FRIDAY 9/25
Friday was the night of Great Conflict at Decibel Festival. Heads had to decide whether to catch the MOTOR Showcase at Crocodile or the Resident Advisor one at Showbox at the Market. I decided to bounce between the two, and began at the Showbox for Cygnus' opening set. The mighty Autechre tapped this young Dallas, Texas producer (aka Philip Washington) to open for them on their North American tour, and a half hour of his rippling, iridescent, Drexciya-/Model 500-like electro jams explained why. They reflected Autechre's early roots in Motor City electro with great eloquence. (More on Autechre's performance in a moment.)

Shifted (aka Berlin-based British producer Guy Brewer) followed with a set that combined the functional with the festive—albeit in his grayscale, industrial overtones. Live, Shifted's tracks um, shift in subtle gradations of intensities in rhythm—usually hard minimalism, but sometimes a Latinized shuffle emerges. Brewer squeezes hedonism from sound sources not typically associated with it (emergency broadcast system and car alarm tones, assembly-line effluvia, etc.). After a while, it seemed as if the music were an automaton running on cruise control, but with a surprisingly groovy gait. The death-metal-looking guy in the front row was really into it.

Autechre took us to the dark side. Valerie Calano

Back at Showbox for Autechre—pronounced AWE-texture, or oh-TESH-ray, if you're French. The anticipatory tension is thick. Expectations always run high for the Autechre live experience, even among brainy oldsters in attendance. (The collective IQ here is likely off the scales.) Playing in the dark with no acknowledgment of the audience, per usual, Autechre (Rob Brown and Sean Booth) unleashed a perpetually morphing torrent of visceral, machine-like sound scenarios. (The best music is paradoxical like that.) They spewed an eternally renewable source of sonic shocks, changing the rhythms and textures about every five seconds with whiplash vehemence. Everyone’s going to need a chiropractor after this show, from trying to move to the violently convulsive sounds. Afterward, Troy Micheau from the Portland band Swahili and solo project Contact Cult said, “There was some dude explaining the show to his girlfriend during the set. You shouldn't even be talking about it.” He's right. It's best to enter Autechre's pitch-black void with eyes closed and mouth shut, and let the complicated madness envelop you. 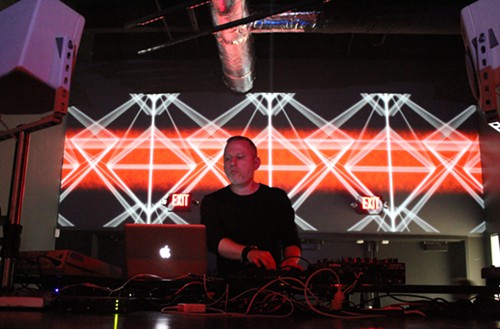 Function made afterhours "super fucked up," as is his wont. Valerie Calano

After a respite, it was off to Q Nightclub for XLR8R After Hours. The paradox of afterhours events: Despite happening so late, the people at them display more energy there than during regular-hours shows. That probably speaks to better artificial and organic stimulants and the levitational rush of feeling like you're getting away with something illicit. And this sensation saturated Q, which filled up fast and teemed with movement. I missed all but 30 minutes of techno-brut hard guy Function (aka Dave Sumner), but what I heard jibed with a friend's description of it as “super-fucked-up.” Marcel Dettmann, in DJ mode, came on next and proceeded to immerse Q's large white cube with XL techno bearing massive percussion and voice-fragment loops. It made you feel like Q was one vast organism throbbing in the engine room of the universe. Even the cups on the tables were dancing to Dettmann's peak-time bangers and klankers. Anyone here at 5 am was sizzling in the synapses. And then with 10 minutes to go in his set, Dettmann brought in a crazy remix or cover of Meat Beat Manifesto's freaky electro-funk classic “Helter Skelter.” Running on caffeine pills and sleep deprivation, I felt like I was tripping hard. Sadly, I couldn't hang on for Vril's 5:30am-7am set, but I heard he smashed it. 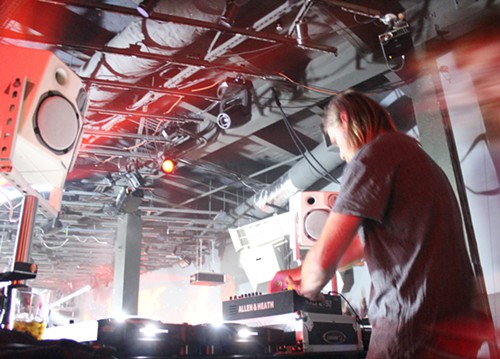 It's that charming Englishman Guy Brewer again, this time under the alias of Alexander Lewis at the Triple Door for the Optical 1 Showcase. He filled this elegant dinner theater with post-Eraserhead soundtrack whir and hum, with desolate oscillations shifting to deep, ominous bass fluctuations. Later, faint traces of poignantly pretty melody tried to slip through the cascades of steel-wool noise striations and frigid tones. Near the end, a hard-won calm materialized, but it was ruptured by some nerve-rattling noise. Cheers, mate.

Dasha Rush stole this showcase. That was the consensus from my informal poll. Her eldritch ambient techno bustled with subliminal activity, sometimes recalling the Arctic chill of classic mid-'90s Biosphere. Around halfway through her set, an unspeakably delicate and beautiful passage arose, sounding somewhere between Brian Eno BFFs Harold Budd and Jon Hassell: very classy company. A later twist into Demdike Stare-esque hauntology and mercurial, scuttling rhythms pleasantly surprised the crowd, as did a sample of an important-sounding man intoning, “No passport, no drivers license, no credit card... Just dust.” She prompted a well-earned standing ovation. I didn't know Rush's work before Decibel, but henceforth, I will surely follow it closely. 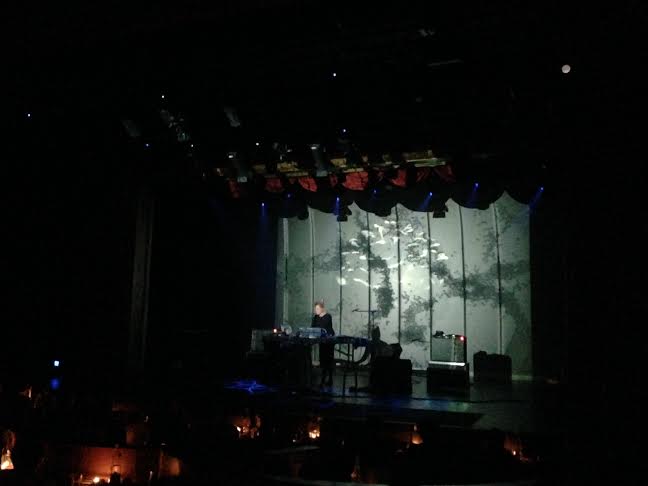 Dasha Rush: It was no Hassell to hear her ambient passages Budd. Megan Mitchell

Up to Neumos for the Kompakt Showcase to see the LA mainstay John Tejada. Recently I read that some people are “over” bass lines in electronic music—as if they're some trite decorative element and not a crucial cog in the machine. Well, I for one still have time for bass lines, especially if they're as sensuously sinuous and full-bodied as Tejada's. What elevates Tejada's tech-house cuts from most in this crowded field are his innate musicality and his virtuosity with bleeps (never underestimate the dance-floor-enhancing power of well-modulated bleeps). He doesn't do anything very weird; rather, he just generates great grooves and sonorous textures in an utterly dependable manner. Tejada's also the only tech-house producer I've heard flip a sample of the Mohawks' organ from “The Champ.” What a killer move. 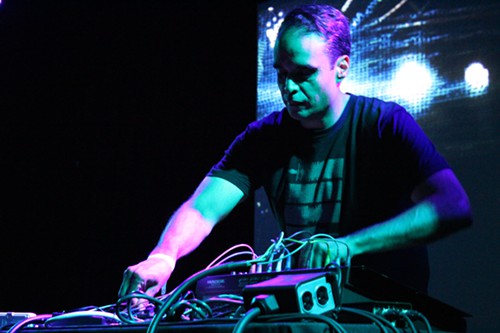 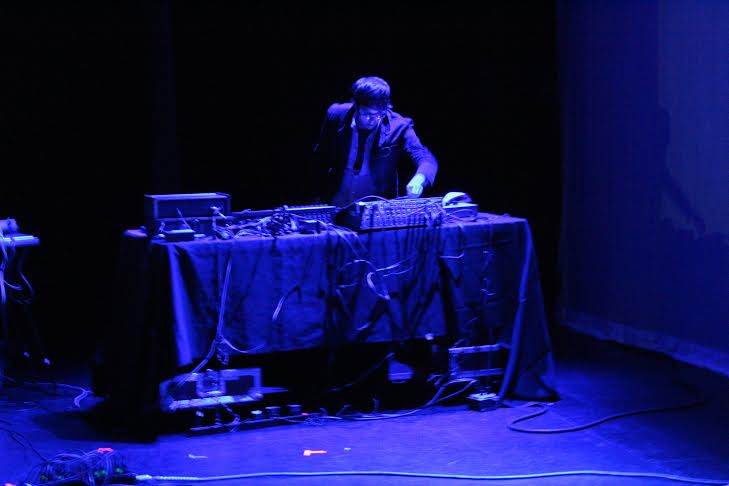 Strategy put some Cascadian tranqility into his dub. Valerie Calano

Fatigue set in hard today. All I could muster was the Optical 2 Showcase at Triple Door. Versatile Portland musician Strategy (aka Paul Dickow) opened things, situated stage right so he could view the geometric imagery on the large screen. Strategy has a distinctive take on dub: He pretty much excises the earth and fire from the Jamaican genre and imbues it with air and water. This approach gives Strategy's dub a hovering and tranquil effect, from which Decibel attendees could really benefit on the fifth day of the fest. His set also had moments of silvery abrasiveness and poinging, glassy tones that kept your neurons on high alert. Perversely, Strategy bust out his most danceable stuff—a swiveling dub-techno joint—in truncated form right at the end. What a tease. 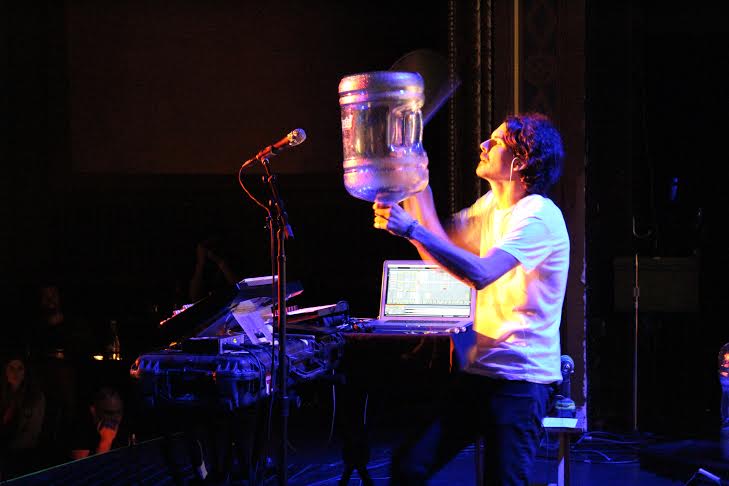 Eskmo came on during the prime time to see the blood moon eclipse. His performance was at least odd: really heartfelt singing and tiny percussion toys mixed with Jamie Lidell-like electronic songcraft. It was atypical Optical fare, for sure. I bounced to try to see the eclipse and so missed Eskmo's use of two huge water jugs. Next time.

Before Eskmo's set, Decibel founder/director Sean Horton gave a speech in his customary fifth-day-of-Decibel hoarse voice. He'd turned 40 the day before and confessed he'd just resigned from his job of 14 years with PlayNetwork and sold his house. Four days before Decibel, Horton's engagement abruptly ended and his plan to move to Portland was thrown into doubt. Talk about a tumultuous week...

“Considering the increasing cost of living in Seattle and no concrete prospects doing what I do, I'm not confident remaining in Seattle right now,” Horton said in an email interview this morning. “There's also a growing sensation that after 20 years in the Pacific Northwest (15 of those years spent in Seattle) that perhaps it's time for a change. Regarding Decibel, it's incredibly difficult to speculate on her future when my own is so unclear. I will say that there was more riding on this year's program than any previous. I put everything I had into Decibel financially, creatively, and emotionally this year, to the point where I was fearful of losing everything and winding up homeless, jobless and bankrupt. Turing 40 this week certainly wasn't helping my state of mind.

“Though the final numbers still need to be tallied, I feel confident in saying that the 2015 Decibel Festival and dB Conference were a success on every level and the prospect of a 2016 edition is looking quite good. In terms of where it would be, that will largely be determined by what career opportunities are out there for me. Considering a week ago the plan was Portland, I'm still just now starting strategize my next move. Maybe someplace sunny?”