You can't tell from this picture but there's actual water running down those rocks. Other sets in Waterfall are ephemeral, silken dream-rivers. Tracy Martin

Waterfall is set in 1930s Siam, which will become Thailand over the course of the musical. The Gilda-like gorgeous American, Katherine (Laura Griffith—in that photo there), is married to an older Siamese diplomat, Chao Khun (Thom Sesma—not in that photo). The diplomat can't love her like she needs to be loved because he's old and tired. Then along comes the strapping, career-driven, west-obsessed Noppon (played by Thai sensation Bie Sukrit—that guy in the photo), who's tasked with showing the lady a good time while her husband plays politics with the Japanese.

And guess what: Noppon and Katherine take a walk through a botanical garden and fall. in. love. But also guess what: that love is forbidden. The two court each other anyway, using their shared love of art as a way to express their true feelings for one another. The diplomatic situation, like the love between Noppon and Katherine, is tense, doomed to fail.

Surkit is charming and sporting. Griffith arrests with her glamorousness and nearly operatic vocal power. But I never really bought the romance between their characters. However, I was too busy letting Sasavat Busayabandh's set and Ken Billington's lights tell the whole story to really care about David Shire's mostly saccharine music and the lack of sparks between the main characters.

The whole play is this pretty. Right after this moment, those giant dream-rivers of kaleidoscope-colored silk scarves float up into the air above her. Tracy Martin

I never thought of myself as the kind of person who'd appreciate a sparkle-fade into a light-painting of a waterfall scene, but, I gotta say, I felt a kind of deep, Disney joy overcome me in those moments and in several other similar moments throughout this musical.

But the set isn't just pretty, it's nimble and smart, too. Six big strips of what looked like ripped paper, upon which painterly renderings of skylines and forest scenes were projected, framed the scenes. As the characters traveled from the golden pyramids of Siam to the markets and secluded sylvan meadows of Japan, the strips would tear apart or join together, reflecting the sheer physicality of travel, but also the thrill and anguish of lovers meeting and departing.

This flux, of course, is happening at the political level of the play, too. Siam is becoming Thailand, Japan is becoming imperial Japan. So the set design isn't just gorgeous to behold, it's constantly reinforcing certain themes of the play in meaningful ways. Only when Noppon and Katherine's love is the most realized is the set fully realized. Otherwise, the set is spare, cold, in turmoil.

Best performance of the evening goes to a supporting actor, J. Elaine Marcos, who plays Nuan, Katherine's recalcitrant servant. You love her the way you love the nurse in Romeo and Juliet. She's the rational anchor who works within her subservient role to usurp her supposed betters, dispensing wisdom only when asked and acting only when necessary. She only has like 1.5 songs, but I laughed every time she spoke. Even when she didn't speak, her sense of comedic timing was sophisticated and her execution precise. 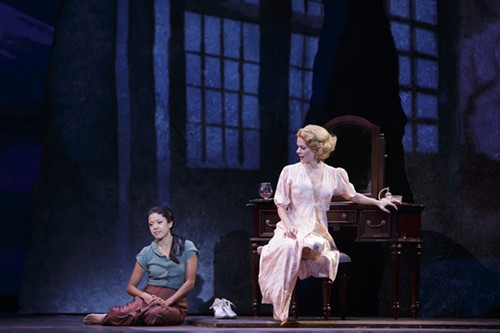 J. Elaine Marcos, on the left, turns in the best performance in the show. Tracy Martin

The other best performance of the evening goes to Lisa Helmi Johanson, who makes her 5th Ave debut as Kumiko, a self-described "Hah-cha-cha girl." Kumiko owns a jazzy bar where Noppon goes to blow off steam. She's a Japanese-American who feels out of place on both sides of the hyphen, and so seems to embody question of what happens when cultures clash, which fuels a lot of tension in the play. That she offered more warmth and magnetism than anyone else onstage made her underutilization even more of a crime. 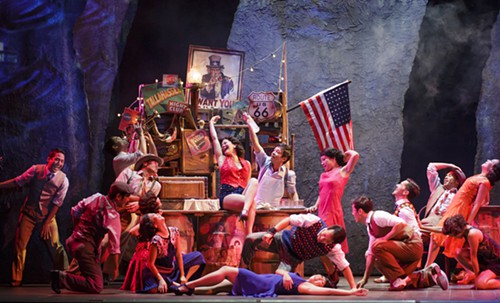 There's Kumiko (Lisa Helmi Johanson) in the center, exploding onto the stage in a fit of rhinestones. Tracy Martin

You're never going to get me to feel moved by a song that contains the word "forevermore," because nothing lasts forever, not even cold November rain. But there are enough jagged and striking moments in the play that balance out and counteract the floral floofloosplosion. Drumming hunks, for instance, break up the floral market scene with rippling abs, athletic feats, and the brute banging of stick on buckskin. And, of course, there's drum beat of World War II, that little Bethlehem toward which all the personal and political action of the play slouches.

Waterfall is the seventeenth new musical produced by the 5th Avenue Theatre. Nine of those have gone on to Broadway, and I wouldn't be at all surprised if Waterfall became the tenth.