Local climate activists and former mayor Mike McGinn have been trying to get an audience with Bill and Melinda Gates for more than a month to discuss the Gates Foundation's investments in fossil fuels. They've demonstrated outside the Bill & Melinda Gates Foundation almost every day, but the philanthropist couple has met activists' request for a meeting with silence.

On Saturday, activists tried a more direct route to the Gateses' attention. A little after noon, roughly 50 demonstrators lowered themselves into kayaks and launched toward Bill Gates's Medina compound on an overcast Lake Washington.

Bill Gates has faced increasing pressure to join the divestment movement ever since UK newspaper the Guardian launched its divestment campaign in March. That same month, Guardian reporters dug up tax filings from 2013 showing that the Bill & Melinda Gates Foundation had $1.4 billion invested in major fossil fuel companies. Ahead of the Paris climate talks this November, the newspaper has asked both the Gates Foundation and the UK's Wellcome Trust to divest from fossil fuels.

Seattle activists are escalating their tactics, too.

Background: a house with 18.75 bathrooms, according to the King County Assessor. Foreground: kayaktivists. SB

The Gateses' $125 million, 18.75-bathroom estate sits just a few minutes' paddle away from Medina Beach Park, and organizers were easily able to google the address from their boats. The home was built in 1994, the same year that the United Nations Framework Convention on Climate Change—a nonbinding pledge to lower greenhouse gas emissions—came into effect. 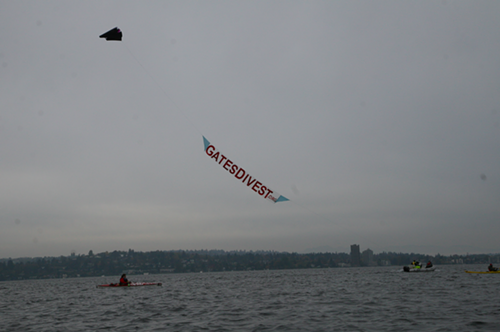 Four figures eventually materialized on the Gateses' dock, and at least three of them appeared to be children. It was too far away to tell whether the tallest among them was Bill Gates himself, but the group watched kayaktivists unroll bright-orange signs that read "KEEP IT IN THE GROUND" and "CLIMATE JUSTICE" for several minutes. A motorized boat used a kite to stream a banner that read "GATES DIVEST.org" behind the kayaks.

To date, Bill Gates has consistently argued against divestment. "I don't see a direct path between divesting and solving climate change," the founder of Microsoft told the Financial Times in June. "I think it’s wonderful that students care and now the pope cares. But that energy of caring, I think you need to direct it toward something that solves the problem." 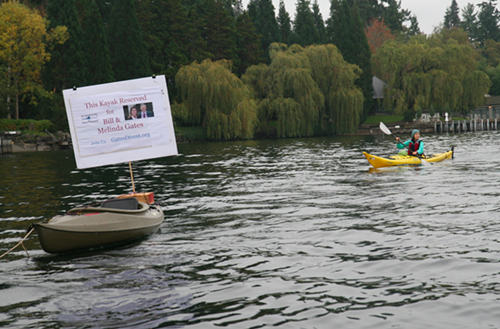 A true display of Seattle's capacity for passive aggression. SB

In a more recent interview with the Atlantic, Gates expanded on what he thinks will solve the problem: high-risk investments in energy research and development coupled with a carbon tax. On the technology side, Gates has pledged $2 billion.

But activists say Gates overestimates the capacity of technology and the private sector to solve the problem of climate change. "It's the market that got us into this mess," Sarra Tekola, a prolific Seattle climate organizer, said from a motorized boat full of reporters and photographers on Saturday. "Climate change is the [market's] biggest externality. We're not paying for the pollution we put out into the sky. Will he be able to acknowledge this market externality? Will he be able to acknowledge this market failure? Because if he's not, we call him this big moral leader, and is it really moral to be invested in the industries that are pushing us toward extinction?"

Sarra Tekola, 23, looks toward the Gates compound from her perch on a motorized boat full of reporters and photographers. SB

At the same time, Tekola said, Gates has underestimated "the energy of caring." She cited divestment campaigns against the South African apartheid regime and tobacco advertising as successful movements with impact.

"Divestment has the power to shift cultural norms," Gates Divest organizer Alex Lenferna said into a megaphone on land, before the kayaktivists launched their boats. "Every single divestment movement in the past has allowed us to introduce legislation to restrict the offending industry, and in this case, the fossil fuel industry. Even more, by exposing the carbon bubble, by exposing the fact that the fossil fuel industry's business model is out of line with a sane future, what we're doing is shifting the market and the cultural norms." 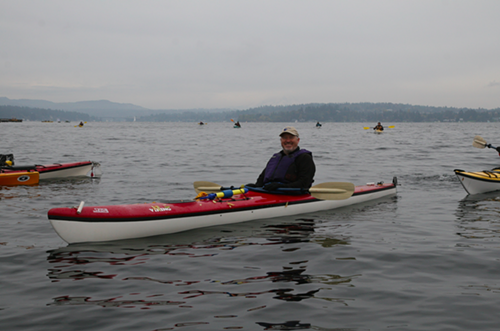 Former Seattle mayor Mike McGinn: "Portlandia, you've got nothing on us." SB

If shifting cultural norms is the goal, there's a reason why divestment campaigns primarily target endowments, churches, and charities rather than business leaders—and why the focus is on morality above all else. The aim of divestment is to remove the social license with which industries and regimes operate. If the public decides that it's overwhelmingly immoral rather than simply amoral to invest in fossil fuels, activists believe that today's market—the one that's weighted in favor of the fossil fuel industry—will lose its authority to dictate climate solutions.

That's why divestment activists are specifically asking Bill Gates to work as a moral leader rather than a business one. They're also quick to point out that the effects of climate change threaten to undermine anti-poverty work across the globe.

"The moral bind is being a philanthropist, saying you're helping people," Daniel Gagnon, a first-time kayaktivist, said. "If Bill Gates really wants to help people at the margins, environmental justice is where he should be investing."