A Trip to Jimi Hendrix's Grave with Ken the Ghost Hunter 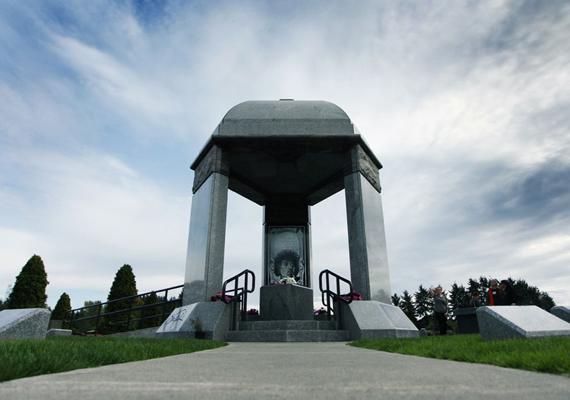 "Jimi, are you there? It's me, Ken. I'm a paranormal investigator." KELLY O
Sponsored

Standing under the 30-foot-high marble dome that encases Jimi Hendrix’s grave, Ken Arnold scanned AM/FM radio frequencies with his SB11 Spirit Box. Nothing but static from the device could be heard. No signs of Jimi. Not even a hint of his song “Voodoo Child (Slight Return).” There was Nag Champa incense, though, wafting out amongst flowers, letters, guitar picks, and one cigarette lighter with a nude woman on it.

“Scanning radio waves with the Spirit Box creates an energy field spirits can hold onto to communicate,” Ken says. Then he walks around the tomb holding out a K2 electromagnetic field meter and a Mel-Meter EMF/temperature gage, but again finds no recordable signs of Hendrix, or his Stratocaster guitar.

“When we’re investigating a place, we ask the spirits questions,” Ken says. “We will ask—is there anyone here that will communicate with us? Do you know you are dead?” KELLY O

Ken runs a team of paranormal investigators in Seattle and Tacoma who identify as the Puget Sound Ghost Hunters. As he was getting out of his car in the parking lot of Greenwood Memorial Park in Renton, where Hendrix is buried, he explained he always needs fresh batteries. “Spirits need energy to communicate. They’ll use light bulbs, cameras, wiring, whatever,” he says. “I replace all batteries before an investigation.”

I ask if he should consider holding the Spirit Box upside down, with his left hand, the way Hendrix played guitar. “No,” says Ken. “You wouldn’t be able to read any levels that way.” 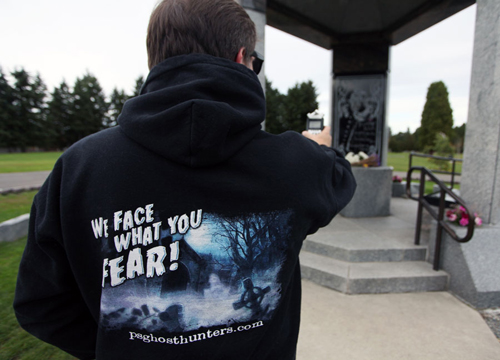 “I replace all batteries before an investigation,” Ken says. KELLY O

The thing Ken never wants to do is provoke an unhappy spirit. “PSGH aims to identify and help spirits move on, if that’s what they need. For people experiencing paranormal activity, we offer free, confidential consultations. We thoroughly research the history of a location to find who lived and died there.” 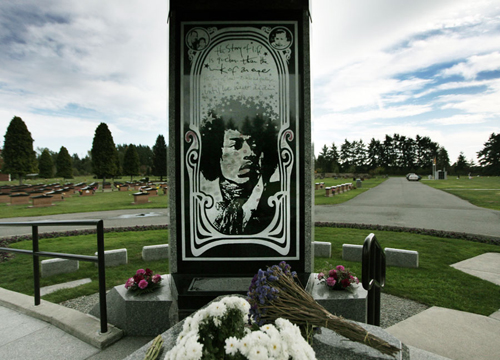 Ken tells a story about PSGH’s 399th investigation, at a house in Tacoma built around 1910. The ghost-hunters were contacted by the owner of the home who was doing a remodel of the upstairs bathroom. The owner reported voices, and the sound of someone walking up the stairs, even though he was in the house alone. The story was that a 26-year-old husband we'll call Dennis had been murdered in the house, and the rumored suspects included his 24-year-old wife. The wife's aunt had connections to local government. Dennis's death was officially ruled as an overdose by ether, but according to Ken, others thought it looked more like a murder based on how the body was positioned.

Ken said the team was able to establish a solid connection with Dennis’s spirit, and that the following exchange took place:

Eventually, Ken says he got Dennis to admit that his wife had murdered him. At that moment, Ken reports, the right rear leg of his chair was pulled up and lifted to the left, sending him crashing down to the hardwood floor. (Here is recorded audio of the event.) “It felt like I was slammed to the ground without anyone touching me,” says Ken. “The leg of the chair shattered like glass. Pieces were found 30 feet away. I thought I’d broken my arm.”

As Ken was coming to his senses, getting on his hands and knees to stand up, the story of how Dennis was murdered popped into his head. It involved Dennis's wife pretending to leave town but actually hiding with the ether in a compartment behind the wall in their bedroom, then murdering him after he fell asleep. Ken would like to return to the location for another investigation. He has some unanswered questions. 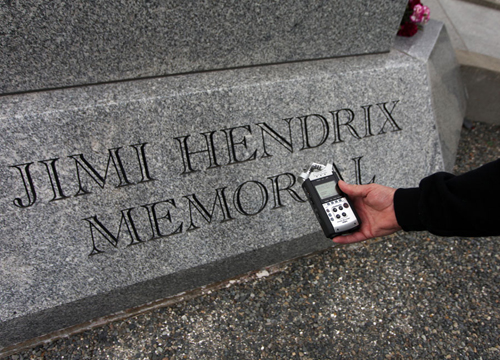 "Nothing's guaranteed when you're investigating the paranormal,” Ken says. "Jimi, are you here? We'd love to talk to you." KELLY O 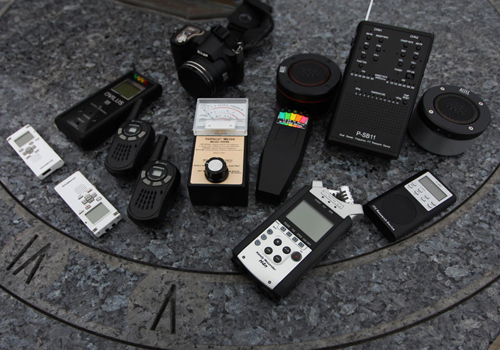 Ghost hunting gear. "If you've got a ghost, or a negative spirit... don't piss it off. One of our team members is also a Christian minister. Once a spirit we were investigating called her by name, then said, 'Fuck you, cunt.'" KELLY O

"Nothing's guaranteed when you're investigating the paranormal," he says, hovering over Hendrix's headstone with his multi-colored K2 meter. "Jimi, are you here? We'd love to talk to you."

"What we do is all based on theory," he continues. "People have different opinions about what paranormal activity is. Some say spirits are afraid to go to the light, and that they have unfinished business. Some say spirits don’t know they're dead. Just because people write books and have TV shows doesn't make them 'right' about this stuff. Also, I'm not in this for money, I'm in it to help. I'm just naturally drawn to it.”

A stillness rose as we milled around Hendrix’s memorial. The incense smell had faded. Before we left, we asked Jimi if he knew how Dennis died, but Jimi had nothing to say. 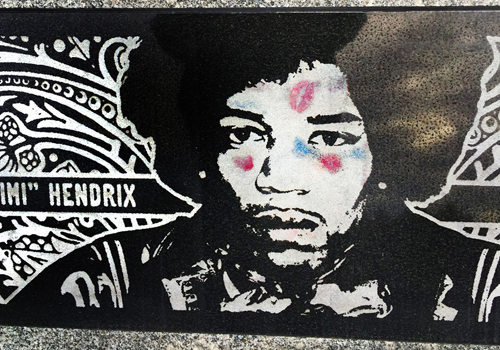 A stillness rose as we milled around Hendrix’s memorial. The incense smell had faded. KELLY O 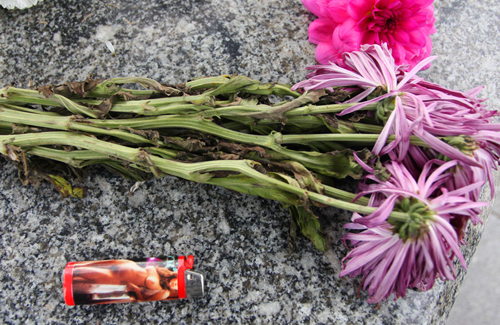 Some flowers and a lighter with a nude woman on it. KELLY O 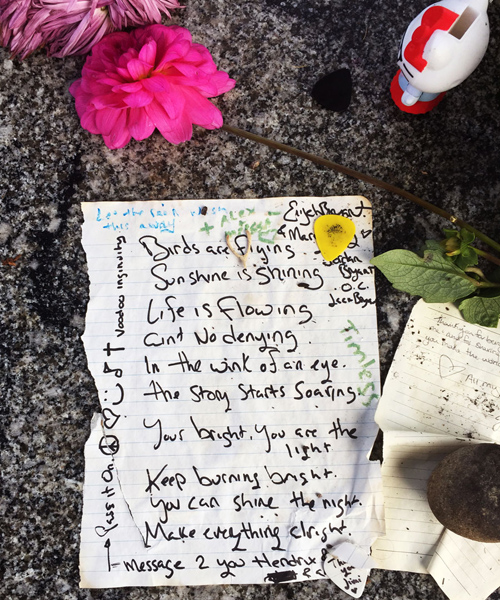 A Jimi poem, a wishbone, and a pick. KELLY O
Sponsored

Slog PM: GOP Predictably Says No on Voting Rights, FDA Says Let's Get This Party Started With a Vaccine Mix, Seattle Warned That the Real Rain Is Finally Coming

This Week’s Best Comics: Time-Traveling Smugglers, A Sexy Super-Ant, and How to Make Your Words Look Good