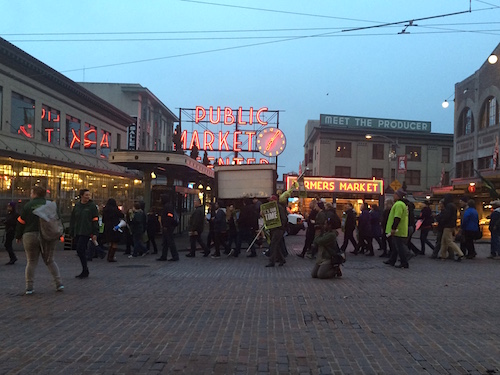 About 75 people marched in front of the Starbucks at Pike and First today to demand changes to the way companies like Starbucks schedule their employees. HG
Sponsored

As part of a national day of action on workers' rights, Seattle fast food workers, baristas, and activists marched from Westlake Park to Pike Place Market at sunrise to demand changes to the way their scheduling works. Workers said they often get notice of their schedules, or changes to their schedules, with less than a week's advance notice. They also spoke about inconsistent hours from week to week, making it hard pay their bills.

In a city that's already passed a (phased-in) $15-an-hour minimum wage and paid sick time, scheduling reform could be the next big labor fight. Elsewhere in the state and nation, workers staged similar rallies for higher wages and better treatment. In Seattle, a modest police presence stood back as protesters blocked morning traffic at First Avenue and Pike Street for about a half hour.

As speakers emphasized this morning in Seattle, even a higher hourly wage isn't enough to live on if scheduling is inconsistent.

Dmitri Lucal, a 19-year-old employee at a McDonald's in Ballard, said today's action was to "put together the pieces of the puzzle" for workers who have unpredictable hours each week. Lucal said he and his coworkers often don't find out about schedule changes until two or three days before they're supposed to work. "$15 [an hour] is incredible," he said, "but how are we going to have better lives if we don't even know we're going to get those hours?"

Last-minute scheduling changes make it harder to go to school, work a second job, or, you know, just live your life. As Tobias wrote when covering a new restaurant industry study recently: "One of my least favorite troll arguments—that tired 'pull yourself up by your bootstraps, get an education, and get a real job' bullshit that seems to plague any discussion on restaurant compensation—is neatly debunked by the fact that 52.5 percent of tipped restaurant workers reported daily changes in their schedule, a practice which, according to the study, 'served as a barrier to attending higher education.'"

Starbucks barista Ilana Greenberg, 28, said she has worked for different Starbucks locations on and off for about a decade and is calling on the company to require at least two or three weeks advance notice of schedules.

After a New York Times story last year highlighted the erratic scheduling practices at Starbucks, the company promised to improve, but a recent report showed they weren't keeping their promise. Starbucks workers at today's action said it's mostly fallen to store managers to decide whether or not they'll offer schedules further in advance, meaning practices vary widely from store to store. (The company did not immediately return a request for comment.)

That unpredictability is also due in part to employees calling in sick. Like in most service jobs, Starbucks workers say they're responsible for finding someone to fill in for them if they're sick. That means they either ask a fellow employee at the last minute to cover for them—resulting in more unpredictability for that other worker—or they work sick.

Darrion Sjoquist, a 19-year-old Starbucks barista, said he has been called in to cover shifts at ten Starbucks locations across the city.

"Generally, I don't say no because I know how awful it is to be sick and you can't find someone to cover for you," he said.

"There's almost an implication that you're in trouble or doing something wrong for being sick," Sjoquist said.

Because of that, Sjoquist called on Starbucks to increase staffing or create a better scheduling system to make it easier to cover for employees who are sick.

"If Tinder has a location-based app for people's needs," he said, "then I think Starbucks can figure something out."

The movement is being organized by the labor-backed group Working Washington. That group also helped organize local fast food workers who went on strike in recent years, sparking the movement for a $15 minimum wage.

The group has yet to coalesce around specific policy demands, but San Francisco may offer a path for local law-making. There, a wide-ranging Retail Workers' Bill of Rights requires large employers to give workers at least two weeks' notice of their schedule and one week's notice of changes.

But, if the lack of awareness and enforcement around sick time teaches us anything, it's that local laws aren't always enough.

"The problem with doing this through laws is sick leave is on the books and I don't even know how to use my sick time," Greenberg said. "We want to get the attention of the companies to see if they will change things internally so we will actually see change."

I've updated this post to correct a gender pronoun. I regret the error.