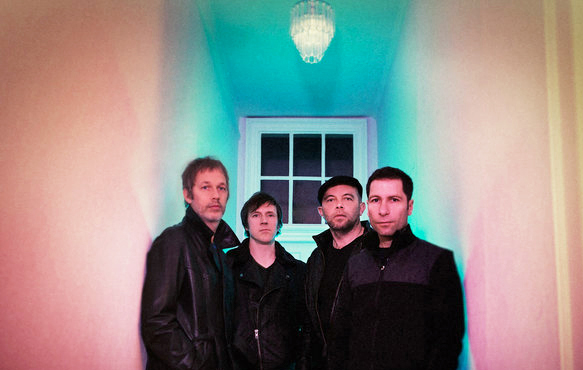 Twenty-five years ago, Ride’s album Nowhere surged out of Oxford, England and into the '90s with a mammoth, definitive “shoegaze” sound. Listening to the elongated stretches of driving, convex rock music, you could see the curve of the earth from a porthole if you were high enough. In the shoegaze-rock canon, Nowhere may be the Holy Grail. On November 6, Ride released a 25th anniversary CD+DVD+LP called Nowhere25, featuring the expanded 15-track album, and a live recording of a concert at London’s Town & Country Club from March, 1991. Currently, Ride are touring with their original lineup: Andy Bell, Mark Gardener, Laurence Colbert, and Steve Queralt. Vocalist/guitarist Gardener spoke from the home studio at the end of his garden in Oxford, England. Someone was having a barbecue next door.

This garden-studio is sort of an eco thing. I spend most of my time here when I’m home, mixing and writing. I’ve got my guitars and all my bits and pieces. I can smell paraffin from the barbecue next door. A burning sort of char. I’m glad I’m not eating what’s being cooked.

What’s changed since Nowhere came out in 1990?

What’s changed is we’ve gotten older, and wiser [laughs]. A bit more ragged? We’re more men now, and not stoned boys. But I’d say the fundamental things about life we questioned with Nowhere haven’t really changed. I’m still as confused and in the dark about certain things now as I was then. Love and loss, I still have lots of questions about those things, and not so many answers. I’d also say I’m more excited about music now than I ever was. If it wasn’t that way I don’t think we’d be doing this. I think all the guys share that enthusiasm. When we’re playing, something is there between us, it’s always been there. The things that made us tick before still make us tick now. 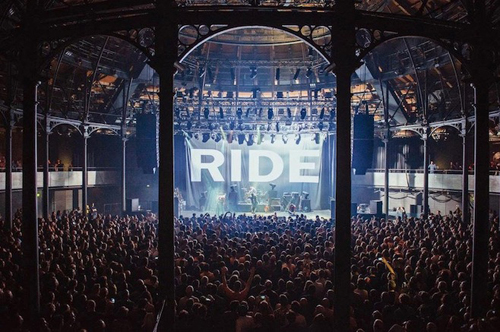 Did you mean to be posing such deep questions about life 25 years ago? Or were you all just high, and jamming?

I think we were just knocked around by life. And knocked around by love. The first time things happen to you, you’re not at all prepared for it. That first step out, when you leave home. You’re on your own, or as a band. Banbury, England is a pretty dark place. It’s violent. It’s not the nicest place to be. We found our own sort of sunshine and good vibes making music together in a room, avoiding the negativity of the town. It’s a rough market town. It can be beautiful, as well.

By sunshine you mean drugs and pulsing rock music run through a phaser effect, right?

For the start of Ride, a lot of it was escapism. And phaser [laughs]. We were doing something where we could escape that place, and escape that dreaded feeling of what the hell are we going to do with our lives? The music was all a dream. In my head I didn’t want to get my hopes up that it would work out. My thought was to just have fun with it, and to enjoy the ride while it lasts. Excuse the pun [laughs]. I don’t think anyone even imagined it would go off the way it did. Once it got going, we strapped ourselves on and tried to hold it in the road, until it crashed in 1996.

I’m going to have penalize you 15 points for the pun.

Ah. Sorry. It just slipped out. It does come up, though. It is a thing a movement. I’ll try not to say it again.

I’ll let you off with a warning this time. If you had to estimate, what’s the longest jam you’ve ever played? Has Ride ever played a 90-minute jam? Be honest.

“Grasshopper” is up there. It probably isn’t the longest jam we’ve ever played. But it’s one of the longer ones where we hit record and then just jammed. After that, we did a “Coming Up for Air” tribute to Sonic Youth, which might have been longer than “Grasshopper” in about four different movements. But it was a bit odd because we hadn’t seen each other in a while. We jammed a lot. Things that became “Drive Blind” and “Dreams Burn Down”, we probably jammed on the ideas for an hour each before we thought maybe we should add some words. And maybe we should cut it down from an hour to three or four minutes [laughs]. A lot of the early Ride music came out of jamming. I love that feeling. Songs would morph along the way. They’d start as one thing, or maybe another song entirely, and they would end as something we could call Ride.

I do, too. There’s something really magical about it. If the wrong band does it, it can be boring. A big influence on Ride was the krautrock movement, which gets overlooked sometimes because people usually talk about My Bloody Valentine or the Beatles and the Smiths and all that. But krautrock really gets it for me, in that trance-inducing, hypnotic thing. I’m fascinated by bands that can hit hypnotic strides with their music, and just take a crowd over. Trances are at the root of a lot of music. Zulu tribesmen would get themselves in trances banging a drum. Then they’d eat mushrooms and attack the English.

Where does your mind go when you play an extended jam? Do you think about Zulus the whole time?

To the Zulus, yeah, usually, about to go to battle [laughs]. I think because you’ve got people in front of you you’re always aware. It does feel like you leave and go someplace. I don’t know where you go. You might think of mundane things. There’s a sort of consciousness there.

So after jamming a song for 18 minutes in front of a couple thousand people, you’re thinking about folding laundry? No way.

Yep. Sorry to disappoint you [laughs].

Do you ever get so deep in a trance-jam that Andy Bell [guitarist] turns into some sort of Cookie Monster?

Yes, all the time. That’s when I know things are going well, when he gets big furry hands and turns into the Cookie Monster. Since I’m in the middle of the stage, I find myself watching Lars [drummer]. He’s another Cookie Monster. When we play “Nowhere,” I feel a kind of weird voodoo. There’s a trust in the band, whatever direction a song takes. We’re able to let it go where it wants to go. There’s no formula. I lose interest in music when there’s a formula. Formulas are boring.

Will there be new Ride music in the future?

The Zulu trance jam is where we’ll be starting from. Right now we’re just so into doing these shows. When we’re finished in December, maybe we’ll think about what’s next then, and put ourselves into that trance headspace, and paint ourselves in warpaint, with the Cookie Monsters in tow and see what happens.