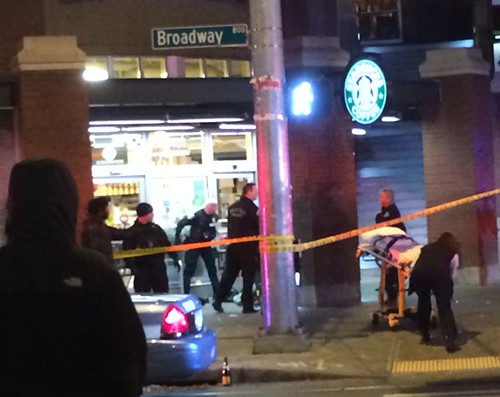 At approximately 1 a.m. on Sunday morning, officers responded to shots fired at the intersection of Broadway and Pike. Sam Osborne

Steven Severin is the co-owner of Neumos, Moe Bar, and Barboza. David Meinert owns Comet Tavern, Lost Lake, Big Mario’s, 5 Point Cafe, and Grim’s. In light of the recent shootings at Pike and Broadway, they talked to us about the state of Capitol Hill safety and policing.

What are your thoughts on the shootings?

Severin: It’s a safety issue. We need more beat cops outside, on the street, walking up and down Pike, Pine, and Broadway every Thursday, Friday, and Saturday night until 3:30 or 4 a.m., until everybody is gone. Seattle has been the fastest-growing city in the country for the past two years, I believe. Amazon and tech companies are hiring a lot of people. They tell them to come to Capitol Hill. We’re the first arts and entertainment district in the city. There’s so much going on any given night in the Pike/Pine area, and we just don’t have enough police to handle the amount of humans coming through. Heavy numbers of people are packed into a confined area. And there will only be two to four beat cops out, if we’re lucky. Apparently the people involved in this shooting got in an argument, and the guys got in their car, drove by, and started shooting. If those guys had seen a cop in front of that QFC on that corner, I have to think the gunman would have thought twice before pulling the trigger.

I’ve been thinking we probably won’t get much of a reaction from the city council, or from our mayor, or from our police department, because nobody died. I think if someone had actually died, we would see change. But I don't this will make a big enough media splash to get them to realize this is a huge problem. I’m tired of being angry. It makes me sad. I don’t want to see people get hurt. I’m the biggest pacifist there is. I hate guns.

We’ve been asking for more police presence for a while. We met with East Precinct a few months ago and they said they were increasing the number beat cops for the summer. But, people go out all year long. And guns are so prevalent now, so easy to get.

Where were you when the shootings happened Saturday night?

I was inside Neumos talking with some friends. The show had let out, and we were about to leave. Then one of the security guards told me there’d been a shooting outside and that we should stay inside.

Why aren’t there more beat cops?

It’s all money. It’s all financial. It’s not in the budget. In this last budget, I think I read they are budgeting for 40 extra cops for next year’s Seattle PD. Compared to how fast we’re growing that’s nothing.

When you met with East Precinct and said, “Capitol Hill needs more police presence,” what did they say?

They agree. It’s just a matter of budget. It would be interesting to know how many people they have on shift for a Saturday night in the East Precinct. How many police officers are out there? I think they said that it’s 16. What are we, 70,000 people in Capitol Hill now? Sixteen police officers for 70,000 people? And not to mention all the people that come into Pike/Pine Thursday through Saturday to have a good time. There are people now that won’t go out on Pike on a Saturday night. People are scared. The parking lot above that QFC where the Bartell Drugs is super sketchy.

As a business owner that’s been on Pike for ten years, I have said we’d be willing to pay to have police out on our corners. We would gladly share that cost with some of the businesses around there. We brought that up in the meeting with East Precinct. But they won’t let us do it because of what happened in the late ’90s/early 2000s. We used to be able to pay to have cops out there, but some cops were taking advantage of it. We want our patrons to feel safe.

So you’ve said to them that your businesses would gladly pay for more police presence, and they said, “Sorry, we can’t do it, because our cops are too crooked” ?

Basically, yes. They did say it was maybe something we could look at doing again. Then it got sort of put on the back burner. We’re all busy running our businesses. It stinks we also have to focus on making sure the entire neighborhood is safe because the police can’t. I understand they’re understaffed. And I understand that most of them are doing the best job that they can. But we have to fight to get the beat cops out of their cars and onto the street. They were just sitting in their cars, and we had to say, “You guys gotta get out. People need to see you. If they don’t see you, why would they be fearful of you? If people know they can commit a crime and run away because you’re in a car and you can’t get to them, why are they going to be worried?” If cops are standing out there on the corner of 10th and Pike, it’ll make people think twice. At least most people will, and that would be enough to curb the violence.

How will this latest incident affect Neumos? Will it intensify things? As if your security and staff aren’t already on high alert.

We’ll debrief and go over how it was handled. Our team did a great job. I’m sure Seattle Nightlife and Music Association (SNMA) will get with David Meinert and the rest of the crew and see what we can do about getting a hold of the mayor, and the city council, and start hammering on them again to figure out a way we can get more police on the street.

What’s the solution? How can we get more police on the street?

The city’s always crying that it’s broke. And I’m the first one to say I’m happy to pay more taxes. Shit costs money, we need to pay for stuff. That’s how it works. I have no problems with that. But we need to get them to understand that there are all these new businesses, we’re all paying taxes, and we’re creating so much more revenue for the city. If you keep us safe, then you’re going to have more businesses popping up. If it gets to the point where people are too afraid to come to the area, and we’re losing money, and business are shutting down because of it, they’re going to lose a lot more money than they would if they put that money into more beat cops. I’d really like to know how many beat cops are out on the street during a weekend night. I didn’t see any last night. I was cruising around, and I didn’t see one.

Did you like the experiment in August where they blocked off some Capitol Hill streets at night, and made areas pedestrian only?

I thought it was great. The police liked it, too, because it spread people out and they could see what was going on. When it’s less crowded like that, I think there’s less of a chance for problems. I felt far safer waking around the area at 1 a.m. with it spread out like that. I was skeptical at first, but I thought it went really well. The people that didn’t like it were Uber drivers and other people driving. I’d like to see the closed-off-streets plan implemented.

What will happen next, concerning these recent shootings? What would you like to see happen?

I’ll get together with our team and talk about what should happen. We’ll put our heads together with SNMA. I’m curious to see if people will reach out to us about it. I imagine the city council, the mayor, and the police chief will be saying something. But I also speculate they don’t want to get too deep into it because everyone wants more police and beat cops, and they don’t have the budget for it.

We really should have some sort of alliance group for Capitol Hill. There’s a group of Broadway merchants that meets, and puts money into a fund for clean up and things. It would make sense to have some kind of a group like that of Pike/Pine businesses, so we’re talking, for the good and the safety of all of us. We’ve gone through this before to some degree. We used to have groups meet with the East Precinct, and the fire department would be there, and people could air their questions and concerns. But it hasn’t happened in a while. Business owners are some of the busiest people around. I think it’s time to make some time for us all to get together.

What are your thoughts on the recent shooting, and on the state of Capitol Hill safety? Do you feel the police presence is adequate? Is there anything you think needs to be dealt with?

Meinert: I don’t know enough about the shooting to form a lot of conclusions yet. It seems telling the gang unit is involved. Last year when we had gang activity in the neighborhood, the mayor took the lead and increased emphasis patrols, used undercover officers, brought in the gang unit, and we saw both bike and foot patrols. While some of those emphasis patrols are reportedly still happening, they seem to have decreased significantly, and I think it would be appropriate to discuss increasing them. But it’s important to note that emphasis patrol officers were close by and responded quickly. So more police alone isn’t some sort of silver bullet solution.

My perception is that violent crime in the neighborhood is down overall, but having two shootings, the one this morning and the recent one at the Baltic Room, is troubling to say the least.

Right now I’m left with a lot of questions. Who did the shooting? Who was shot? Where were they from? Why were they in the neighborhood? Were they patrons of a particular business? What short-term steps can we take to keep this from happening again? What long-term steps?

Slog PM: Mandatory Masking, The Return of the Jet Man, and SPD Is Still Fighting Over Who Was Responsible for Gassing Capitol Hill

Our Top Recommendations Around Seattle This Weekend