Is Donald Trump a Fascist?

2
If there's such a thing as stochastic terrorism, then can't Trump be called a stochastic fascist?
originalcinner on November 30, 2015 at 12:20 PM · Report this 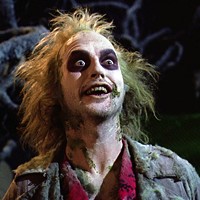 3
The technical term is "douche nozzle."
the_ghost_of_mrj on November 30, 2015 at 12:46 PM · Report this
4
Caveat: as historian/blogger/pundit Josh Marshall notes at talkingpointsmemo.com:

For all of those writing articles announcing that Donald Trump has now officially become or embraced "fascism", I regret to inform you that there's really no clear definition of fascism, much as the harder left and right has imagined otherwise for decades. In any case, labels hardly seem relevant. What is relevant is that roughly a third of the voters Republicans will need to win the presidency next year now support Trump - this version of Trump, a candidate running a campaign which is increasingly open in its racism and militant in its nonsense.

7
@3: agreed, but that doesn't really distinguish him from the rest of the deep field of excellent Republic candidates.
originalcinner on November 30, 2015 at 1:28 PM · Report this

8
If it makes anyone feel better, he'll never be president. That possibility ended the moment he lost the Latino vote.

Democrats and Republicans alike need immigration from Mexico to continue, forever. It's the only way their respective versions of the economy can continue.

Repubs will beat the racist drum when they need to rally the idiots, but in the end, they will never say no to what they consider cheap, disposable labor.

Dems openly support immigration because that's part of their brand.

I support immigration because it's the right thing to do, which is another thing entirely. I will vote for whomever the Democratic nominee will be, because they're less awful. Enough other voters feel more or less like I do, and they'll do likewise.

Bush vs Clinton would have been a close race, because the average voter is lazy and many would vote for whichever candidate they'd rather have a beer with or some equally insane qualification for the leader of the free world. But Bush thought he just needed to show up and we'd all nod knowingly. Instead, we've all been playing the much more fun What Did Trump Say Today game.

It'd be fun to watch anyone lose to Clinton, but Trump? It won't get that far. If the GOP hasn't had him killed by then, he'll split the conservative vote at best come November. For the Dems, there's only one candidate, and there's never actually been another. This is coming from someone who continues to send $ to Bernie. It makes me feel better, I guess.
yelahneb on November 30, 2015 at 1:53 PM · Report this

http://fivethirtyeight.com/features/dear…
yelahneb on November 30, 2015 at 2:38 PM · Report this
10
Fascist more appropriately describes people who suppress free speech on college campuses. If the left had their way they'd extend the same thought policing to all of society.
robot ghost on November 30, 2015 at 2:58 PM · Report this
11
@10 Go to the next Trump rally with a blacklivesmatter sign. Or better yet go to any Republican candidate forum with an anti-NRA sign.

"America, thanks to Trump, has now reached that fork in the road," Neiwert writes, "where it must choose down which path its future lies—with democracy and its often fumbling ministrations, or with the appealing rule of plutocratic authoritarianism, ushered in on a tide of fascistic populism."

Admittedly, I just can't seem to get myself worked into a lather over Trump. Sometimes I think this country just NEEDS to satisfy its impulse to go full-on batshit, speed up the inevitable, let the shit hit the fan, and let all the resulting suffering bury us in a tidal wave starting at one coast and plowing straight through to the other at last. Only then we'd learn. Only then could true progress proceed.

Other times, I remind myself that democracy is an extremely poor premise for good governing in the best cases, and since companies can essentially buy votes in our case, we're way, way worse than that.

Sometimes I think to myself, "have I gone batshit?" There are actual people who maintain jobs and vote Republican, who accept Rush Limbaugh's wind baggeries as god's own truth. There are people in this day and age who accept that Santa Claus is real as the war of Christmas! Mon dieu.

It's Monday. I'm bitchy. Donald Trump! God bless us everyone.

15
Before throwing the "F-Word" around, one should have a good understanding of it. And not just a Wiki one. Trump is nowhere near F. He's an A-Word. This makes the OP look pretty lame.
Thrill Killer on November 30, 2015 at 7:57 PM · Report this
16
@10--the political left doesn't pass "Don't Say Gay" bills, it doesn't pass bills mandating that "Creation Science" be presented as a valid theory in science classes, and it doesn't pass bills mandating that anti-abortion (and medically inaccurate) "counseling" be presented to a woman seeking to end a pregnancy.
Clayton on November 30, 2015 at 10:18 PM · Report this
17
Sometimes I think this country just NEEDS to satisfy its impulse to go full-on batshit, speed up the inevitable, let the shit hit the fan, and let all the resulting suffering bury us in a tidal wave starting at one coast and plowing straight through to the other at last. Only then we'd learn. Only then could true progress proceed.

20
I couldn't possibly care about anything anyone says about Trump's potential fascism EXCEPT Dave Neiwert, whose historiography and track record on this stuff is virtually unimpeachable.
Fistique on December 1, 2015 at 10:09 AM · Report this
21
The thing about the fascist impulse is that it is ubiquitous, re: http://interglacial.com/pub/text/Umberto…

Eco's point is that these 14 features of what he calls 'Ur-Fascism' exist in every human culture - and 'true' fascism (political rule by fascists) emerges when a large enough percentage of the whole population sign on to a large enough number of 14 specific myths (or, bullshit stories used by people to explain their experiences to themselves). -So the question of whether Trump a fascist or he merely play one on TV is irrelevant. He furthers each and every element of Ur-Fascism. The man is beyond dangerous (irredeemable stupidity not withstanding), Neiwert is absolutely right.
NoDzoe on December 5, 2015 at 2:08 PM · Report this

22
Every time an article, comment or mention of Trump pops up - it helps him stay around a little longer. If everyone would just STFU already, perhaps the curtain on this shitshow would start coming down. *pause* GODDAMMIT, I FELL FOR IT TOO. Ugh.
6 on December 9, 2015 at 6:23 AM · Report this