#GivingTuesday and a Look Inside the New Nickelsville in Ballard

From the sidewalk outside, it's a pretty quiet unassuming place. You really only see the Tiny House Constructions and the fence. Kelly O

Inside, I met resident and Nickelsville Head of Security, Steve Friberg. A Ballard neighbor gave him this hat. He said it fits perfectly. Kelly O 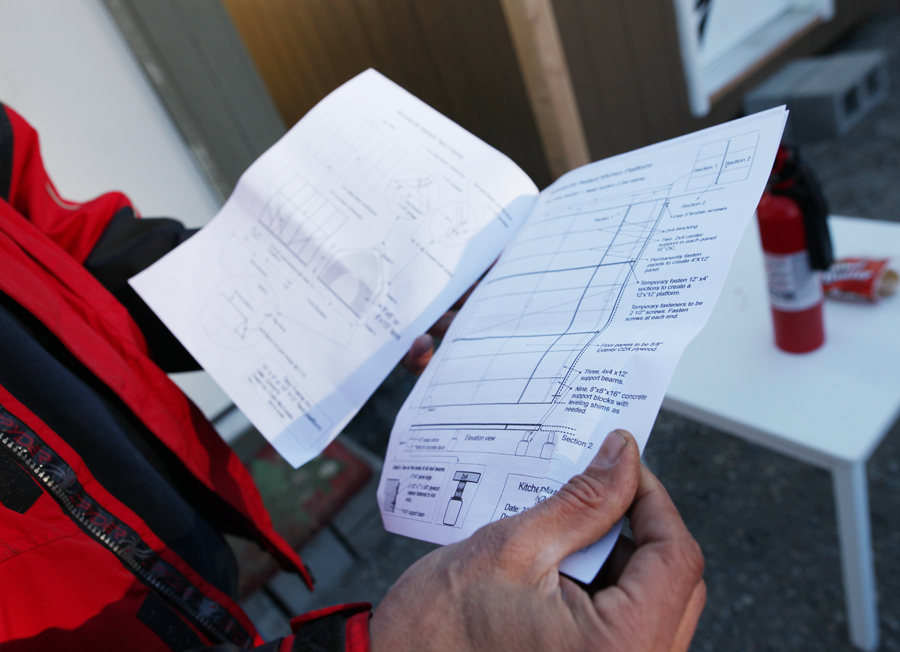 Steve showed me the plans they had drawn up for movable foundations they're building. These will keep tents up off the ground and will also secure tarps to protect tents from wind and rain. Kelly O 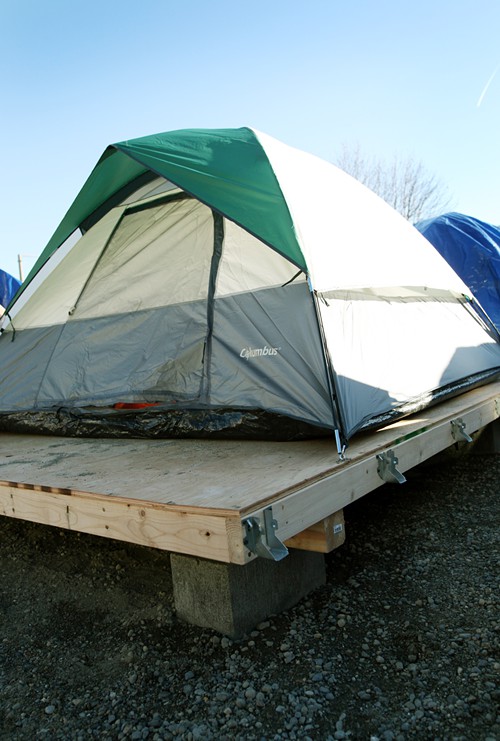 Here's a finished foundation. The metal brackets will eventually secure a protective covering over the tent. Kelly O 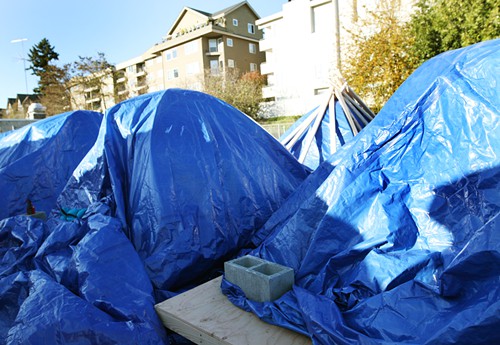 Luckily, since the move on Saturday, November 22nd, "there hadn't been too much rain," said Steve. "Still cold though. Once you get in bed and it's all nice and warm, you don't want to get out of it for nothin'!" Kelly O 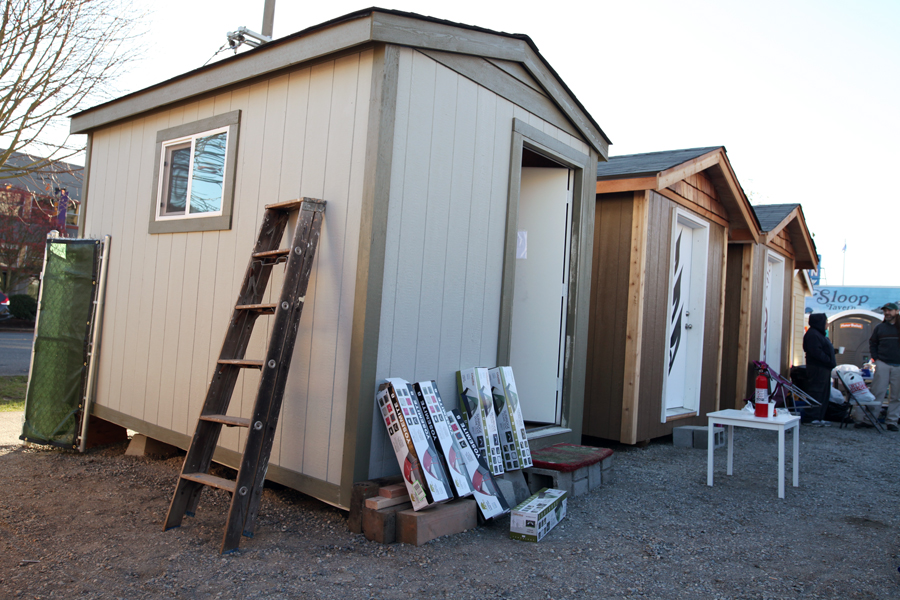 On last Wednesday, there were four Tiny Houses on the site. Kelly O 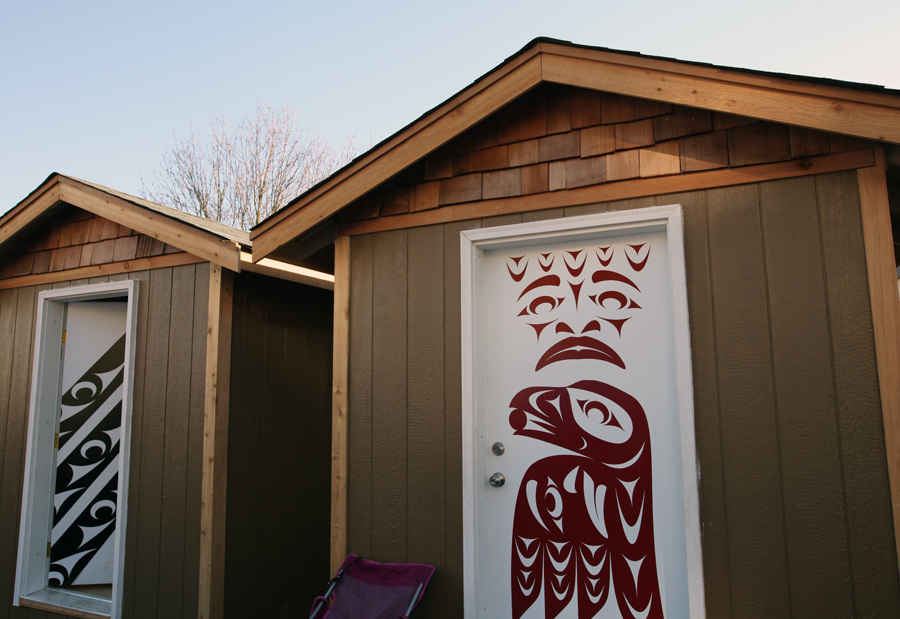 These structures are small, but very nice and cleanly constructed. Kelly O 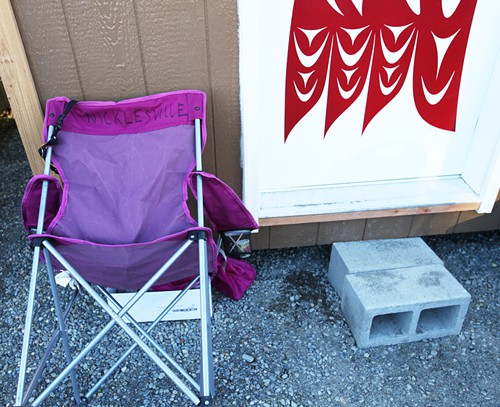 Steve told me, as of that day, there were only 17 residents in the new Nickelsville. Kelly O 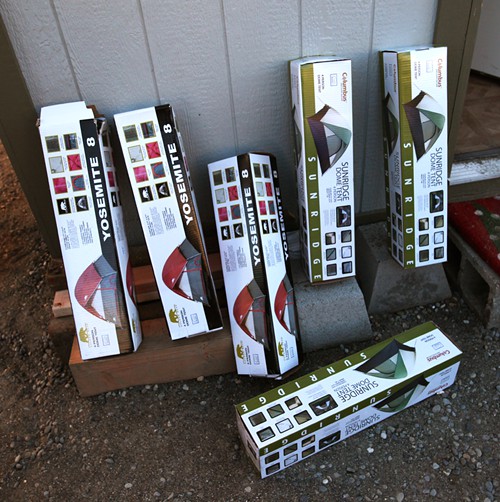 Other than the four Tiny Houses, most will live in tents. These were donations. Kelly O 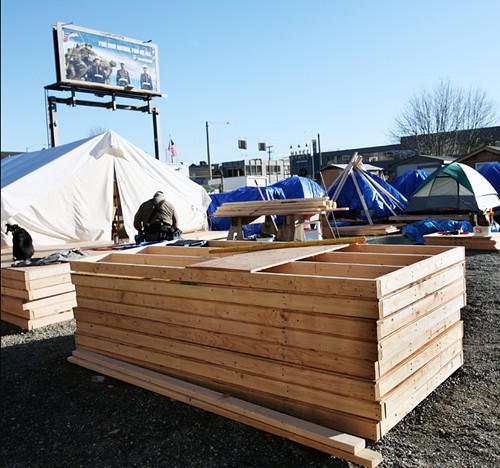 This is Gracie the dog, left, and Colin, right who is the engineer of the tent foundations. Kelly O 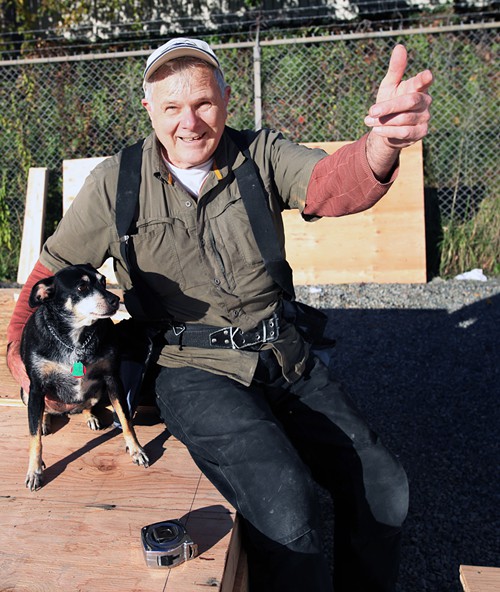 Colin tells me he's a volunteer builder and a former resident of another Nickelsville. "I was homeless for a while, but now I am not," he said. "I think there's a misconception that people who are homeless, will stay homeless forever. That's just not true of everybody." Kelly O 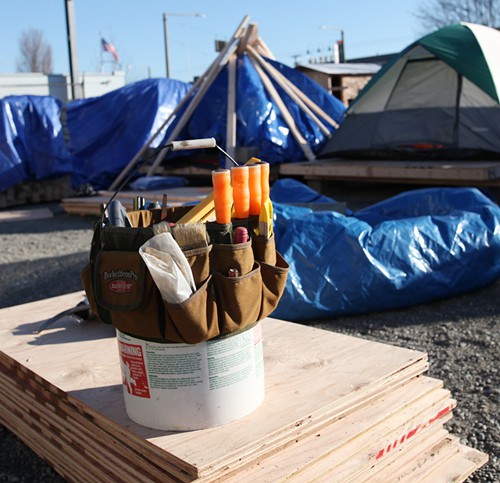 Colin chatted for a while, then seemed eager to keep building before another sun set. That day they were working on a getting the mess hall and pantry tents secured. Kelly O 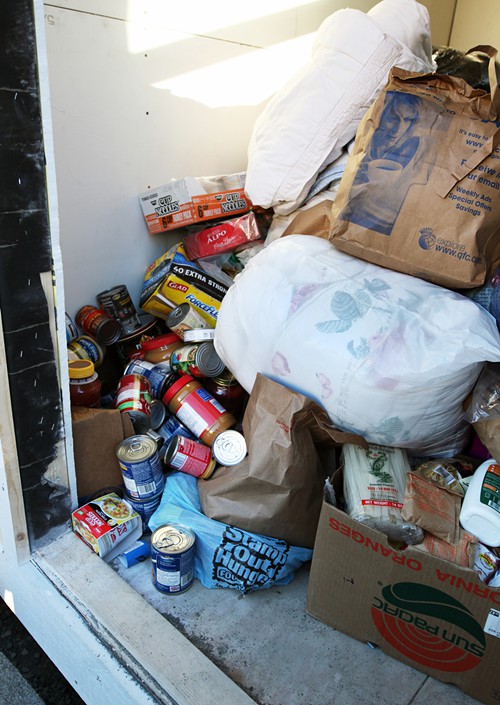 This was the temporary pantry, in one of the Tiny Houses. "Donations so far have been wonderful," said Steve. Kelly O 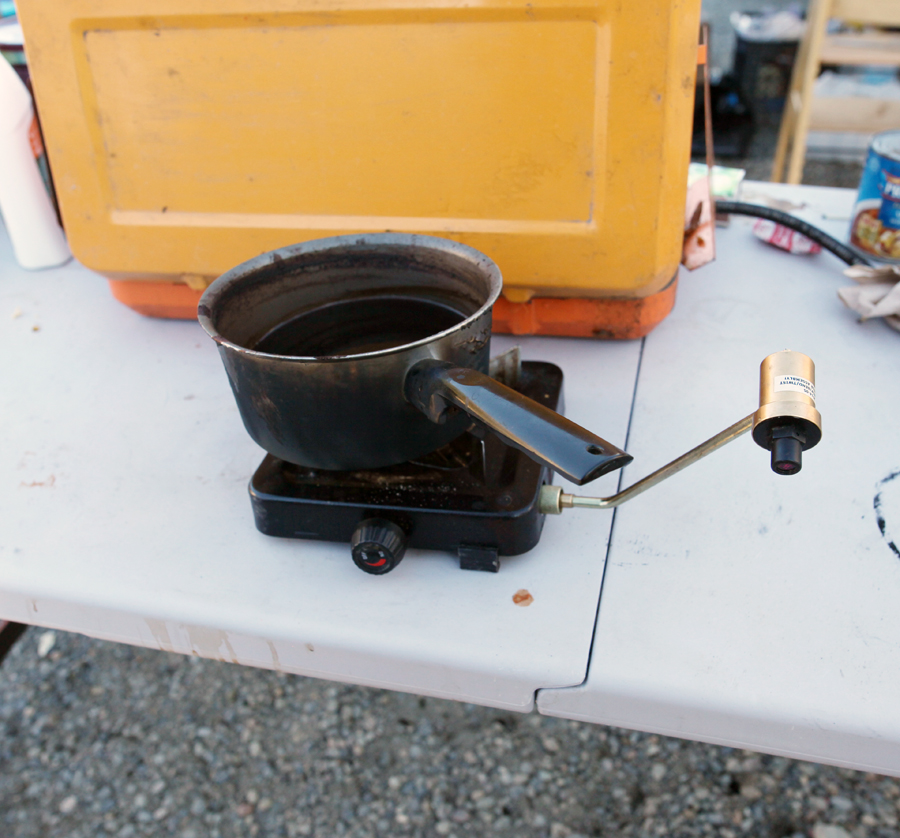 This was one of the temporary cookstoves. "Mainly for coffee and hot water. Gotta have those in the morning when we can." Kelly O 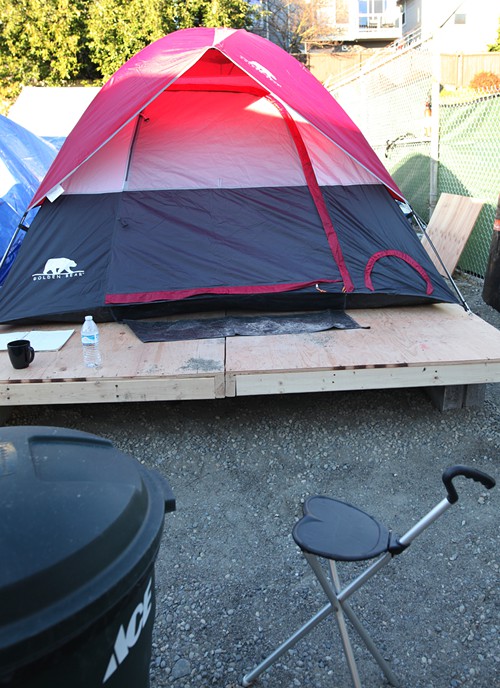 Another resident, Michael (who didn't want his photo taken because he 'needed a shave'), told me they've been strict with chores and taking the garbage out. He, a former Grateful Deadhead, said this Nickelsville was an "elephant graveyard." He also told me "no tweekers were allowed." Kelly O 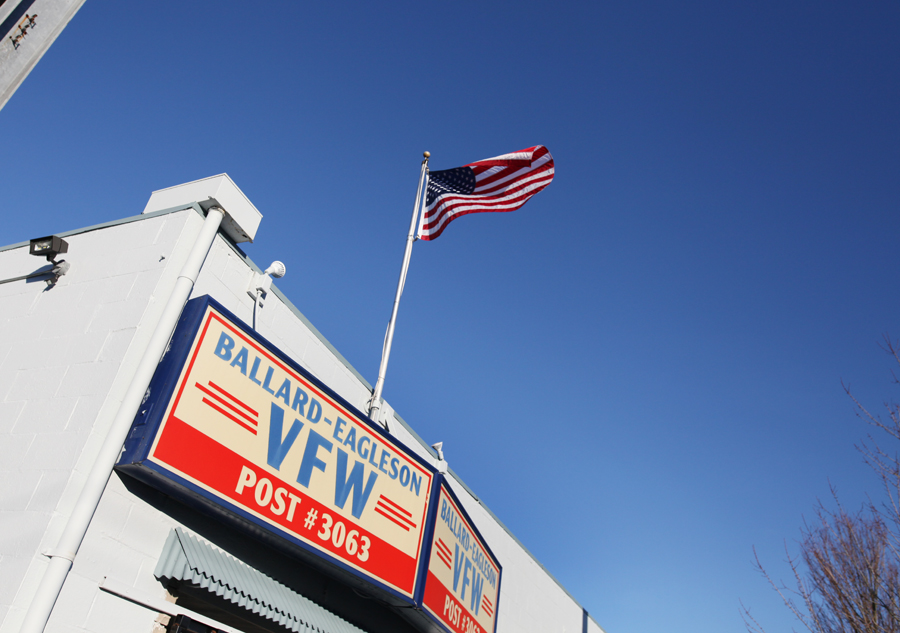 Michael also told me they were doing everything possible not to disturb their new Ballard neighbors, especially the VFW Hall, just next door. Kelly O 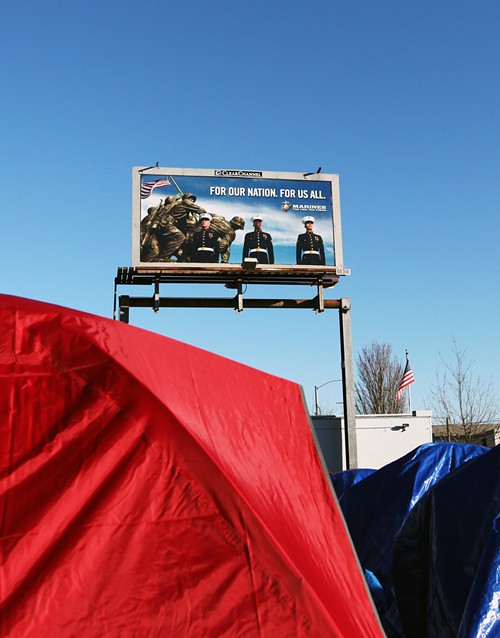 The billboard above the VFW Hall looms over Nickelsville too. It's an ad for the United States Marine Corps and says, "FOR OUR NATION. FOR US ALL." Kelly O

If you are interested in volunteering, donating money, food, or other needed items today, on #GivingTuesday, please go directly to Nickelsville.works. Read more about Tiny House Construction here.