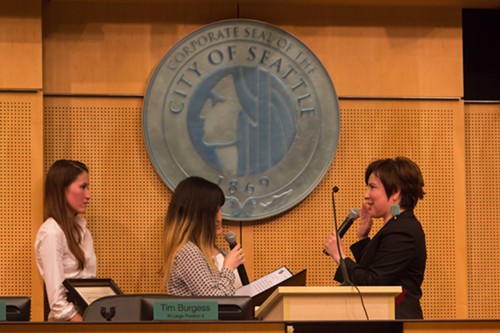 Among the new city council members sworn in today: Debora Juarez, the first enrolled member of a Native American tribe to ever serve on the Seattle City Council. City of Seattle

Today, a new city council was sworn in at Seattle City Hall. Does that sound boring? It kind of was. But, you know what's not boring? Thinking about all the stuff this new city council could do over the next few years.

This was the old Seattle City Council:

This is the new Seattle City Council:

The new body is, on the whole, younger, more diverse, and more progressive. While it's true that not all of the lefty/populist/Stranger Election Control Board picks won election, there's no denying that an unapologetic urbanist like Rob Johnson is more progressive than Jean Godden or that Lisa Herbold's focus on tenants' and workers' rights is a shift from whatever Tom Rasmussen was doing.

Plus, seven of the nine council members have now been elected by districts instead of citywide, meaning they'll have to answer to neighborhood concerns about potholes and street lights while also dealing with citywide issues like housing affordability and the homelessness crisis.

This council includes five women (a majority) and the body's first-ever Latinas (Lorena González and Debora Juarez) and the first enrolled member of a Native American tribe (Juarez). This is a brand new city council.

Today, in front of a council chambers packed with supporters and family members, each of the nine took their oaths of office and gave a brief speech. The council also elected Bruce Harrell as its new council president. Harrell, who represents District 2, the city's only majority-minority district, will be the first-ever Japanese American/African American council president in Seattle and the first African American president since the late '80s, according to council staff.

As a politician, Harrell is savvy and charismatic. He can also be totally unpredictable right up until the very moment a big piece of legislation is being voted on. This could go very well or very poorly.

Harrell and his colleagues also approved committee assignments, which I explained last month. Among the highlights: Former Council President Tim Burgess will chair the housing affordability committee and González will chair the committee that oversees public safety.

At today's ceremony, most members were sworn in by their family members with a couple notable exceptions:

Mike O'Brien was sworn in by a formerly homeless woman named Courtney Burnett Lauer, who lived with her family in a park, then in Nickelsville, and is now living in transitional housing. O'Brien said Burnett Lauer is racing to find permanent housing before her Section 8 voucher expires in February. He pledged to work on funding more affordable housing and homeless shelters, then he turned the mic over to Burnett Lauer. "We're only one family in a bunch of families that can barely survive," she said, "so I'm hoping it gets better for everyone."

Kshama Sawant was sworn in by Sahro Farah and Osman Osman, two tenants of landlord Carl Haglund. Last year, Haglund raised rents on tenants at a building in southeast Seattle despite problems in the building like mold and rats. In response, Sawant staged a press conference and protest targeted at Haglund, he then backed off the rent increases, and she proposed a bill to outlaw rent increases at buildings with housing code violations. (That bill has yet to be considered by the full council.) Sawant's post-swearing-in speech was a rallying cry for socialism nationwide—"Young people and workers are rejecting corporate politics and capitalism," Sawant said—and in Seattle.

"2016 should be year we take on the greed of the few to meet the needs of the many," Sawant said, calling for 12 weeks paid parental leave, strengthened tenants' rights, and a millionaires tax.

Lisa Herbold, who represents West Seattle and was sworn in by her former boss and outgoing council member Nick Licata, used her speech to call for impact fees, renter protections, and "responsible, responsive, accountable policing."

Rob Johson, a transit and planning nerd who represents northeast Seattle and took his oath surrounded by his three young daughters, called on the council to "commit ourselves as leaders of this city to planning for 2065" and working toward carbon neutrality.

Sally Bagshaw, who went from her previous citywide seat to representing downtown, Belltown, and Magnolia, pledged to give that part of the city a "strong voice" at the council and to focus her energy on homelessness and social services. In a bit of a passive aggressive jab at Sawant, she also said she was pursuing a plan to offer workers 16 weeks of paid family leave. (It's unclear if she meant city employees or private sector workers.)

Tim Burgess, the "godfather" of universal pre-k, ended a boiler-plate speech with a haiku because why not: "Always serve humbly / do things that really matter / focus most on the kids."

"Today is historic," she said. "It's not historic because I'm Native American or Latina. It's because I am America."

Lorena González offered a slimmed down version of the excellent speech she gave back in November, when she was sworn in early to replace another temporary council member. She said that 2015 was a "year of change" and 2016 would be a "year of action."

"Equity, civil rights, justice, and fairness," Harrell promised the crowd, will make up the "collective political DNA" of this new council.