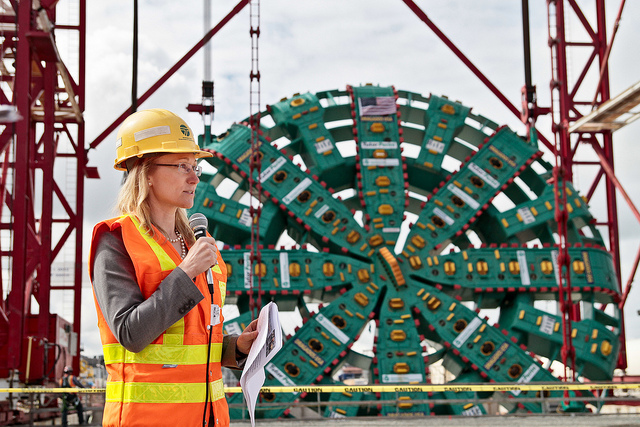 Lynn Peterson has been the head of the Washington State Department of Transportation since 2013. WSDOT

The Republican-controlled state senate used their majority to deny a confirmation of Washington State Department of Transportation Secretary Lynn Peterson this afternoon. Peterson, a highway engineer by training who previously served as transportation policy advisor to Oregon's former governor John Kitzhaber, was appointed to the position by Governor Jay Inslee in 2013.

Hill said it was “nothing personal” but the senate needed to use its “blunt instrument” (its confirmation powers) to “impose accountability” on an agency that was responsible for imposing high tolls on I-405. “I have no confidence that this agency is in any position to fix the problems it has,” he said about an agency he accused of failing to properly execute the tolling program.

Aside from the senate Republicans, Republican gubernatorial candidate Bill Bryant—formerly a member of the Seattle Port Commission—has had it out for Peterson for quite some time. Last year, during a luncheon with the Evergreen Republican Women's Club, Bryant told attendees that if elected governor, he'd fire Peterson, too. Bryant also dismissively referred to Peterson's experience in Oregon, which included serving as a strategic planning manager for Portland's mass transit system, as "in charge of bike paths and things." (Bryant, notably, used the same luncheon opportunity to defend the Port of Seattle hosting Arctic drilling rigs, a multibillion dollar mission that was later halted indefinitely by Shell Oil.)

Here's Bryant's full quote, which you can listen to here:

"I would appoint a new director. Lynn is probably a very nice person, but she literally was in charge of bike paths and things in Oregon and now she's overseeing billions of dollars in programs."

Senate Democrats gave emotional testimonies during Peterson's abrupt firing, Publicola reports. Under Peterson's leadership, they noted, the state helped craft and pass a $15 billion transportation package. "I want to thank you for the job you have done over the past two and a half years and I can’t say thank you enough," Sen. Reuven Carlyle (D-Seattle) told Peterson.

Governor Inslee also issued a statement in which he called the Republicans' move "shameful."

"Today’s vote by Senate Republicans is a blatant misuse of the confirmation process for political purposes," Inslee said in the statement. "Republicans' actions today do nothing to engender confidence about their ability to focus on the important priorities facing legislators this session."