Food and Identity in Beyoncé's "Formation" 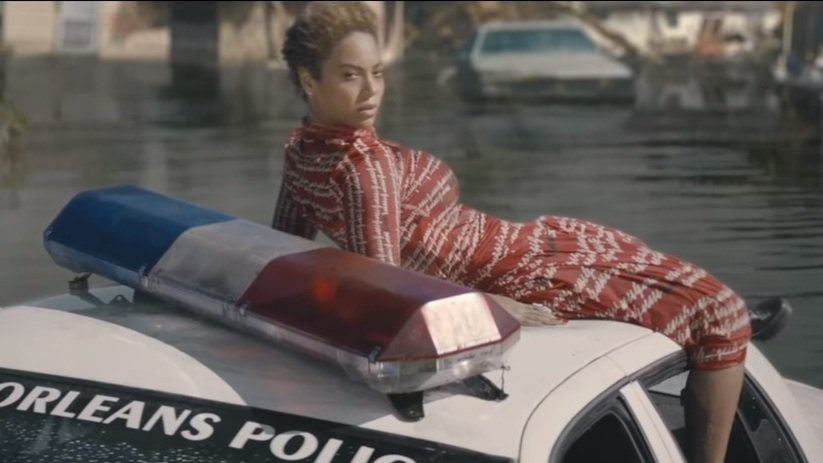 "I got hot sauce in my bag."
Sponsored

Three veterinarian-recommended tips to help your pets
overcome situational anxiety and other stressors this holiday season.

There's a lot I could say about "Formation," the new Beyoncé song and video that she dropped on Saturday, just before her performance at last night's Super Bowl. For now I'm going to leave most of that to scholars and critics at New South Negress, Red Clay Scholar, and the New York Times.

One thing I will say is that last night Beyoncé very deliberately took the Super Bowl—arguably the country's largest orgiastic celebration of commercialism and masculinity—and literally stomped all over it with an all-female army of revolutionary Black Panthers. Just in case you missed that part.

What I want to talk about here is how Beyoncé uses food to convey who she is. As someone who thinks about food all of the time, I love it when anyone, especially someone outside of the food world, talks food or drops a good food metaphor. In "Formation," a powerful declaration and celebration of blackness and identity, Beyoncé masterfully deploys foods as crucial elements of being a relatable Southern woman (who slays).

Yes, Beyoncé is a rich celebrity who vacations on yachts and wears Givenchy dresses and Gucci-style gear while dancing in an empty swimming pool, but she's also the daughter of black folks from Alabama and Louisiana who was raised in Houston's Third Ward. She hasn't forgotten—and she wants to make sure you don't either.

"Earned all this money but they never take the country out me / I got hot sauce in my bag," she sings, joining the ranks of all the regular people out there who, fed up with bland food (no matter fancy it is), are prepared to get things spicy on their own. (Beyoncé may stomp on consumerism, but she also understands and manipulates it perfectly. Hot Sauce tote bag, anyone?)

And what does a grown woman like Beyoncé, who earns more money than her husband, Jay-Z, do to reward him for satisfying and treating her right? Of course she might take him to upscale restaurants like New York City's the Spotted Pig or Pizzeria Mozza in Los Angeles (where the couple have been known to dine), but in "Formation" she keeps it real: "When he fuck me good I take his ass to Red Lobster."

In Beyoncé's world of Formation, food is a signifier that gets her message across more efficiently and more effectively than anything—or anyone—else. (I can't help but think of Jennifer Lopez's song "Jenny From the Block," in which Lopez spends close to four minutes and hundreds of words unconvincingly telling us that despite all "the rocks that I got...no matter where I go, I know where I came from.")

As I watched Beyoncé slay her halftime performance (oh, were there other artists performing? I can't recall), I couldn't help but think of another black Southerner in prime form who was also there at the Super Bowl: Carolina Panthers quarterback and 2015 NFL MVP Cam Newton. When he came into the league in 2011, Newton, who was born and raised in Atlanta, Georgia, likened the years it would take him and his team to develop to the long, slow cooking required to make good collard greens. Five years later, in the weeks before his first Super Bowl appearance, Newton revisited his metaphor.

“It was a process," he said. "It wasn’t going to be… instant grits, quick grits. It’s going to be a process like long-cooked collard greens. I think those collard greens are brewing right now, you can smell them from a mile away.”

Whatever you think of the unapologetically black Cam Newton (please, don't tell me—I don't care), it's clear that the man knows exactly who he is. And fundamental to that knowledge is an understanding, expressed through food, that greatness requires time and patience. Newton and the Panthers lost last night, but no one doubts that they'll be back in the Super Bowl shortly.

I'm embarrassed to breathe the same air as the Seattle Seahawks fans who created and signed a petition to ban Cam Newton from CenturyLink Field, but I wouldn't be surprised if I was standing next to some of them on May 18, when Beyoncé comes to Seattle to play the Seahawks' home stadium.

"I dream it, I work hard / I grind 'til I own it," we'll sing, an idea Cam Newton surely understands. "I twirl on them haters."

My Philosophy: A Column About Hiphop and Culture