RentBoy on February 12, 2016 at 9:03 AM · Report this
2
They've unleashed the dogs, and old John Lewis (over the previous decade referred to as a perpetual liar) springs for on HRC's behalf to lie about Bernie, claiming that Bernie is lying and claiming that Lewis never even met Bernie or his wife?

Of course, the truth is highly fungible where Lewis is concerned:

Death of a King, by Tavis Smiley

sgt_doom on February 12, 2016 at 9:25 AM · Report this
3
@2 Lewis didn't say Sanders was lying but he implied it. Thank you for these articles that set the record straight. I doubt the rebuttal to Lewis' smear will make it to the front page of corporate media.
anon1256 on February 12, 2016 at 10:05 AM · Report this
4
If Bernie is a single issue candidate, then it's the most important issue there is. Income disparity and erosion of the middle class.

Henry: Ahem . . . . I enthusiastically complemented Secretary Clinton's performance as secretary of state because she so cunningly revoked Edward Snowden's passport while he was in the Moscow Airport, thereby trapping him in Russia, where we could blame everything on him and the Russkies!

I endorsed HRC because she helped in the overthrow of the democratically elected president of Honduras, Manuel Zelaya, giving their cocaine-trafficking oligarch free rein, resulting in rampant criminality which would cause hordes of young Hondurans to flee and cross the southern border of the USA, where they would be incarcerated in detention camps run by one of Secretary Clinton's major donors, the Geo Group!

I endorsed HRC because she helped in the overthrow of the democratically elected president in the Ukraine, spending $5 billion in the process (OK, she is rather spendy). Think of all those innocents who have perished in both Honduras and the Ukraine --- it gives me a wonderful case of the nostalgic shivers, and brings back fond memories of Gen. Pinochet of Chile torturing to death thousands!

And I even watched the debate last night between her and that commie pinko, Sen. Sanders, and she made a great point about where the money would come from for Sanders' proposals --- after all, her husband helped the banksters steal so much of it, and they certainly aren't going to cough it up!

Ach der lieber! I love that neocon of a woman.

And for everyone's viewing enjoyment:

6
@4: That's kind of what I was thinking. If anyone is a one issue candidate, I should hope that issue is the biggest threat to the continuing existence of the United States as we know it.

It is not sexy or easy to fix, but economic disparity will destroy this country faster than any other threat, foreign or domestic.
Theodore Gorath on February 12, 2016 at 10:35 AM · Report this
7
" A Tacoma police officer fatally shot Puyallup tribal member Jacqueline Salyers just before midnight on January 28...
Read more at http://indiancountrytodaymedianetwork.co… 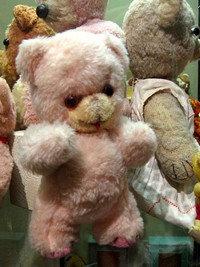 9
@8: you can't expect Seattle news outlets to know the names of things in those unimportant, non-King County type places, or, apparently, to spend 20 seconds on the internet to fact-check. Given the route, it's got to be Grays Harbor Transit bus #40 - http://www.ghtransit.com/Bus-Schedules-M…
Gertie on February 12, 2016 at 1:23 PM · Report this