Trans rights activists stood on the steps of the Washington State Supreme Court to celebrate the failure of an anti-trans bill in the state Senate. Alex Garland

The two rallies this morning couldn't have been more than 200 feet apart. On the steps of the Washington State Legislative building stood a group of roughly 150 waving signs calling for the exclusion of transgender people from sex-segregated bathrooms. Across a parking lot, a similarly sized group rallying against transmisogyny on the Washington State Supreme Court steps. They held signs that read, "Trans rights are human rights" and "#peeforpeace."

Last week, trans rights activists won a significant battle with a Republican-dominated state Senate when legislators narrowly killed a bill that sought to overturn the state Human Rights Commission's decision on bathroom use. Last month, the Commission clarified that the state's anti-discrimination laws protect the rights of transgender people to use the bathrooms and locker rooms consistent with their gender identity.

On the trans rights activists' side, Rep. Brady Walkinshaw (D-Seattle)—who happens to be running for Jim McDermott's available congressional seat—highlighted the importance of a Democratic majority in the house. While two bills that aim to limit trans rights received hearings in the Republican-led state Senate, four bills with similar intentions were shut down in the house.

Walkinshaw also made a call for increased LGBTQ representation in politics. "Thirty years ago, 1987, Cal Anderson was the first openly gay member of this body," Walkinshaw said. "And so much has changed over the last 30 years, but what we haven't seen in this state is someone who is openly trans join us in this body... Identity matters, representation matters, and we won this fight."

Meanwhile, speaking to a crowd of people holding signs like "Protect Privacy" and "Anatomy Matters," Rep. Matt Manweller (R-Ellensburg), scoffed at the idea of transgender rights as a civil rights issue. 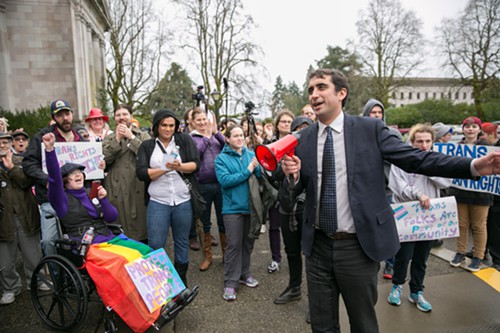 "As somebody who teaches the Bill of Rights, and who has made the defense of civil rights and civil liberties the single most important aspect of my career, it is absolutely abusive to take this issue and make it a quote 'civil rights issue,'" Manweller said. "It is demeaning to all the people who have fought real civil rights issues in the past."

Manweller teaches political science and constitutional law at Central Washington University, but it's unclear how much of his lessons are devoted to the civil rights struggles of the 20th century. If Manweller did include those battles in his teaching, perhaps he'd be familiar with some of the arguments used to justify Jim Crow laws and racial segregation, including racial segregation of toilets. The rhetoric supporting segregation back then, it so happens, is similar to the rhetoric used to keep sexes separate in toilets—and, by extension, Manweller's rhetoric used to keep transgender people out of them. 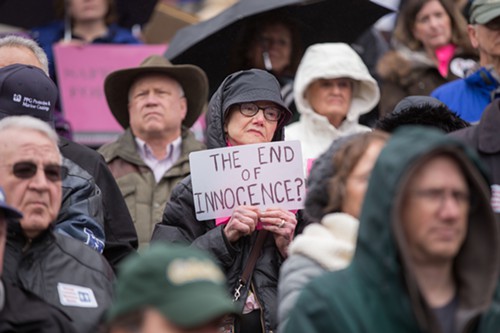 Sponsors of the anti-trans bills in the state legislature argue that keeping trans people out of bathrooms will protect children. (Here's why that's ridiculous.) Alex Garland

Perhaps some of the people in Manweller's crowd could have benefited from a conversation with the trans people on the other side. But according to photographer Alex Garland, the two groups kept their distance. Garland didn't witness individuals from either side interact.

Now that SB 6443, the anti-trans bill, failed, some legislators have threatened to put the issue limiting transgender rights to vote in a statewide ballot initiative. Speakers on the pro-trans rights side of the parking lot warned the crowd to stay vigilant.

Rep. Laurie Jinkins (D-Tacoma), the chair of the house Judiciary Committee who vowed to block any anti-trans bills on the house floor, celebrated with the trans rights activists, but she also made a plea.

Photographer Alex Garland reported that the two groups did not interact with one another. Alex Garland

"One of the things I ask you to do as we are moving forward about educating the public about trans people, about trans rights, more about LGBTQ issues in our state, do it with passion and compassion," Jinkins said. "That is the way we have educated everyone in the state of Washington, that their family members, their neighbors, their friends, and their coworkers deserve the same kind of protections and respect that everyone else in this state has."