Guest Editorial: We Need to Become a State Where Everyone Pays Their Fair Share

On so many fronts, Washington leads the nation. Long before Obamacare, we worked hard at expanding health care access to low-income children and the working poor. We were one of the first states to embrace marriage equality. Our state is known worldwide as a center of innovation in areas such as aerospace, software, and global health.

Unfortunately, we are also No. 1 in another area.

Our tax system is the most unfair in the nation. According to a report released this month by the Institute on Taxation & Economic Policy, Washington residents with the lowest incomes—less than $21,000—pay 16.8 percent of their incomes in taxes. Meanwhile those with the highest incomes—more than $507,000—pay 2.4 percent in taxes.

In other words, our poorest residents pay seven times as much of their income in taxes as do the very wealthiest.

What does this say about us as a state? How can we justify asking those with the fewest resources to pay such a disproportionately bigger share of their income in taxes, especially when income inequality has risen to its worst levels in more than 70 years?

Besides the shameful distinction of being the most unfair, our antiquated, patchwork tax system no longer keeps pace with the growth of our economy or with growing demands for services.

We must act this year so we can build the education, mental health, and child protection systems that our citizens expect and our courts demand.

Why does that matter? If Washington tax collections were merely at the national average, we would be generating nearly $2.6 billion more per year in state and local revenue.

Washington’s tax system—the bulk of which was put in place in 1935—was designed to function in an economy far different from the one we have today.

For example, we rely on the sales tax for the largest portion of our revenue. That worked well when we had a goods-based economy. But during the past half century, there has been a dramatic shift in consumer spending to services, which are not taxed to the extent that we tax goods.

There are other factors hobbling our tax system:

• Consumers are doing more of their shopping online. Since many out-of-state businesses don’t collect sales tax, Washington loses hundreds of millions of dollars each year in potential revenue.

• Over the past century, the state has enacted more than 600 tax breaks worth billions of dollars. Many of these energize our economy and provide good jobs. The problem we face is the Legislature has been unable to close outdated or ineffective tax breaks. In 2013, I proposed closing more than $560 million worth of those loopholes but the state senate wouldn't act.

As I worked for the past several months on my proposal for Washington’s next two-year budget, it became evident to me that we would need more revenue. Our economy and state tax collections are rebounding, but at a much slower pace than after previous recessions. And we have growing needs and obligations that far exceed the latest revenue projections.

The state is under court order to live up to its constitutional obligation to adequately fund basic education. The courts have also made it clear that, in addressing budget shortfalls over the past six years, the state sometimes went too far in cutting services, such as for at-risk children and people with mental illness.

Meanwhile, prior budgets required millions of Washingtonians to make sacrifices. Students and their families are paying thousands of dollars more in public college tuition. State funding for State Parks was shrunk so far we now must pay fees to visit them. And state employees, who are paying more for their health care and pensions, have not seen a general wage increase since 2008. 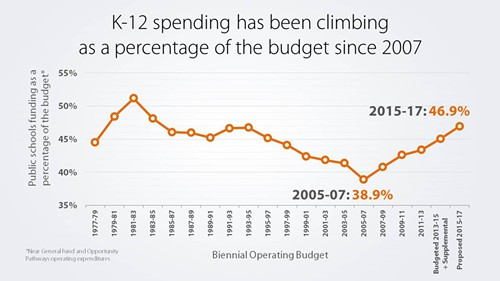 The budget I proposed last month calls for about $1.4 billion in new revenue. My budget uses these new revenues to make the largest-ever state investment in early learning, funds statewide all-day kindergarten, reduces class sizes in K-3, and freezes college tuition, among other important investments.

Before proposing new revenue, we scrubbed the budget for savings, finding about $400 million in cuts and savings. We also propose spending some state reserves.

But more is needed.

Under my plan, the largest portion of new revenue—nearly $800 million—would come from a new capital gains tax on the sale of stocks, bonds and other assets. The state would apply a seven percent tax to capital gains earnings above $25,000 for individuals and $50,000 for couples. Gains from retirement accounts, most home sales, farms, and forestry would be exempted. Overall, in any given year, the state Department of Revenue estimates less than one percent of the state’s taxpayers would be affected.

I am also going to try again to close tax breaks and have proposed repeal of several worth about $282 million during the next biennium. My budget also relies on about $380 million in new revenue that would be produced by my proposed market-based carbon pollution reduction plan, which puts a firm cap on carbon emissions and assesses charges on polluters responsible for those emissions.

As part of my Carbon Pollution Accountability Act, the state would make a number of investments to help disadvantaged communities across the state. For example, we would finally be able to launch the Working Families Tax Rebate, a program the Legislature adopted six years ago but never funded. The program would provide tax rebates of up to $500 to more than 450,000 people.

Will my budget fix all the problems with Washington’s broken tax system? Of course not. But as Andy Nicholas from the Washington State Budget and Policy Center recently told the Seattle Times, my revenue plan “is the first and really the most significant in recent memory to really attempt to do something that starts moving in that direction.”

We’re climbing out of the recession and we should quit the hollowing out of state government. With capital gains and a carbon charge we can we move toward a revenue system that meets our expectations for what Washington can be, and we can do that while doing more to become a state where everyone pays their fair share.

Jay Inslee is the governor of Washington State.