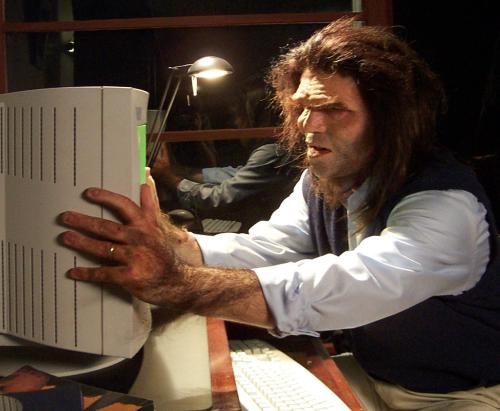 "Why, this 'Perez Hilton' genius is surely worthy of a Pulitzer!"

The full press release is after the jump. I've heard rumors that the committee might consider banking by ATM sometime in the near future.

New York, Dec. 8, 2008 – The Pulitzer Prizes in journalism, which honor the work of American newspapers appearing in print, have been expanded to include many text-based newspapers and news organizations that publish only on the Internet, the Pulitzer Prize Board announced today.

The Board also has decided to allow entries made up entirely of online content to be submitted in all 14 Pulitzer journalism categories.

While broadening the competition, the Board stressed that all entered material — whether online or in print — should come from United States newspapers or news organizations that publish at least weekly, that are "primarily dedicated to original news reporting and coverage of ongoing stories," and that "adhere to the highest journalistic principles.”

Consistent with its historic focus on daily and weekly newspapers, the Board will continue to exclude entries from printed magazines and broadcast media and their respective Web sites.

"This is an important step forward, reflecting our continued commitment to American newspapers as well as our willingness to adapt to the remarkable growth of online journalism," said Sig Gissler, administrator of the Prizes. "The new rules enlarge the Pulitzer tent and recognize more fully the role of the Web, while underscoring the enduring value of words and of serious reporting.”

The Board will continue to monitor the impact of the Internet, Gissler said.

Beginning in 2006, online content from newspaper Web sites was permitted in all Pulitzer journalism categories, but online-only newspapers were not allowed to submit entries, and entirely-online entries were permitted in only two categories, breaking news coverage and breaking-news photography.

In addition to text stories, the competition will continue to allow a full range of online content, such as interactive graphics and video, in nearly all categories. Two photography categories will continue to restrict entries to still images.

The Board adopted the changes at its November meeting at Columbia University after a lengthy study by a committee.

The Board also refined the definition for its prize on Local Reporting of Breaking News. To emphasize immediacy, the new definition states that "special emphasis" will be given to "the speed and accuracy of the initial coverage."

The Board, Gissler said, hopes that this will encourage the submission of more online material in the category.

Comments 2
Tags: Books Blogs Media
The Stranger depends on your continuing support to provide articles like this one. In return, we pledge our ongoing commitment to truthful, progressive journalism and serving our community. So if you’re able, please consider a small recurring contribution. Thank you—you are appreciated!
CONTRIBUTE NOW