A couple days ago, we received a copy of Firmin, a novel by Sam Savage in the mail. I read Firmin a few years back, and I liked it okay. It's about a rat who lives in a bookstores in Boston's Scollay Square district. The rat learns how to read.

It's a charming enough fable, and the writing about the seedy neighborhood known as Scollay Square, which was notoriously torn down to make room for Boston's hideous Government Center complex, is beautiful. But the marketers and designers of this book fucked up in a huge way. Here's the book: 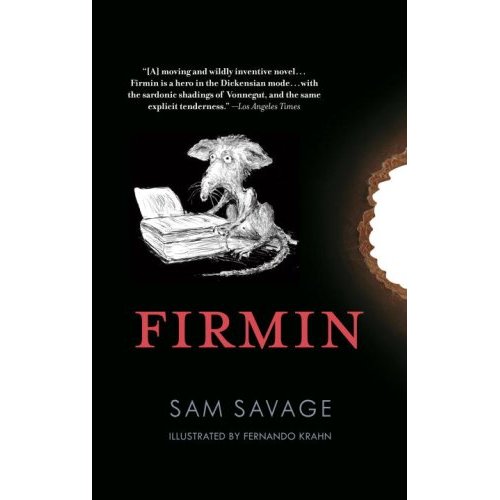 That's not just part of the illustration: They have die-cut the book to make it look and feel as though a giant rat has nibbled on the side of the book. This is annoying enough, but the rat-hole is exactly where one's thumbs go when you're holding the book, meaning that if you try to hold it the traditional way, your thumbs wind up covering up text of the book when you're trying to read it. This is one of the dumbest book designs I've ever seen. Dear publishers: Next time, if you must die-cut a book for the sake of a little bit of browsing attention, at least cut the hole out of the top of the book, where it's less likely to annoy readers.

Luckily, the original edition of Firmin is available, in hardcover and hopefully without any rat bites, at many used bookstores around town.

Comments 8
Tags: Books Blogs
The Stranger depends on your continuing support to provide articles like this one. In return, we pledge our ongoing commitment to truthful, progressive journalism and serving our community. So if you’re able, please consider a small recurring contribution. Thank you—you are appreciated!
CONTRIBUTE NOW