Last week on the Seattle Poetry Chain, Ed Skoog shared a wonderful poem about a great deli. Among other positive comments, it evoked this particular one:

We'll see if we can continue the Andrew-Cole-pleasing streak to two weeks with the newest poet on the Seattle Poetry Chain, Eric McHenry. Here's why Mr. Skoog chose Mr. McHenry:

Eric McHenry, who lives quietly in Wedgwood, is well known for his highly-structured and yet colloquial rhyming poems, his nimble wit, his goodness, and his height. His first book The Potscrubber Lullabies, was published last year by the British/American press Waywiser, and won the Kate Tufts Award, which is a Big Deal. He also reviews poetry for the New York Times. He has written the only perfect American poem, "Rebuilding Year." 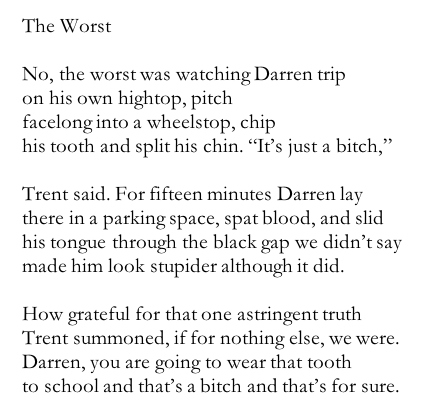 Thanks to Ed Skoog and many thanks to Eric McHenry for joining us today. Tune in next week to see who Eric McHenry has chosen as the next link in the Seattle Poetry Chain.

Comments 8
Tags: Books Blogs
The Stranger depends on your continuing support to provide articles like this one. In return, we pledge our ongoing commitment to truthful, progressive journalism and serving our community. So if you’re able, please consider a small recurring contribution. Thank you—you are appreciated!
CONTRIBUTE NOW