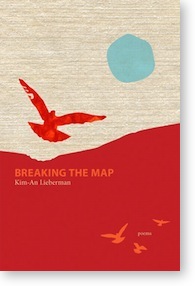 I've loved Lieberman's poetry for a long time now, and I've seen her read once and found her charming and funny and intelligent; just like her poetry. Let's see what Culhane has to say about her:

Kim-An Lieberman has a new book out: Breaking the Map. She's a poet with a particular interest in Vietnam, though that's like saying Elizabeth Bishop had a particular interest in Brazil: it's accurate enough to say but misses the wondrous quality of the connection. Kim-An's work touches on the mythic and magical, often meshing the extraordinary with the quotidian: how to name one's child; how to listen to a song for the second time; or what to do on a school choir trip to Juneau. She has depth and originality and a lovely lyrical ear.

If you'd like to learn more about Kim-An Lieberman, her website is here. The poem that Lieberman would like to share with us will appear in the upcoming 13th volume of the Jack Straw Writers Anthology, and she'll be reading with Jack Straw on May 21st. Without further ado, here is Kim-An Lieberman's poem for the Seattle Poetry Chain.

Here’s the headline: Marmaduke runs amok.
In Monday’s puddle, a quartered comics section
goes to pulp under dog-paw after sloppy dog-paw,
the great oaf and all his off-leash pals gamboling
down the block, anointing the world with slobber.
Heathcliff wonders if the milkman will ever return.
B.C. and Dagwood toast to syndicated oblivion.
Local and World lie entwined in the rain-gutter,
momentary scandals expired.

Delivery boys abandon their drizzly morning routes
as the blue globe spins its last late-breaking round.
Even a storm, we quip, can be weathered down,
and if the wreckage amounts to any actual loss
then it’s just a caption for someone else’s copy desk.
But watch for this: on wind-gust, one broadsheet
takes flight. The columns are a grid of leaded glass,
a city of towers, a thousand lives played in concert
against the graphite sky.

Any poem that works in Marmaduke is more than all right with me! Many thanks to Brian Culhane for his great choice, and thanks to Kim-An Lieberman for participating. Tune in next week to see who she chooses as the next link in the Seattle Poetry Chain.

Comments 1
Tags: Books Blogs
The Stranger depends on your continuing support to provide articles like this one. In return, we pledge our ongoing commitment to truthful, progressive journalism and serving our community. So if you’re able, please consider a small recurring contribution. Thank you—you are appreciated!
CONTRIBUTE NOW