Down and Out in the Magic Kingdom eBook Club, Day One 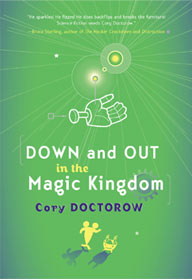 Down and Out in the Magic Kingdom begins with a couple of notes about copyright, giving the reader full license "to noncommercially "remix" this book — you have my blessing to make your own translations, radio and film adaptations, sequels, fan fiction, missing chapters, machine remixes, you name it."

The obvious impulse for a reader is to skim or skip over this bit entirely, but I think that's a misleading impulse. If what you're looking for is the beginning of a narrative, you'll scan the copyright bits impatiently, but it's important; it sets a tone for the rest of the book (and, since it's Doctorow's first book, it kind of sets the tone for the rest of his career). I think of it kind of like the "Custom-House" introduction to The Scarlet Letter. You want to rifle through the dry text at the beginning, but if you sit with it and read it, it'll bring a greater satisfaction to the rest of your reading experience. It places the author in context with the work.

In any case, the novel itself begins with a prologue in which our narrator meets Keep-a-Movin' Dan, a cowboy-type personality who intrigues him. The reader is dropped into the middle of a futuristic world (and a civilization called the Bitchun Society) where death is an outmoded notion, and people sometimes go to sleep for thousands of years in the hopes that things in the future won't be so goddamned boring.

The narrator, Julius ("Jules"), lives in Disney World and is dating Lil, a woman "15 percent of my age." In a few pages, we're introduced to life in the future and the concept of Whuffie. Whuffie is like money, if money stopped being about gold or credit and started being about, basically, popularity. When Jules first meets Keep-a-Movin' Dan, the latter's Whuffie is at astronomical levels due to his missionary work. When he next meets him, he's near zero. Dan moves in with Lil and Jules and tries to get back on his feet again.

So here's what I think: Doctorow does an admirable job introducing Whuffie, cochlear cel phones, and a few other bizarre sci-fi inventions to the reader. (Seven years after the publication of DaOitMK, I have to say that the idea of what is basically a monetary system that is based on social networking is brilliant.) There are plenty of mysteries, too; I'm a little vague on the Ad-hocracy and the Bitchun Society, but I'm sure that will be cleared up as we go along. It's too early to tell about the characters—we've only made it a fifth of the way, after all—but I do hope that Lil becomes more than a butt-wriggling love interest. The most interesting character—Dan—has already had an impressive rise and fall. I'm eagerly waiting to see what Doctorow does with Jules as he progresses; boring characters are hard to write, but it's even harder to write them as they stop becoming boring. The fact that Jules chose to stay awake on the plane while the other passengers go deadhead and are "stacked like cordwood" for the flight is promising.

So far, DaOitMK is a well-written sci-fi novel, though I'd be interested to see what a non-sci-fi reader thinks of it. My trepidations are low, and my expectations are high. I'll be back to discuss Chapter 3 and Chapter 4 tomorrow around 2.

Comments 13
Tags: Books Blogs
The Stranger depends on your continuing support to provide articles like this one. In return, we pledge our ongoing commitment to truthful, progressive journalism and serving our community. So if you’re able, please consider a small recurring contribution. Thank you—you are appreciated!
CONTRIBUTE NOW