1
You're going to love me for reviewing momus, btw.

3
I knew I should have gone last night. As it happens, my exact dream is to spend my late 30s and early 40s hobbling around as a backup Seahawks QB.
laterite on March 12, 2010 at 4:21 PM Report this 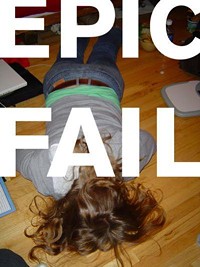 4
Asa, you better review that vampire/romance novel you took. You promised!
Megan Seling on March 12, 2010 at 4:26 PM Stranger Staff

So long as they're about curling, soccer, or rugby.

6
Still one more chapter to finish of that Green Guide for Business, by the way. Then I can get cracking on that Victorian detective novel set in Venice (Italy).
Will in Seattle on March 12, 2010 at 4:29 PM Report this

8
By the way, to tip the scales in favor of The Cuff, they have a totally new kitchen setup with some great food. They used to just have typical fried food like chicken strips, onion rings, fries and such, but on Thursday through Sunday, they have huge burgers, turkey sandwiches, nachos and much more.
Baconcat on March 12, 2010 at 4:55 PM Report this

9
And I'm kind of surprised that nobody took Never Give Up on Your Dream: My Journey by Warren Moon. What's wrong with you people? Why are you not interested in a "triumphant story of how Warren Moon overcame all obstacles to become one of the Top 5 quarterbacks of all time?"

It would be interesting to know what percentage of people actually end up in their dream job. While there's nothing wrong in people dreaming about, or striving for, something -- after all, as the saying goes, you can't win if you don't play -- not everyone is going to become an NFL quarterback, or a successful actor/writer/artist/entrepreneur/etc.

I used to argue with an ex-girlfriend, who was one of these "you-can-be-anyone-you-want-to-be" or "you-can-do-anything-you-want-to-do" types, that that was untrue. But then I realized she was right: anyone can, for example, be a writer. But just because you are a writer doesn't mean you're going to make a lot of money (or even a decent living) at it.
Roma on March 12, 2010 at 5:36 PM Report this

10
Damn it, I would have gone for that Ramparts collection too. I will probably end up buying it anyways ... I need to get to Slog Happy! And oh yeah, for human connection and, you know, that thing called fun.
Estey on March 12, 2010 at 6:50 PM Report this

11
Pity, you missed the book signing a on Dec 19th DT Seattle.

We also got him to sign a 1977 Rose Bowl program magazine, which he broke out a big grin upon signing.
Kinison on March 12, 2010 at 6:53 PM Report this
12
Megan, Asa left that book in my satchel! I tried to tell him I had only offered up the services of my satchel for the four-volume "elements" charity set, but he tricked me into holding his mass-market paperback vampire drama regardless. I can see it from here and it makes me feel dirty.
girlstyle on March 12, 2010 at 6:55 PM Report this

13
I grabbed Phoenix Noir, a bunch of short crime stories taking place in the vast desert wasteleand of my birth. I read one story so far and it was ok. I'll report back when I'm finished.
very bad homo on March 12, 2010 at 7:30 PM Report this