Did you go to Emerald City Comicon this past weekend? Stranger photographer Jackie Canchola did. For two days, geeks of all stripes flowed into the Washington State Convention Center to let their nerd flags fly without fear of wedgie retribution. The photo to the left (click to enlarge) is one minute before the opening of the second day. I hope they let Darth Vader in before everyone else, or somebody probably got hurt. Like most modern Marvel Comics, you can see Deadpool making a cameo appearance in the background there.

But it's important to note that not everybody dressed like bad guys. This fellow, for instance, did a bang-on Greatest American Hero:

There are many, many more huge, fancy photos of celebrities (Spock! Hulk!) people in costume, and body parts signed by Wil Wheaton after the jump.

Here is a viking about to pillage the 25¢ longboxes for all that they're worth:

I don't think this guy's bunny suit is at all comic-book related. In fact, I think he might wear it all the time:

Venture Brothers-related costumes have become enormous hits at conventions in the last few years. The Doctor Girlfriends are always, invariably, hot. It's time for the Great Pillbox Hat Fetish Revival:

Kiss the head. KISS IT!

I don't know who this guy is supposed to be—is that Ultimate Nick Fury in a fur coat?—but he's my new hero, and that second photo of him is my new wallpaper for every computer I own:

Probably due in part to the recent Tim Burton movie, there were quite a few Sexy Alices walking around ECCC this year: This Alice does not seem happy with her new Donnie Darko friend.

Maybe she would have been happier with this Ewok:

Because the Ewok seems to be a happy guy:

I didn't wait in line for any of the celebrities, but this guy was thrilled to meet Stan Lee and get his autograph: 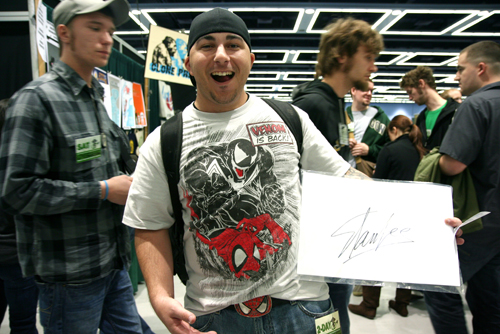 The line for Leonard Nimoy was ridiculously long and full of insanely hot women. I talked with a lady last night who thinks Spock is incredibly sexy. She wanted to hate Zachary Quinto in the new movie out of loyalty to the Original Spock, but she couldn't. She was adamant, though, to point out that Nimoy is still the sexiest motherfucker to ever put on pointy ears:

Lou Ferrigno didn't have a Spock-level line, but the TV Hulk is really holding up well, isn't he?

And yes, ladies, if you ever wondered, Wil Wheaton does sign breasts:

Comments 28
Tags: Books Blogs Nerd
The Stranger depends on your continuing support to provide articles like this one. In return, we pledge our ongoing commitment to truthful, progressive journalism and serving our community. So if you’re able, please consider a small recurring contribution. Thank you—you are appreciated!
CONTRIBUTE NOW