The Stranger's sweet-as-honey bookkeeper, Renee Krulich, went to both days of Emerald City Comicon, too. And she took photos! Like this photo, of Harley Quinn, who is the Joker's girlfriend. 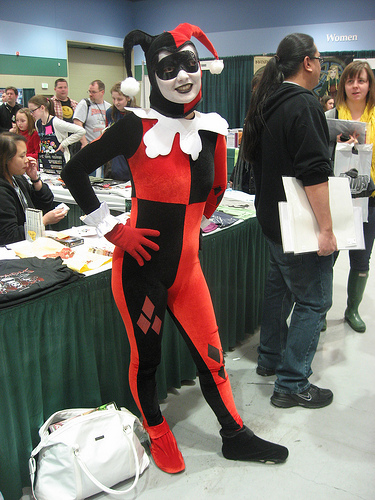 (An aside: I was pleased to see a woman who dressed as the Heath Ledger Joker this year; it was admirable of her to not want to go the tight-jester-costume route. She wanted to have a fucked-up face and wear baggy purple clothes, dammit, and that's what she did.) And here's Mojo Jojo:

More photos after the jump.

Here's Dr. Strange, whose footwear, it should be noted, is not in-character, although he got the mustache right:

There are other heroes at the convention, too, like the thoughtful people who are concerned about the health of your knees:

Personal bias: I always expect guys who are dressed up as The Crow to be whiners.

Here is the unlikeliest super-team ever: Superman, somebody from Street Fighter, Rorschach, Female Captain America, The Crow, and Guy With Stuffed Cthulhu. Together, they are...the 4C-4! Remember to credit me in your fanfics.

Comments 20
Tags: Books Blogs Nerd
The Stranger depends on your continuing support to provide articles like this one. In return, we pledge our ongoing commitment to truthful, progressive journalism and serving our community. So if you’re able, please consider a small recurring contribution. Thank you—you are appreciated!
CONTRIBUTE NOW