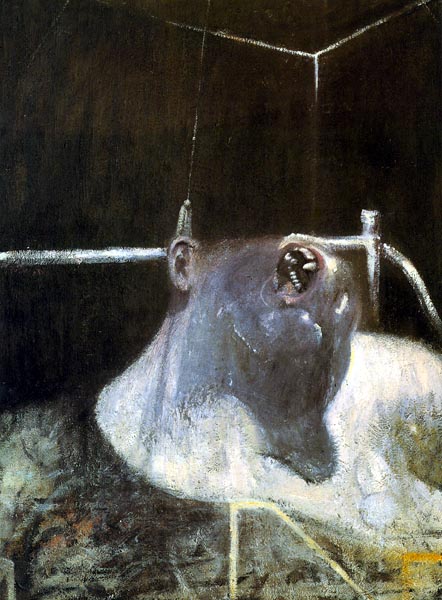 As I told you yesterday, Mario Vargas Llosa is the winner of the 2010 Nobel Prize for Literature. Predictably, most of his books are now knee-deep in holds at Seattle Public Library and sold out at most local bookstores. What's more, none of his books are available as e-books.

If you'd like to give Llosa a try—and you really should; he's probably one of the most readable Nobel winners to come along in years—there's a short piece in Harper's called "Bacon's Man," in which Llosa responds to the Bacon painting Head I:

I lost the left ear to a bite, fighting with another human, I think. But, owing to the little opening that remains, I hear the world’s noises clearly. I also see things, although askew and with difficulty. Because, even if at first sight it doesn’t seem it, that bluish protuberance to the left of my mouth is an eye. That it should be there, functioning, capturing shapes and colors, is a miracle of medical science...

It's just a little taste, but you can get a sense of his storytelling ability. I love the specificity and ambiguity of the word "human" there in the first sentence, for example; the narrator is explaining that he/it is also a human, in such a way as to make it feel casual. Even though it's like the least casual construction he/it could have employed. Go read the piece.

Comments 2
Tags: Books Visual Art Blogs
The Stranger depends on your continuing support to provide articles like this one. In return, we pledge our ongoing commitment to truthful, progressive journalism and serving our community. So if you’re able, please consider a small recurring contribution. Thank you—you are appreciated!
CONTRIBUTE NOW