A New Generation of Vertigo Comics

With Emerald City Comicon coming up this weekend, it's a good time to review some comics that have been hanging around the office for a while. I'm on the record as being a big fan of the golden age of Vertigo, from the late nineties to the early aughts—Sandman, Preacher, Transmetropolitan, and a few others—and I've lamented the lack of high-quality material they've been publishing since. But there's an interesting mini-renaissance going on at Vertigo; they're still publishing primarily supernatural horror comics, but they've broken free from the Sandman* mold by reaching for different tones and emotional palettes.

Jeff Lemire's Sweet Tooth is unlike anything Vertigo has ever published. It's about a simple-minded deer-horned young boy named Gus wandering around a post apocalyptic world. Volume two, In Captivity, focuses on a strange old man named Jepperd who takes Gus in and protects him. The story expands to include a prison camp full of other kids with animalistic features, and the scope tilts backward to explore Jeppard's story. Sweet Tooth, thus far, really feels like a novel, as though Lemire has the entire narrative sketched out somewhere. It's rare to find a monthly comic series that feels this confident and capable as it unspools. Lemire can illustrate a dream sequence that feels rock-solid, and he makes this dystopic future feel as honest as the world outside our windows. I trust him to take the story someplace great; it's been a while since I've felt this safe in the hands of a comics creator.

You can just tell that Vertigo wants Scott Snyder and Rafael Albuquerque's American Vampire to be one of their new flagship titles: The first collected volume, American Vampire, was published in a deluxe hardcover edition, and it features a backup story written by Stephen King. That's about as lush a treatment as modern-day comics get, nowadays. Snyder's lead story is about a young woman in 1920s Hollywood who gets mixed up in a vampiric conspiracy, and King's backup is an 1880s-set western about train robbery and, well, vampiric conspiracies. The scope of the series is apparently supposed to stretch across America's vampiric history, following a few characters as they connect, lose track, and reconnect. The surprising part of this first volume is how much fun King seems to be having; unlike most novelists-cum-comics-writers, he doesn't weigh the panels down with too many words, and his dialogue is vivacious and snappy. Snyder's story is more of a grower, as it expands out of the cliched first chapter into something that hints at the depth he's envisioning for the series. The problem with serialized comics is that sometimes you need a good long stretch of a comic to understand the rules; American Vampire is one of those series. I suspect that Snyder has a story that will get more gnarled and intricate and compelling as it expands. This volume is just a sampler that sets up something that could become really great.

I quite liked the first volume of The Unwritten when I reviewed it last year. It's a story of a young man named Tom Taylor whose father became a J.K. Rowling-style success. Taylor was the basis for the protagonist of his father's Harry Potterlike books, and he makes his living now, years after his father mysteriously vanished, by attending conventions and cashing in on the books' immense fandom. In the first book, it was suggested that Taylor wasn't real, that he actually was the character from his father's books. In Inside Man, the second volume of the series, we explore that idea a little further. Characters get caught in other stories, stories come to life and affect the real world, and Taylor is trying to figure out what is going on. The best part of The Unwritten is that is walks very closely in the shadow of Sandman while keeping its own flavor; both stories are about telling stories, but The Unwritten is more about the creation of stories, while Sandman was more about the way stories take on lives of their own. I expect as this series continues, it'll stray further from Sandman and become more meta; I have faith that series creators Mike Carey and Peter Gross will save it from self-indulgence. 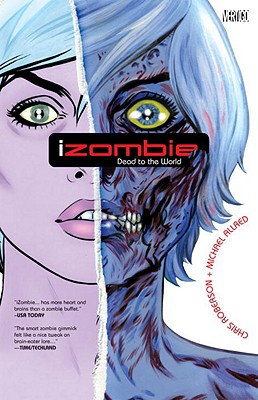 iZombie, despite the ucky name, is my favorite of Vertigo's new crop of comics precisely because it manipulates tone as a matter of course. It's not the Walking Dead knockoff you think it is; it's about a young dead woman named Gwen who has to periodically eat brains in order to remain young, beautiful, and cognizant. But Gwen's plight isn't fodder for pathos. The fact that Madman's Mike Allred is doing the art seems significant. Mirroring his pop-art illustration work, the story shouts back to the romance and girl's adventure comics of the 1950s and 60s. It's not for kids—the main character is a gravedigger, and death is practically a character in the series—but it has some carefree elements that evoke the fun of the days of comics past. A young man is stricken with a curse and becomes a were-terrier on nights with a full moon, a group of hot female vampires run a struggling paintball business which is just a front for culling victims. The first volume of iZombie, Dead to the World, could use more of a narrative arc—every collected volume of the Vertigo series traditionally have a beginning, middle and end, whereas Dead feels more like a meandering prologue—but I love that this book doesn't waste time on dourness. This book doesn't at all feel like old Vertigo. It feels like something friendly and new. There's nothing else like it being published today.

* I've said this before, and I'll say it again: I think Fables is just an off-brand Sandman knock-off. I think it's gone on way too long and stretched the idea way too thin, and I think when it eventually dies, nobody will remember it. Sandman is a classic. Fables is the Hydrox to Sandman's Oreos.

Comments 6
Tags: Books Blogs Nerd
The Stranger depends on your continuing support to provide articles like this one. In return, we pledge our ongoing commitment to truthful, progressive journalism and serving our community. So if you’re able, please consider a small recurring contribution. Thank you—you are appreciated!
CONTRIBUTE NOW