Who's Worse: Camille Paglia, Sanctimonious Liberals, or My Sniveling Self? 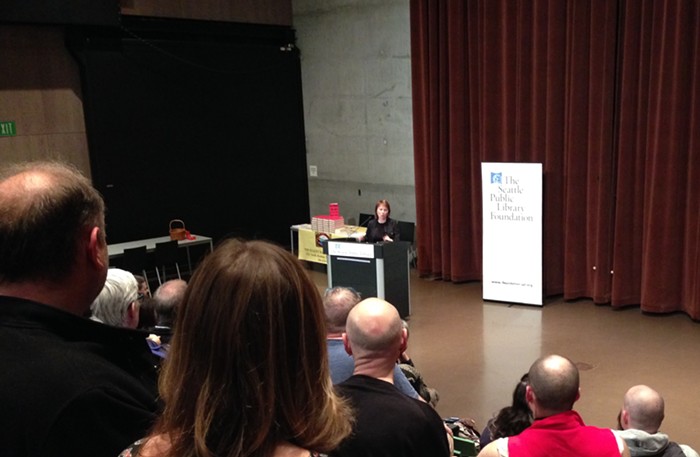 Paglia and her audience. RS

You've most recently heard Camille Paglia coming out of Milo Yiannopoulos's mouth. She's a proud equity feminist who rails against the censorious rage of Andrea Dworkin and Betty Friedan in favor of the sex-positive, self-reliant Amazon. Her heroines are late 1980s Madonna, Oscar Wilde, the Beat poets, and the big, loud Italian women of her New Jersey childhood. She's a free-thinkin', free speech-lovin', rock-n'-roll prof who's old enough to remember when Berkeley was the center of free speech, and not the center of protesters shutting down speech.

Monday night at the central branch of the Seattle Public Library, Paglia rolled out all those old hits. She doesn't particularly want to be on tour promoting her new collection of essays, Free Men, Free Women: Sex, Gender, Feminism, she says, but the woeful reemergence of "PC culture" has wrenched her away from her academic work (we'll get to that in a second, it's good) and forced her onto the ol' lecture circuit.

Paglia talks mile a minute and earnestly uses the word "see" as an interjection, as if she were a PI giving you the lowdown on a dame. The verbal tick would be endearing if it weren't for the fact that many of the sentences before and after it defy reason.

Granted, I have not read a word from her new book, and my summary of the lowlights from her lecture may suffer for that. She was playing a little loose with her claims. I'm merely going off what she felt comfortable saying in public to the packed house at Microsoft Auditorium Monday night.

• Her overall idea in the book, she says, is that women need to stop blaming men for their problems. But as Louis C.K. says in his stand-up special: men are the number one threat to women. He's not getting that idea from nowhere. According to the United Nations, approximately 33 percent of women worldwide will experience violence at the hands of their male partners. According to the National Sexual Violence Resource Center, 91 percent of the victims of rape are female. Women get paid less than men for doing the same work, and they have to do more work on top of all that because they have to put up with sexism on the job in ways that men don't have to. To the extent that women are blaming men for beating them up, raping them, and getting paid less than them, it seems like their case is pretty strong.

• Paglia says we need more biology and hard sciences in gender studies, which have for too long relied on the empty claims of poststructuralist frauds. Later, in an answer to an audience question about the difference between the sexes, she says that men and women differ in their sexual roles because boys must learn to aim when they pee and girls don't. She supports that claim by citing Freud, as well as her own idea that primitive men had to pee to extinguish campfires, a task that would "burn the hams" of women. Science!

• She says the kids these days—referencing her college students at the University of the Arts in Philly—are wrapped up in a frenzied search for identity. The kids are lost, and identity-obsession is the only way for them to find themselves. And yet she says she voted for Jill Stein (twice!) despite her affection for Trump, while also claiming to be a Democrat who identifies as a Libertarian. Renegade thinker, or evidence of a person wrapped up in a frenzied search for identity? You decide!

• She says she's an equity feminist who is against sexism in the workplace. Women need to stand up for themselves and not "replace men with the government" and their automaton bureaucrats! Women need to confront sexism the second it happens! Shout "no!" She's heard of too many women who don't do this, and it depresses her. Yet, she provides no backup plan for those women who do stand up and shout "no!" and are then are met with silence, or pink slips, or worse.

• As an equity feminist hardliner, she says if women start a Women's Club on a college campus, then men should be able to start a Men's Club where they can hang out and do mens stuff. Never mind that the entire world is already a men's club, and that creating oases from that world isn't such a bad idea.

• She essentializes, saying she loves the way heterosexual women and gay men communicate in groups. You know how they get when they're together, always speaking in a series of fragmented sentences: "Oh did you hear he...mhmm...that's what...yep, I know....mhmm." She's heard men say that they just don't understand that kinda talk, but she doesn't mention that a fucking 70-year-old man just won the presidency using that exact speaking style, which really resonated with the King-of-the-Hill-types who sit at the edge of their driveways, drink beers, and "yep-ing" each other all evening.

But worse than Paglia's series of creaky, barely substantiated claims—which, again, maybe she uses better evidence and addresses counterclaims better in the book, I can't be sure yet—was the anemic response from one of the audience members.

When question-time came, about eight people in total stepped up to the mic. Two of those people were women.

All of the question-askers ultimately praised Paglia. They are not the ones who concern me. The one who concerns me is the knight who took the microphone and said, "A lot of what you say is very, very offensive to me as a cis-gendered man living here in Seattle," blah blah blah you know the rest. His sanctimonious performance continued on for a few moments until one of the staffers from the library encouraged him to ask a question if he had one. He ended up asking her something like, "Do you even believe sexism is relevant?" before turning his back to her and retreating to his seat, seemingly happy with himself for making a stand.

Confidential to that dude: Thanks, dude, for being one of many haughty, liberal audience members who can't formulate a question that truly challenges people like Paglia. When you stumble through the vocabulary of intersectional feminism but fail to articulate any of its ideas, you only prove Paglia's point that liberal kids these days are a bunch of intellectually bankrupt pearl-clutchers.

None of these dudes is the dude I'm talking about. RS

Paglia's reply, by the way, was a doozie. She again reminded the crowd that she was an equity feminist, but stressed that we can't simply define ourselves solely by who we are in the work place or in the political realm. There are other, more "cosmic" truths. To think of ourselves only as social and political beings is a "betrayal of the cosmic vision of the 1960s."

She went on to say that she feels a "particular vibration," for instance, with the Native American culture of the northeast. She's been working on a book about these cultures for almost a decade, she said, but she has had to pause this great work in order to address the rise in PC-police culture.

I don't know about you, but I'm excited to learn about her "explorations" of these cultures. Maybe she'll go on tour with Lionel Shriver and they can tear up the college Republicans circuit. Who knows. But, for everyone's sake, I hope her scholarship on that subject won't be as perfunctory as her lecture from Monday night.