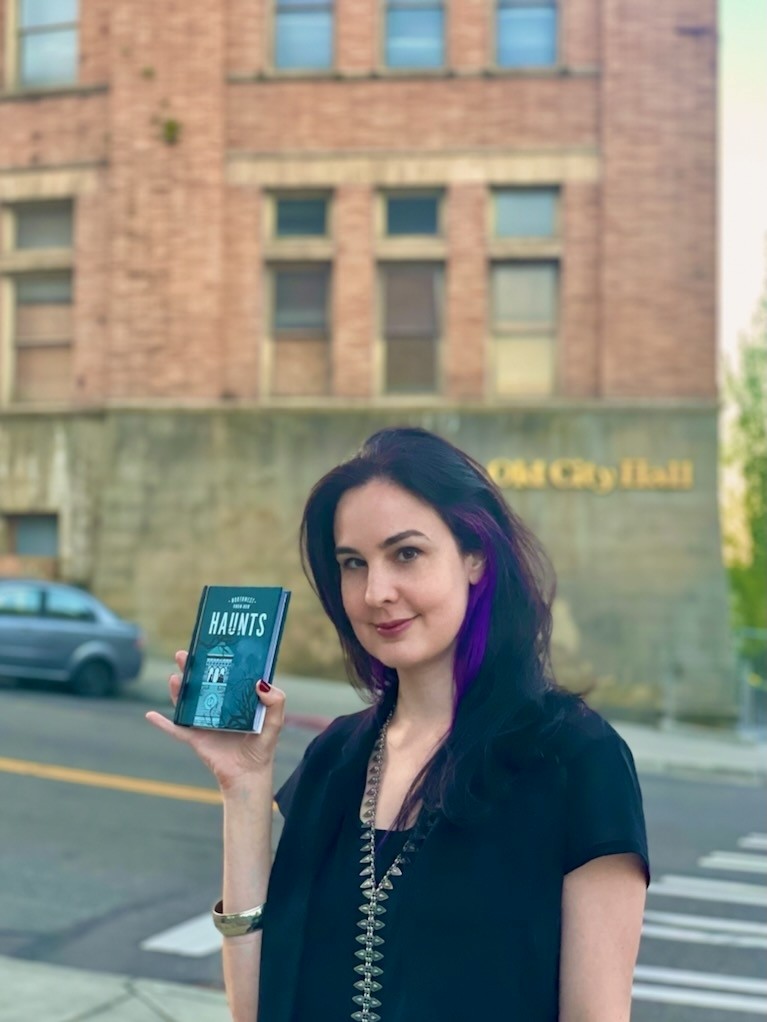 With this little book, you can hunt for haunted places in Oregon and Washington. Courtesy Sasquatch Books

One of the ghosts in the Pacific Tower, the Art Deco building that commands the northernmost point of Beacon Hill, is a nurse whose name is not known. She haunts the halls and rooms of what was, in her time (the 1930s), a hospital but became (in the 1990s) the world headquarters for a corporation, Amazon, that now has market capitalization that's nearly five times as large as the GDP of the country that has Transylvania as its central region. The thing with this particular ghost in the Pacific Tower is she's rarely if ever seen. Instead, the dead nurse haunts the living with a smell of a "rose-scented perfume and calls for people to wait for her."

Though this ghost is famous, I only learned of her existence (or, better yet, afterlife) from the pages of a new and little book, Northwest Know-How: Haunts, by the Seattle writer Bess Lovejoy.

Explore the haunted histories behind local legends. Learn about the real events that inspired Pacific Northwest ghost stories. Join author Bess Lovejoy for a conversation about graveyards, lighthouses, and more. Visit our event calendar to register. Go to https://t.co/ET0R4G1llD. pic.twitter.com/WWkB2lVkuV

"Some folks that always run to help the victim, deep down are attracted to pain and suffering and love to be near the dying," says Harry, the villain of Charles Burnett's masterpiece To Sleep With Anger. Something like this can be said of Lovejoy, but without the attraction being evil. It's instead deeply and poetically sympathetic. The dead are, in her world and her new book—a follow-up to her debut Rest in Pieces: The Curious Fates of Famous Corpses Pieces—human. These ghosts are not doomed to be bad and impose their misery, their hell on the living. Indeed, they may save lives, are playful, or are neither here nor there. They can also be stuck in this world because they loved it way too much. These passionate ghosts just want to dance again, fuck again, and drink wine again and again until the end of all time. These are the Pacific Northwest spirits we find in Bess Lovejoy's Haunts.

From her book's introduction:

Our earliest [Northwest] settlements could be crime-ridden—home to forced labor, smuggling, and exploitive sex work. All this generated intense emotions—fear, sadness, grief—which paranormal experts say can encourage hauntings. Some also think the water here acts as a ghostly conductor, bringing messages from other realms; in this sense, the rain is a spiritual fertilizer.

The surprise is that many Northwest ghosts are not all that dark. A number are friendly presences who watch over beloved former homes and businesses.

Lovejoy's guide book, which is superbly researched (she often supplies the names of the lost), covers haunted theaters, bars, hotels, parks, cemeteries, and other establishments in Washington and Oregon. (I wish the book included British Columbia, an area Lovejoy is very familiar with.) My feeling is that Oregon is more haunted than Washington and the reason for this can mostly be attributed to McMenamins' business model as it specializes "in saving local historic properties from doom." Still, Washington has the greatest haunted cemetery in the region, the John S. McMillin Memorial Mausoleum on San Juan Island.

Hike an overgrown path through the woods near Roche Harbor (look for the signs saying “Afterglow Vista”) and you’ll come upon one of the most interesting funerary monuments in the United States... The centerpiece is a limestone table surrounded by chairs, one for each McMillin family member and arranged in the same spot as they sat at the dinner table. Beneath the chairs are their ashes. As the sun sets on  summer evenings, some say you can see ghostly outlines of the family having dinner together once again.

But be they in Oregon or Washington, the ghosts are similar in the sense that they are often found in mirrors or in the windows of old buildings or vanishing as soon as a living person wants to see them clearly. If they are seen in a room or hallway for a length of time, they tend to have no feet or float above the ground (or both). They also have a thing for dramatically chilling a spot or section of a space where something horrible has happened. A lot of ghosts want to continue doing what they did when alive, some ghosts just want to be left alone (life was bad enough), and there's a ghost who puts "wet hands on [your] shoulders."

Does Bess Lovejoy believe in the ghosts collected in this beautifully written book? That is the wrong question to ask. It's not really about belief or disbelief. It's about how we as humans relate to death, the unknown. We are an ultra-social animal, and so this means the ghosts must exist. You can't be so close to other humans in life without being equally close to humans in the region we are all heading to, the region of the dead.

Bess Lovejoy will discuss Northwest Know-How: Haunts in a virtual event presented by the King County Library System on Wed Oct 19 at 6:30 pm.