She lives near Seward Park and visits almost daily. It's one of the settings in her short story "The Following." Kelly O / lettering Mike Force
Tweet

How particles of identity shift in response to particles in the environment.

A brilliant novel and two books of stories, including wrenching depictions of mountaintop removal and hydrofracking.

"Transforms the hurt into something beautiful."


Ann Pancake was raised in West Virginia, the seventh generation of a family in one of the oldest mountain ranges in the world, and she suspected at a young age that art would be her way out. "What I really thought I was good at was my trumpet," she said the other day in Seward Park, laughing. "I thought my trumpet would get me out of West Virginia."

Only 8 percent of people in Hampshire County finished college. The family had a TV, but it got only one channel, and there wasn't much else to do, "so I read voraciously." She went to college, taught abroad for a while, then got a master's degree in English literature and later a PhD at the University of Washington, where she studied Appalachian literature and 1930s social-realist and political novels.

She lives in Columbia City and told me that Seward Park is the basis for the park in her short story "The Following," in which a woman who feels like her life is "being dismantled" follows a feeling "into drenched salal, English ivy, Oregon grape." The feeling leads her to sublime encounters with dead animals. Meanwhile, world events are churning through her mind: "BP annihilated the gulf, and a coal company with a criminal environmental record slaughtered 29 miners in the hills not far from where I'd lived as a child." The incidents are among "what I shorthand-called the Great Losses of These Times—the atmosphere boiling, the Arctic thawing, oceans rising, species dying." 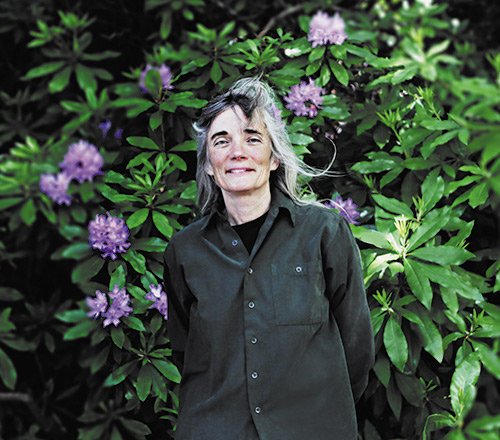 Pancake is the author of the underrated, awe-inspiring novel Strange as This Weather Has Been, and two books of short stories.Kelly O

"The Following" appears in the collection Me and My Daddy Listen to Bob Marley, published February 2015. It's her third book, after the award-winning Given Ground and the underrated, awe-inspiring novel Strange as This Weather Has Been. In keeping with Appalachia's strong oral tradition, Strange as This Weather Has Been is told by a variety of narrators, all living in poverty under mountaintop removal mines, aka "the machines working overhead." The colloquial rhythm of the language makes the corporate destruction all the more stark and nauseating. "After they blasted the top of the mountain to get the coal, they had no place to put the mountain's body except dump it in the head of the hollow. So there it loomed. Pure mountain guts." When the floods come down the mountain, it's a "foaming face" of water "the color of chocolate milk," carrying car parts, mattresses, logs, and chemical toxins, killing pets and people.

What's most genius about the novel is its depiction of how particles of human identity shift in response to particles in the environment. A mom looks at her baby daughter and worries her depression has "seeped into her." A character says of the mining company, "It was like they were knocking down whatever it is inside of you that holds you up." A woman who sees a mountaintop "amputated by blast" feels the sight like a punch in the chest, and her first thought is "How lucky Grandma died." An old man has a weird dream where a doe walks up to him in a grassy clearing and says, "This is what it's like in my head," and then he watches as the doe "shelled her head open. It just fell open in easy halves."

West Virginia has one of the highest rates of depression, disability, obesity, and poverty in the country. "I really do see it as a harbinger of where the nation as a whole is headed as corporations have more and more control of government," Pancake said. The political climate of West Virginia is paid for by coal and natural gas. The novel forces you to consider: Who does it enrich, anyway, blowing up all those mountains? It certainly doesn't enrich the families who've lived there for generations. It enriches an energy company. Pancake is writing some of the most important fiction of our time.

After all, you know how the Koch brothers got their money, right? They inherited an energy fortune.