Before I describe the conversation I had with Sarah Galvin, author of The Best Party of Our Lives, you need to know that the book was inspired by a few Wedding Crasher columns published in this paper, and that she and I are friends. If you find such a conflict of interest unforgivable, well, you may have come to the wrong newspaper.

In her latest book, Galvin interviews and recounts the stories of 23 couples—the majority of them seriously committed for more than a decade—whose weddings followed shortly after the legalization of same-sex marriage.

Were you to judge it by its cover, you might think that Best Party runs the risk of reducing a monumental historical moment to a household accessory. The subtitle, "Stories of Gay Weddings and True Love to Inspire Us All," doesn't help. 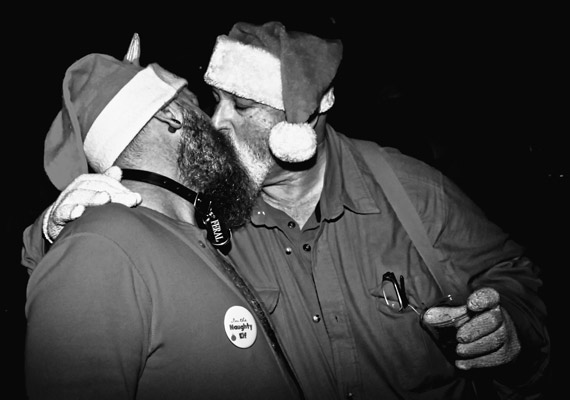 Beneath the caps and beards are Jeffrey and Rodney. According to Sarah Galvin’s book, The Best Part of Our Lives, their marriage allowed their son, Chris, to legally be considered their son. Before Referendum 74, as Galvin writes, Rodney was designated a “primary parent.” Chris Schanz

The stories pretty much all follow a close formal structure: Meet A and B. Their favorite kind of music is C. After Referendum 74 passed, they decided to get married when D. The wedding was lovely and particular in ways X, Y, and Z, and now they're in love until death do them part.

In short, Best Party looks like something you might notice while in line at the grocery store, buy on impulse in an effort to flatter your liberal self-conception, and then display in a conspicuous spot to let your houseguests know they are in a progressive home. It looks like the kind of book you flip through, not the kind you read.

But Galvin is a writer you can't stop reading, which makes the whole project more interesting than it appears. She manages to estrange the bathroom book format by pulling out deeply weird facts about her subjects—one blurts out a cat's name while exchanging vows, and another dresses up as a cow stuffed inside an olive—and peppering the writing with lines like "I served enough champagne to fill a Cadillac and enough hors d'oeuvres to bury one." I'd happily pay $50 for that line and many others in this book.

Galvin wanted to include more personal observations in the stories in order to liven up the form, but she soon realized that this was more a social/historical document than a book about the way she perceived gay weddings. This realization was greatly aided by Edie Windsor, lead plaintiff in the case that led to the fall of the Defense of Marriage Act, whose tear-jerking blurb on the back notes the historical importance of telling these stories. 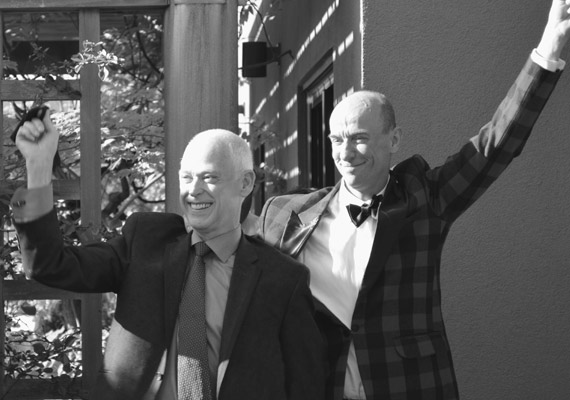 But the book serves another historical function. Aesthetically, the traditional cisgender hetero model for marriage has been well-documented, but the stories Galvin writes about highlight ceremonies that don't necessarily involve someone in a black suit standing next to someone in a white dress. One of the book's subjects, for instance, proposed to her partner with an engagement grill basket instead of with a ring. One reception was held at the bar Pony, complete with go-go dancers and pizza, and another in an apartment surrounded by seemingly millions of dollars' worth of art.

These fresh, particular, and varied ceremonial models reflect the many different kinds of families that formed from these unions. Some had kids, some didn't. Some were monogamous, some weren't. Some couples lived together, some didn't. If we see more of these kinds of relationships, our expectations of what marriage should be or should look like might become less rigid. And after that happens, it may even be possible to wrench the idea of a love commitment away from marriage's purely legal, property-based past.

But maybe I've just had too much emotional champagne. 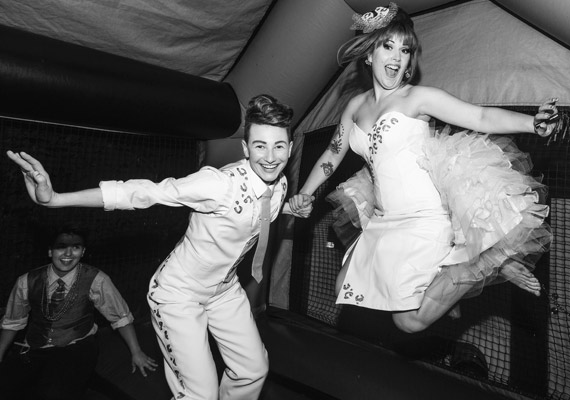 That’s Lou on the left and Kitten on the right, better known as the burlesque/dance/drag duo “Kitten N’ Lou.” They’re pictured here jumping up and down in a bouncy castle, which they set up for their wedding reception. Galvin said this wedding was perhaps the most fun wedding she’d ever attended, mostly because it featured a fucking bouncy castle. Nate Gowdy

To the extent that the book is a historical document, Galvin hopes it's one that will be relevant for only about 10 years. "Hopefully by then, people will be like: 'Why did you have a book about gay weddings? Those are just weddings,'" she said.

Despite her wish for the book's obsolescence, she doesn't at all regret working on it. Writing the book, she says, better acquainted her with the queer anti-marriage sentiment she hadn't explored much before. "A lot of people thought the fight for marriage equality was taking awareness away from trans people of color, queer poverty, or queer homelessness, particularly among young people," she said. "This isn't the end of the road, but we've had a big win with this. It's made a lot of people's lives much easier and happier."

Sarah Galvin will have a launch party for her new book at Hugo House on December 20.

Sarah Galvin: The Best Party of Our Lives

Anatomy of a Sarah Galvin Poem