We Saw You Sliding on Steel Panels in the Rain, Captaining a Ferryboat, and Singing Alanis Morissette Perfectly

Stranger Staffers Were There As It Happened

1
IIRC, the problem with the restrooms was that transients were shooting up and fucking in there.
Max Solomon on January 6, 2016 at 11:10 AM · Report this 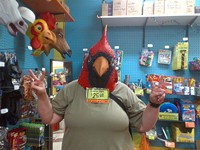 3
This was boring. I hope next week is better. I'm still pining away for "Last Days". The Stranger isn't quite as interesting as it used to be...
DrummerGrrl on January 7, 2016 at 6:57 PM · Report this

7
Back in 2003, the City of Seattle bought FIVE supposedly fancy public toilets that it turned out didn't work for shit. The total cost to the city: $5 million. The amount these things sold for on eBay (yes, really, eBay) when the city finally gave up on them was $2,500 each.

In addition, the purchase took place after about ten years of debate. The French manufacturer of the toilets you see in San Francisco (the same kind as in Paris), JCDecaux, offered them to Seattle for free, as long as the toilets could have advertising. But Seattle had some kind of a ban on public advertising and couldn't (or wouldn't) make an exception, even if it meant getting five free public toilets.

And then, once Seattle spent all that money on them, authorities were incapable of keeping them being overrun with -- as Max @1 said -- transients shooting up and fucking in there. Somehow, San Francisco -- which I believe has a transient/homeless population just as big as Seattle -- is apparently able to keep their public toilets from being overrun by drug users and people fucking. And the same for Paris. But Seattle? Seattle was helpless (Seattle probably didn't want to offend the transients/homeless by telling them to not do drugs and fuck in the toilets) and had to get rid of the toilets.

It's the most pathetic thing I've seen by this city since I moved here over thirty years ago.

Same here. "Last Days" was always my favorite part of The Stranger. I loved David Schmader's writing and sense of humor. The replacement feature is OK, but nothing like "Last Days."
Roma on January 9, 2016 at 5:29 PM · Report this

9
2/Big Matt G: @1) I don't understand how that would constitute a problem. Were they taking too long in the public bathrooms?

Here's a an article from 2008 in the NYT about Seattle's public toilet debacle:
Seattle to Remove Automated Toilets
http://www.nytimes.com/2008/07/17/us/17t…

The article says: In the end, the restrooms, installed in early 2004, had become so filthy, so overrun with drug abusers and prostitutes, that although use was free of charge, even some of the city’s most destitute people refused to step inside them. . . Seattle officials say the project here failed because the toilets, which are to close on Aug. 1, were placed in neighborhoods that already had many drug users and transients.

In contrast, the article says this about public toilets in Los Angeles: Thirteen are operational so far, with two more coming this fall, said Lance Oishi, who leads the project for the city. Six of the units are downtown near Skid Row, but others sit near transit stations or shopping areas, Mr. Oishi said, and, contrary to Seattle’s experience, all 13 have remained clean and largely crime free.