A $1.5M settlement for a Nazi-sympathizing officer in Kent has revived advocates' hopes for a legislative fix 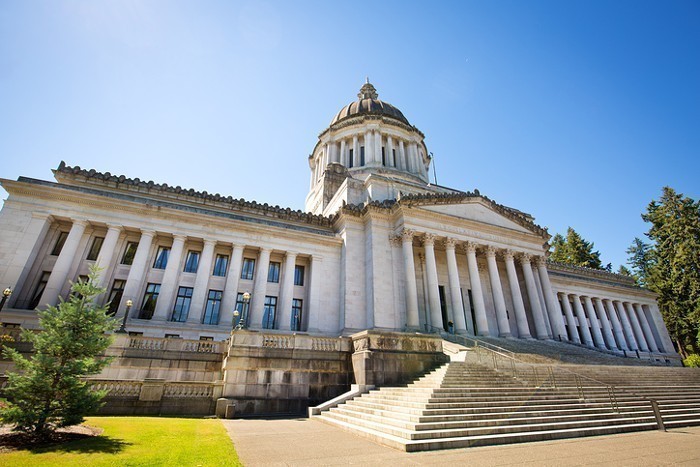 Advocates say the State Legislature could strengthen police accountability procedures AND save a bunch of taxpayer money next session. Yinyang | Getty

Police accountability advocates had hoped the State Legislature would build on reforms from 2021 in this last session, but an atmosphere hostile to the issue dashed those hopes when one key reform died in committee.

Had lawmakers in Olympia passed that reform, the assistant police chief in Kent who just received a $1.5 million settlement to leave his job could have been the last bad cop to receive a massive check instead of a pink slip. Instead, he’s just the latest example of how arbitration makes a laughing stock out of efforts to hold police officers accountable for misconduct.

Arbitration is a common feature of many police union contracts, which gives officers facing disciplinary action the right to appeal that decision to a private arbitrator. The arbitrator then has the power to reverse any discipline and even order the police department to rehire the officer.

In the case of Kent’s assistant police chief, arbitration complicated city leaders’ efforts to correct an initial error of judgment. After an investigation by an outside law firm found that the officer had no plausible explanation for displaying Nazi iconography in his office, the mayor and police chief only suspended him with pay for two weeks. Once community members and advocacy groups protested the lenient discipline, however, the City opted for a taxpayer-funded settlement to get out the officer of the department. In a press release, they said they opted for this course of action out of near certainty that firing the officer would lead to an arbitrator overturning the termination due to double jeopardy concerns.

Stephen Paolini, Associate Regional Director for Anti-Defamation League Pacific Northwest, said in an interview that allowing arbitration to operate this way when police officers face accusations of misconduct is an "intentional policy choice." He stressed that the price tag for this settlement should drive home for policymakers that these issues with accountability are systemic and need a statewide solution.

One potential fix, SB 5677, which was sponsored by Senator Jesse Salomon, never made it out of committee last session. If it had become law, though, Salomon told me in an interview that future cases like Kent’s would “definitely” produce a different outcome. His bill, developed by the Washington Coalition for Police Accountability, would require municipalities to establish procedures that meet a set of minimum standards for receiving complaints and conducting investigations regarding “serious misconduct” by police officers.

According to Enoka Herat, a lawyer with the ACLU-WA who worked on the bill, those standards will put police officers on equal footing with other public employees like teachers when appealing disciplinary action. Instead of allowing arbitrators to essentially conduct their own review of the alleged misconduct from scratch, the bill would limit the scope of any officer’s appeal to only overturning discipline that’s arbitrary or capricious.

Over the phone, Senator Salomon expressed a kind of macabre optimism that his “redoubled” efforts could get the bill across the finish line in 2023. He said that it “really fucking sucks” that it might take an “international embarrassment” like the settlement for Kent’s assistant police chief to build the political will needed to pass this reform.

Salomon’s Democratic challenger this fall, Dr. Patricia Weber, also expressed support for prioritizing police reform if she takes Salomon’s seat in the Senate. She said that the public’s frustration over failures of accountability in cases of excessive force and discriminatory treatment merits a much closer look at the issue when the State Legislature reconvenes in January.

For advocates like Herat, the renewed interest in shoring up the mechanics of accountability is long overdue. In her view, police officers have received special treatment compared to other public employees in matters of discipline for far too long. In order to rebuild public trust in law enforcement, she said, people need to see a fair, transparent, and consistent process for holding officers who violate the public’s trust accountable for their misconduct.

If that also saves taxpayers millions of dollars in settlements to make bad cops go away, even better.