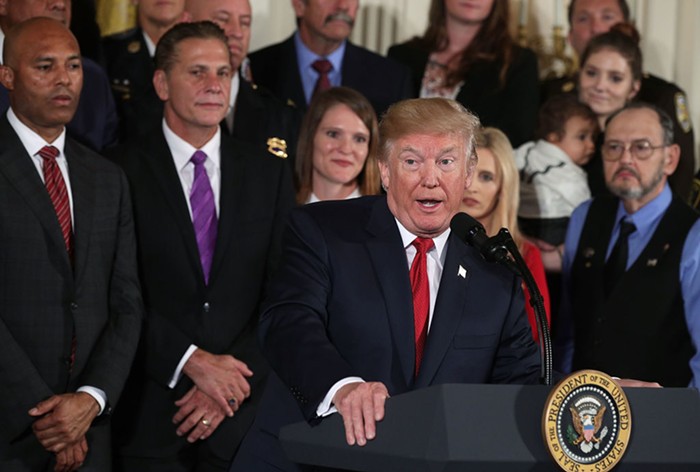 Trump plans to work with Congress to fund the opioid crisis. Because he's been so successful working with them in the past. Alex Wong/Getty Images

On Thursday, the President declared that America's opioid problem is a "public health emergency." This declaration may sound like Trump was actually making good on a promise he made in August, when he said, “We’re going to spend a lot of time, a lot of effort, and a lot of money on the opioid crisis.” But, no. Trump was lying again, at least about the money part.

Contrary to his promises, merely calling the opioid crisis a "public health emergency" does not actually designate any funding to fight it. Instead, an administration insider told the New York Times, Trump will work with Congress to secure the necessary funding in a year-end spending package. Because that's gone so well in the past. (Oddly, Trump also said that "We can be the generation that ends the opioid epidemic,” during his announcement, which makes you wonder, what generation is he talking about? Baby boomers? Or does he think that because he tweets like a millennial he is one?)

Preceding Trump's announcement, evil elf and Attorney General Jeff Sessions used a question and answer session at (naturally) the Heritage Foundation to call back the Just-Say-No-This-Is-Your-Brain-On-Drugs Reagan years: "People should say no to drug use. They have got to protect themselves first," Sessions said, before blaming the opioid crisis on weed, despite the fact that the myth of the "gateway drug" has long since been disproved and the vast majority of cannabis users never go on to using harder drugs. In reality, a much greater indicator of drug use is poverty. Should the administration declare a war on poverty—and actually follow through with it—maybe then we'd actually see a decline in drug use, but falsely equating marijuana with opioids isn't going to save any lives. In fact, medical cannabis has been shown to decrease the use of opioids and other prescription drugs, as I wrote about in a Stranger feature last week.

So what should Trump have done if he actually wanted to do something about opioid deaths? Had he declared a national emergency rather than a public health emergency, it would have immediately released federal money, which would have gone to drug treatment programs like King County's Evergreen Treatment Services (ETS). With additional funding, ETS would be able to increase access to medication-assisted treatment like methadone, which, research shows, is the most effective way of helping people get and stay clean. Currently, much of this treatment is paid for by Medicaid, which, of course, Trump has repeatedly promised to cut.

Of course, none of this will happen, despite Trump's big announcement. Declaring the opioid problem a "public health crisis" isn't going to save anyone. But by dismantling the Affordable Care Act, reducing the number of insured, and gutting Medicaid, the Trump administration is going to make this problem a whole hell of a lot worse.