We Believe You Should Vote No on Initiative 732 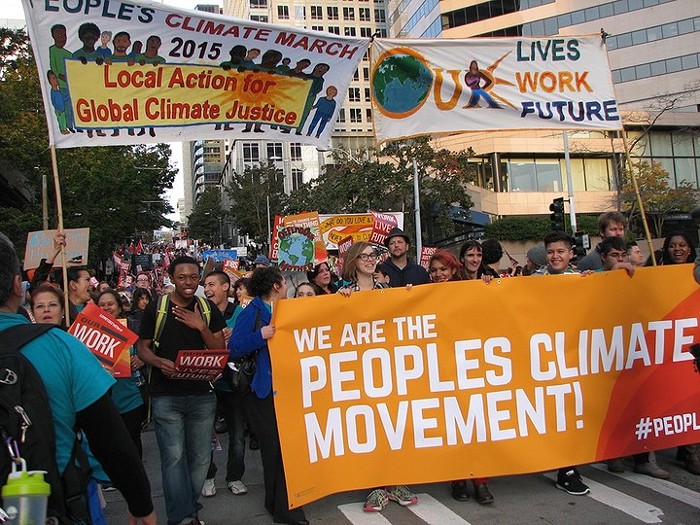 The climate change policy on your ballot looks good. It's not. Sydney Brownstone

[Update: The response from the campaign for Initiative 732.]

The members of the SECB who voted to endorse Initiative 732 will tell you that we are making the perfect the enemy of the good.

It is not good climate policy. It is not good tax policy. I-732 is an actively bad policy disguised as a ground-breaking progressive idea. In our opinion, it threatens not just the climate movement but much needed state revenues that fund social services, education, and other basic needs. It also fails to center the climate movement on those most adversely affected by climate change: communities of color.

Supporters will try to convince you to support the initiative because it is something—anything—to address climate change (any policy is better than no policy). We agree climate change is urgent.

But I-732 does not actually effectively address climate change. And it may torpedo the state’s best efforts to pass future, better climate standards.

On climate mitigation, a carbon tax alone doesn’t do very much at all. Based on what we’ve seen in in British Columbia and California, a carbon pricing mechanism only works to reduce emissions alongside a strong emissions cap, strong regulations, strong performance standards, and strong enforcement. The state is working on one of those things, but that cap will only start working in 2017 and reduces emissions by a measly 1.7 percent a year. (Some of the state’s biggest polluters don’t even have to start following the cap until 2023!) So when I-732 backers say, “We need to pass this now because it’s a presidential election year,” that’s bogus. We could pass better policy in 2020, and its actual impact on emissions would be comparable because of the cap’s timeline.

What a carbon tax can do is help us adapt. It can raise much-needed resources for clean energy research and development and transit; it can help us invest in communities that will be the hardest hit by climate impacts. But I-732 doesn’t do any of this. The initiative contains an increase in the Working Families Tax Exemption for low-income communities and a cut to the regressive sales tax, but environmental justice communities have already rejected that idea as insufficient. A tax credit is not the same thing as investment in education, social services, or clean energy jobs. By throwing money at imaginary sensible Republicans and Boeing, I-732 adapts us for nothing.

Why I-732 Is Bad Tax Policy: In order to make the proposal “revenue neutral,” I-732’s authors have created a tax swap. In exchange for taxing emissions, the policy cuts business and occupation taxes for manufacturers and the sales tax.

But an analysis from the state’s Office of Financial Management found that I-732’s scheme may not be neutral at all. Instead, OFM estimates the initiative could blow an $800 million hole in the state budget over five years. (Supporters have issues with that estimate and prefer to look at a different analysis, which estimates a $78 million shortfall per year.)

I-732 would also deliver a windfall to Boeing—the company whose taxes breaks we and others have been denouncing for years. Under the plan, Boeing would have its B&O taxes slashed to nearly zero while paying little in carbon taxes. The initiative authors admit this was a mistake.

Plus, if the initiative works—if it reduces carbon emissions—the revenues from the carbon tax will decrease over time too. If, a decade from now, emissions have significantly decreased in Washington, then revenues from this new tax on emissions will have decreased as well—with nothing to backfill that loss. Unless the legislature finds new revenue in that decade, that would leave the state facing a shortfall. To fix it, our tax-averse state legislature would be responsible for passing new taxes or, more likely, making cuts. In a state already underfunding education and mental health care, counting on the state legislature to fix the problems baked into I-732 is a dangerous gamble.

Why I-732 Is Bad Politics: Back in 2014, a coalition of environmental justice, mainstream enviro, and labor groups came together to start talking about climate policy in Washington. This was pretty much unprecedented. They knew the only way to work on climate was to assemble a broad and deep coalition of interests that are supposed to be on the same side, but often end up fighting one another. Those groups, known collectively as the Alliance for Jobs and Clean Energy, have been working to develop climate legislation ever since.

Then I-732 came out of nowhere. These scrappy upstarts wanted a revenue-neutral policy to try and appease Republicans, which never really worked. Polling results that 732 proponents circulated in December showed their approach polled lower than a plan that would actually raise new money. So the Alliance initially shrugged off I-732. Bad mistake: The idea gained traction among some in the environmentalist community and some economists and I-732 decided to run their ballot initiative anyway.

When it came time for the two sides to negotiate, the founder of I-732, a “standup economist” named Yoram Bauman, flitted away the Alliance’s social justice lens. He even went as far as to say that the Alliance was using “race and class as political weapons” to pursue bigger government at all costs.

Bauman’s words weren’t just a gaffe. They were a window into the crisis of the new millennium. The future of the climate movement does not lie in solutions created by the white environmentalism of the past 100 years. In order to address climate change, we must address its root causes, causes from which systematic environmental racism cannot be separated.

I-732 is a bad policy that some smart and well-meaning people like. But the people behind I-732 are not the same people who should be telling the state what to do on climate policy.

The groups that have been meeting with the governor since 2014 actually represent the communities of color that will most directly be impacted by climate, workers who want to transition to clean energy jobs, and hardcore climate wonks.

Passing I-732 could destroy the work that these groups have been doing together over the last two years in favor of something unproven and socially regressive. Don’t vote for it.

The four members of the Stranger Election Control Board whose names appear at the top of this post voted against endorsing I-732. The remaining three members of the board voted to endorse. The Stranger's publisher, who does not vote on endorsements but has veto power, overrode the 4-3 vote to endorse I-732. It was the only time he used his veto this year (or in any recent year).

Comments 61
Tags: Enviro 2016
The Stranger depends on your continuing support to provide articles like this one. In return, we pledge our ongoing commitment to truthful, progressive journalism and serving our community. So if you’re able, please consider a small recurring contribution. Thank you—you are appreciated!
CONTRIBUTE NOW