Things To Do All Events Readings & Talks Author Signing

I'm continually surprised that Maggie Nelson's brain doesn't constantly burst into flames. She has one of those minds you wish you could just download. This is all to say that her thinking is lightning fast and her syntheses of various theorists refreshes the world. In her most recent book, for instance, The Argonauts, which is up for a National Book Critics Circle Award this year, she uses queer theory to explore motherhood, love, and indeterminacy. Throughout the book she grounds these abstract ideas in discussions of people and things that are not one but not quite two: a ship called the Argo, a pregnant woman, labia, the gender of a butch on testosterone. For days after I read the book, I was constantly scanning my world for similar nonbinary phenomena. Her lecture at Hugo House will be all about writing the body, which is something she's does a lot of in The Argonauts but also in her New York Times Notable Book of the Year: The Art of Cruelty. Oh, and, BTW, if you happen to be going through a breakup right now, then read Bluets. I dare you. RICH SMITH 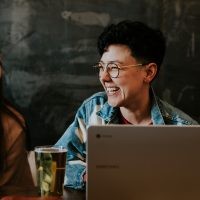