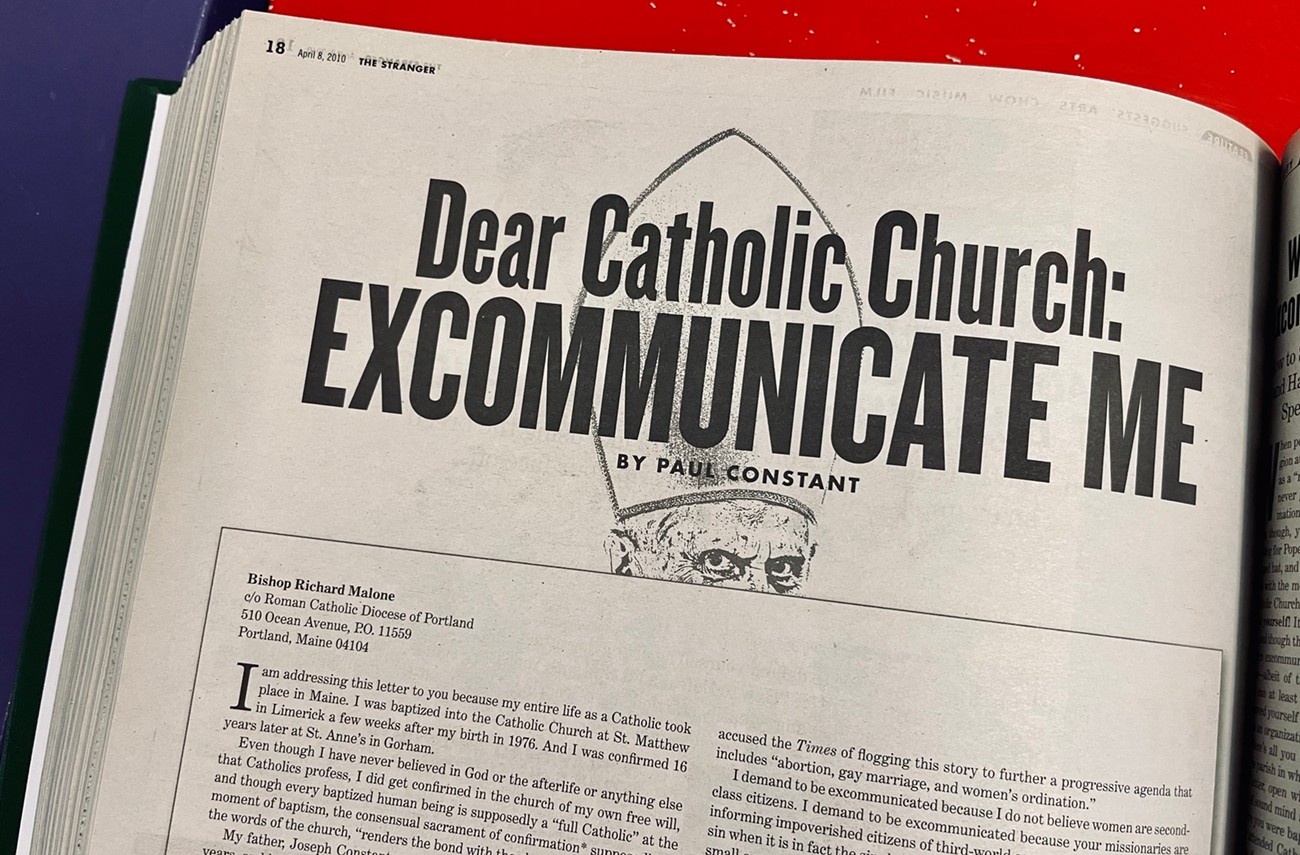 I am addressing this letter to you because my entire life as a Catholic took place in Maine. I was baptized into the Catholic Church at St. Matthew in Limerick a few weeks after my birth in 1976. And I was confirmed 16 years later at St. Anne's in Gorham.

Even though I have never believed in God or the afterlife or anything else that Catholics profess, I did get confirmed in the church of my own free will, and though every baptized human being is supposedly a "full Catholic" at the moment of baptism, the consensual sacrament of confirmation* supposedly, in the words of the church, "renders the bond with the church more perfect."

My father, Joseph Constant, worked his whole life, adored his wife for 45 years, and loved us no matter what. And I decided when I was 16 that as long as I was living under his roof, I would continue to be a full member of his church. He wanted to meet us again one day in heaven, and he believed that there was only one way to do that: by believing in the One Holy Catholic and Apostolic Church. My confirmation was a tribute to him, but it only went so far: After I struck out on my own, I lived as an atheist.

But I suppose that, technically at least, I'm a Catholic, one of the millions of Catholics whom American bishops profess to lead and, when the church inserts itself into our political process, claim to speak for.

Today, Bishop Malone, I am demanding that you excommunicate me. I cannot in good conscience belong to your church anymore; I do not want to be counted with the 200,000 Catholics in Maine, or the 68,115,001 Catholics in the United States of America, or the 1.1 billion Catholics in the world.

I have been watching the events of the last few weeks with horror. The pope (an ex–Hitler Youth whom your fellow bishops used to refer to, lovingly, as "God's rottweiler") whined during a Palm Sunday homily about what he called "petty gossip." That "petty gossip" is a tsunami of reports of child rape perpetrated by Catholic priests across the globe and attempts by bishops, archbishops, cardinals, and the pope himself to cover up that child rape by moving ordained rapists to new parishes where they could, and did, rape again. That "petty gossip" includes one case in which the pope halted an internal investigation of a Catholic priest in Wisconsin who is alleged to have raped more than 200 deaf boys.

And then, on March 30, Bill Donohue of the Catholic League for Religious and Civil Rights placed an ad in the New York Times dismissively accusing the Times of "looking for dirt" that "occurred a half-century ago" and saying that the church's "pedophilia crisis" has "all along" been a "homosexual crisis." He accused the Times of flogging this story to further a progressive agenda that includes "abortion, gay marriage, and women's ordination."

You might ask, Bishop Malone, what my father will think of all this. Joseph Constant died on August 20, 2009, after a long battle with acute pulmonary fibrosis. The sacrament for the sick gave him great comfort at the end, and I thanked the priest for administering it. But then, at a mass that was dedicated in Joseph's name in September, instead of a homily about how Joseph lived the kind of life that other Catholics should emulate—generous, faithful, good, true—the priest showed a video. You came on the screen that had been set up on the altar (as you did in all the other Catholic churches across Maine that weekend), and my family was forced to watch as you gave a hate-filled lecture about why Maine's pending gay marriage law must not be allowed to come into force, and then you had every church under your control pass the collection plate a second time solely to collect funds to fight marriage equality. (Thanks in large part to the Catholic Church's efforts—efforts that included threats to remove charitable Catholic organizations from the state if the law was approved—gay marriage remains illegal in Maine. You must be so proud.) You took an occasion intended to celebrate my father's life and spoiled it with hate speech.

And so it is with deep personal satisfaction, sir, that I say—and I'll put it so you can understand it—to hell with you, Bishop Malone. To hell with your church. To hell with the pope, especially. If you think the Catholic God actually smiles down on you from heaven for your hatefulness, then to hell with that God, too. I renounce your church, your God, and your traditions. I will not be a part of any organization that welcomes and comforts hatemongers, child rapists, or you.

I demand that you excommunicate me immediately and that you send me confirmation as soon as possible that you have expunged me from the roster of the Catholic Church.

* You may wonder why I go on to explain the sacrament of confirmation to a Roman Catholic bishop. This letter is not just for you, Bishop Malone; it's an open letter, published in print and online, and by the time you get your copy in the mail, tens of thousands of people—at least—will have already read it. Some of these other readers will not be Catholic, and consequently, they will not be familiar with this uniquely Catholic sacrament. As I don't want non-Catholic readers to go "confirma-huh?" and turn the page, I thought I would explain it for them. Because I want as many people as possible to read this, and I want them to read it all the way through. I want the whole world to read it. I do not want anyone to ever associate me with the likes of you ever again.

Comments 156
Tags: Features
The Stranger depends on your continuing support to provide articles like this one. In return, we pledge our ongoing commitment to truthful, progressive journalism and serving our community. So if you’re able, please consider a small recurring contribution. Thank you—you are appreciated!
CONTRIBUTE NOW