The Overnight Shift at a Homeless Shelter 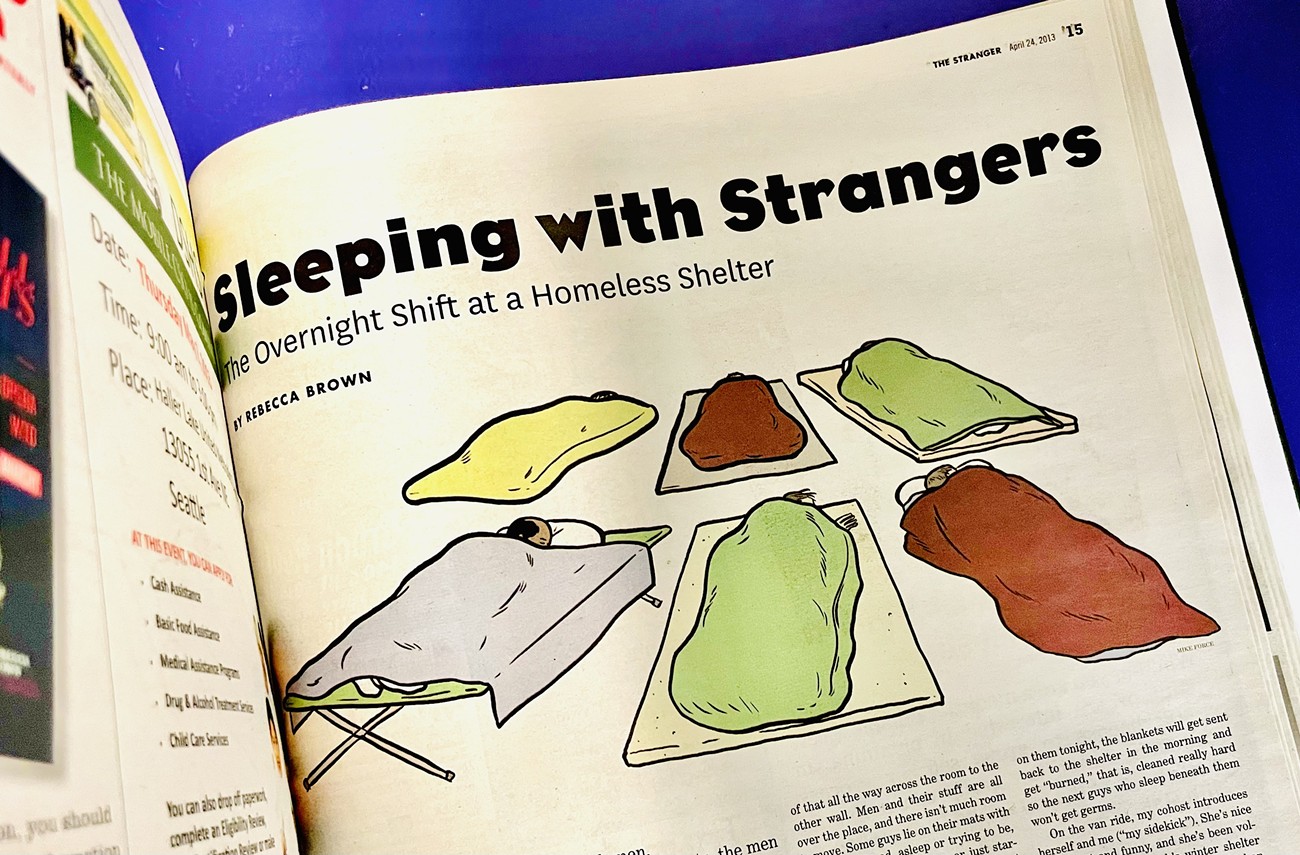 Once a month or so, I sleep with men.

Fourteen or 15 usually. We sleep on mats, the men on the floor of the gym and me on the floor of the storage room off the little kitchen by the gym. Before the men arrive, the other winter shelter host and I put the mattresses out on the gym floor and a chair beside each one so the men can put whatever they have somewhere. We get out juice and cheese and crackers and instant soup and peanut butter and jelly so they can make themselves a snack. Some of the men, as soon as they arrive, go straight to sleep, but some of them want to stay up and read the paper, if one of us remembers to bring it, or watch a video on the TV in the kitchen, though mostly we just hang around together. The men are there because the downtown shelter where they usually go has "overflow" in the winter, so other places, mostly churches, open up for them.

This past January, the One Night Count conducted by the Seattle/King County Coalition on Homelessness found almost 9,000 people needed beds. Around 2,736 people were sleeping on the streets, in doorways or cars or tents or under trees or on the sidewalk. More than 6,000 spent that night in shelters or transitional housing. These numbers, of course, do not include everyone who doesn't have a bed; some people hide from people who want to count them. As low as these numbers are, though, they're up about 5 percent from last year.

Shelters cater to different populations: families, kids, women, single men. The St. Martin de Porres Shelter, where the guys we get come from, serves single men over the age of 50. Every night, 212 of them sleep there.

After my cohost and I set up the mats, we drive the van down to St. Martin de Porres to get the men. Outside the shelter, a bunch of guys are standing, smoking, waiting for their rides. Getting to go to an overflow church is good—they're smaller than shelters, quieter, boutique hotels by comparison, where maybe for a while you can feel a little less a part of a mob.

In the back room of St. Martin de Porres, a couple hundred mattresses are lined up on the floor. The mats are foam, a few inches thick, and covered in thick light-green plastic. They're only a few inches apart from each other in rows. There's a row flush against the wall and then a row in front of them and then a row in front of that all the way across the room to the other wall. Men and their stuff are all over the place, and there isn't much room to move. Some guys lie on their mats with their eyes closed, asleep or trying to be, or sit up reading or talking or just staring into space. I don't want to think about whatever it is they're thinking. Some of the guys aren't back here, though, but in the front room where the TV is. Tonight it's one of the Lord of the Rings movies, and everything is green and clean and pretty, and all the people are handsome and fit and have good teeth, and none of the guys are watching it.

I go up to the desk and say where we're from, and the guy behind the desk shouts out for the woman with the list. In a minute, she's there. She's short and strong and wearing a fuzzy gray rabbit-ear hat. She shouts the name of our church and heads outside with the list, and a bunch of guys follow her. She stands by the van and reads off the names of the guys who are coming to us. The list is written by hand in big block red-ink letters on a page torn from a notepad. This is not an iPad kind of place.

A couple of our guys hoist the bags of blankets into the back of the van, then everyone climbs in. After the guys sleep on them tonight, the blankets will get sent back to the shelter in the morning and get "burned," that is, cleaned really hard so the next guys who sleep beneath them won't get germs.

On the van ride, my cohost introduces herself and me ("my sidekick"). She's nice and direct and funny, and she's been volunteering at our church's winter shelter for more than 20 years. That's about when she and some other parishioners decided they wanted to do something practical about homelessness. Someone at church knew someone at St. Martin de Porres, so they partnered with them. A private donor pays about $10,000 a season for food, cleaning supplies, and gas; the church donates the gym.

When the guys arrive, we show them around—where the coffee is, the snack stuff, the TV. One time, when somebody spilled something and I got out the mop and started mopping, a guy I'd met there before and talked with a lot told me to stop. "We can clean up our own messes," he said and grabbed the mop from me. "You just relax. Fix yourself something to eat." He nodded at the sandwich stuff. "I mean it," he smirked, playing with me, and pointed very pointedly at the sandwich stuff. "All right, all right!" I laughed. He laughed too and went back to mopping. I made myself a sandwich and one for him, and when he finished with the mop, he sat down beside me. We ate our sandwiches together and we talked.

Some of the guys don't like to talk, but some of them do. One guy told me about when he repaired airplanes in the military but then he had to quit when he got injured, and then about his daughters' work—one teaches grade school, one's training for dental tech, and when they can afford it, they've promised to get him a house. One guy was reading The Secret and told me all about how "positive thinking" and "universal laws of attraction" can get you what you want and how he was moving to California because he thought he could find work. One guy knew a ton about film noir, and another one knew all about Watergate. One guy kept saying if he could just get the money for one night in a hotel with her, his ex-girlfriend might give him another chance. One guy kept taking cruddy old wilted plastic bags out of his pockets and talked about the other guys who relied on him to bring them what no one else ate.

The lights go out in the gym at 10 p.m. and the TV goes off at 11. Most everyone is asleep by then, but the rest of us say good night to each other, I'll see you in the morning.

The first night I slept there, I didn't sleep much. I lay in the dark and listened. I could hear some guys snoring through the walls, and the bus going by and the rain. I lay in the dark and thought a bunch about different places where I've slept. A million different rentals and apartments and houses when I was growing up, then dorms and apartments with friends then boyfriends and girlfriends. Group houses, summer sublets, hotels, apartments, trains. I've never once, not ever in my life, not had a safe and decent place to sleep.

We wake the guys up at 6 a.m. so they can have coffee and cereal before we drive them back downtown. The morning after the guy with the mop, he'd already started the coffee before I awoke.

There are only two bathrooms, and 16 of us, so pretty soon there's a line. The line moves pretty quickly, though, because there's only a toilet and a sink, no shower, in each. We stand in the clothes we slept in. The TV is on, and some vapid brunette and an overgrown smiling frat boy are making unfunny jokes and mispronouncing the names of foreign cities. There are weather reports and traffic reports and the sounds of coughing, the toilet flushing, a guy splashing water on his face. Sometimes there are toothbrushes and toothpaste the men can have, but sometimes there are not.

I love people when they wake up in the morning. I love peoples' eyes not yet quite focused and tender and soft and puffy-faced before they have to go out and face the day. I love people standing in front of the coffee pot spaced-out and staring or still half-asleep and trying to tell you what they dreamed and not making sense but telling you anyway.

Because the kitchen can't do much besides boil water, we pass out sack lunches for the guys to take for later. The lunches are made by different volunteers each night and might contain a sandwich, a gift certificate for coffee at McDonald's, a banana, a hard-boiled egg, a candy bar. One time, near Valentine's Day, somebody packed in homemade, heart-shaped, pink-frosted sugar cookies.

My cohost drives the guys downtown and the blankets back to the shelter. I stay behind to clean: I put away food and wipe down the counters and wash the kitchen and bathroom floors. I clean the toilets. I empty the garbage and sweep the gym. I roll up my pillow and sleeping bag and lock up and go home. I go to where I get to live with my alive and healthy spouse, who, by the time I get there, has left for work. We're both employed and own our house, which includes in it a bed I get to sleep in whenever I want.

Rebecca Brown is the author of a dozen books, most recently American Romances (City Lights). To donate time or money to the Seattle/King County Coalition on Homelessness, go to homelessinfo.org.

Comments 42
Tags: Features 25 Years of the Stranger
The Stranger depends on your continuing support to provide articles like this one. In return, we pledge our ongoing commitment to truthful, progressive journalism and serving our community. So if you’re able, please consider a small recurring contribution. Thank you—you are appreciated!
CONTRIBUTE NOW