Why Does Becoming a Mom Mean Potentially Losing Your Job? 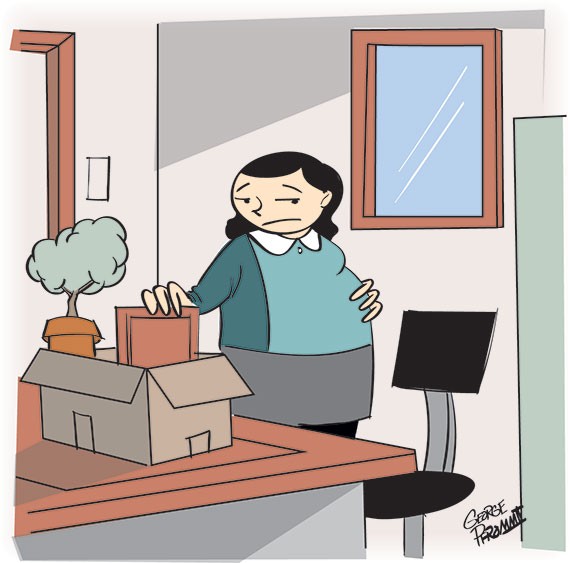 I can either stay home with my child or maintain my current career trajectory—and I'm one of the lucky ones because I get to actually make a choice. George Pfromm

My best friend from graduate school and I will both become first-time mothers this year. As a citizen of Ireland, my friend will be able to stay home with her baby for almost a year and then return to her present career path. As an American state employee, I can either stay home with my child or maintain my current career trajectory—and I'm one of the lucky ones because I get to actually make a choice.

Irish law includes a "maternity benefit" that pays 80 percent of wages to new mothers during the first 26 weeks after birth, and can begin two weeks before birth if needed. An additional 16 weeks of unpaid leave is optional. In the United States, the federal Family and Medical Leave Act requires that employers grant only 12 weeks of leave to new mothers, and payment of wages during this time is decided state by state. Only California, New Jersey, and Rhode Island offer paid leave; Washington State passed a law in 2007 requiring paid leave for new parents, but it hasn't gone into effect because it lacks funding.

If I don't want to leave my baby at three months of age to go back to work, I will give up my job in—ironically—global health and look for work again once my child goes to school. And to my knowledge, none of the places where I currently freelance, including The Stranger, offer paid maternity leave or anything beyond the federally mandated 12 weeks of unpaid time off. In a part of the country where global-health work is incredibly competitive and underfunded, I'll most likely be scraping the bottom of the barrel to get back into the workforce. But my Irish friend will be able to jump back into her field with the seniority and security she's built up over the last 10 years since we graduated and parted ways.

Numerous studies prove that women who receive paid maternity leave are more likely to return to their jobs, thereby remaining contributing, upwardly mobile members of the workforce, so why is the United States the sole industrialized country in the world that doesn't mandate some amount of paid leave? A recent University of Cambridge study draws direct correlations between the number of women holding board positions and levels of paid parental leave. Norway, Sweden, and Finland have the highest percentage of female board members. A commonality between these countries? Norway pays 100 percent of wages for 36 weeks of leave, and 80 percent for a 46-week period. Swedish parents are entitled to 480 days of paid parental leave, at 80 percent of their wages, which they can take any time until the child is 8 years old. And in Finland, mothers are paid for 105 working days at 70 percent of their wages.

So what's the problem, America? Is it our puritanical-born attitude that we become whole through work and self-sacrifice? Is it that by-the-bootstraps vision of the American dream that we are responsible for only ourselves? Is it the tendency to shout "socialism!" at government policies that divert public funds to individual social benefits?

"If you can't afford the time off to take care of your newborn, you shouldn't have had the kid in the first place," wrote a commenter in response to an article by The Stranger's Heidi Groover earlier this year about paid parental leave for Seattle and King County employees. It's unfortunately a common attitude among detractors of parental-leave policy development: Why should people who don't have children pay for parents to take time off from work? The answer is simple: Gender equality in the workplace and the well-being of children are ingredients of a healthy society, just like education, social services, highways, roadways, water systems—all things that our tax dollars contribute to.

Granted, not everyone wants to stay home with a kid. It's not glamorous, restful, or anything close to a paid vacation. A friend who recently gave birth likened her maternity leave to "a POW camp with lack of physical mobility, sleep deprivation, and mind-numbing TV." Staying home with a baby severely limits the ability to regularly converse with other adults, to stimulate the intellect, to leave the house at will, and to take a poop without someone screaming for your attention. But the choice to stay at home shouldn't be dictated by financial or professional limitations. The effects on gender equality in the workplace, parent-child bonding, and the auxiliary benefits to children are too great. So how do we fix this?

In order to pass legislation for paid parental leave, American attitudes toward parenting and gender equity in the workforce will have to change. Women have been increasingly active in the American workforce since World War II, but the commonly accepted view of the American worker hasn't changed enough to give them equal footing in job-market competition. Women in the United States earn 77 cents to every dollar made by men, but women aren't less able to do the jobs where they earn lesser pay, just as men aren't less equipped than women to raise children.

Historically, two distinct members of the household took on parenting duties and breadwinning, but that's not the case anymore. Yet, in the words of UC Hastings law professor Joan Williams, "We still define the ideal worker as someone supported by a flow of family work from a spouse, support most women never receive." Williams's concept of "reconstructive feminism" holds that those inherent differences in the genders, both "real and imagined," actually create the problem we see reflected in the workforce when care of small children tears a parent away from the workforce, "because women are measured against unspoken and unacknowledged masculine norms." The role of the homemaker, the primary caregiver to children, is seen as a feminine role whether held by men or women, and the demands of that role are in direct opposition to the demands of a breadwinning wage earner.

Some American companies have taken notice of this and are starting to provide more realistic parental-leave policies to their employees. My neighbor, a longtime Microsoft employee, stayed home for two full months after the birth of his second child, and some of that time was paid. Facebook reportedly offers four months of paid leave to new mothers and has programs that subsidize child care. (Mother Jones pointed out in 2013 that the most generous parental-leave packages are all from tech companies.) So if the private sector is willing to shell out the dough for parental leave, maybe the US government won't be too far behind.

This story has been updated since it was originally published.

Comments 34
Tags: Features
The Stranger depends on your continuing support to provide articles like this one. In return, we pledge our ongoing commitment to truthful, progressive journalism and serving our community. So if you’re able, please consider a small recurring contribution. Thank you—you are appreciated!
CONTRIBUTE NOW