Here's What the Data Tell Us 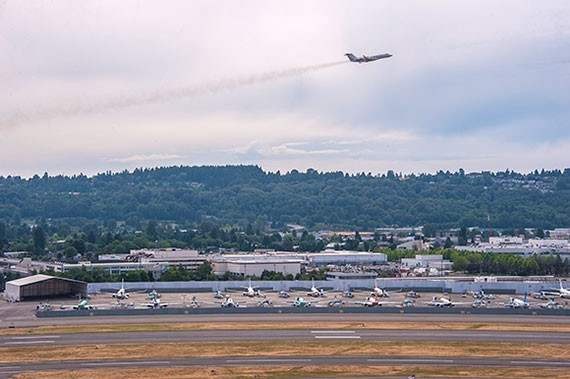 If we do nothing, the neighborhoods of South Park and Georgetown—including Boeing Field—will be flooding daily by 2104, according to scientific projections. Malcolm Smith

The environmental science I studied in college kept me up at night. As a journalist covering an enormous and mystifying Arctic oil-drilling rig sitting next to Elliott Bay years later, I'm now taking notes on how other people are thinking about climate change, talking about the future of energy production and global emissions, and making their voices heard in public, too.

Months of following the local, national, and international debate about the Arctic drilling fleet made me want to go back to the people who started the original conversation about burning fossil fuels, the people who've been warning us about the climate for years, the people whose opinions are checked by a very solid foundation in the facts: the scientists. The Pacific Northwest has some of the top climate scientists, public-utilities planners, and public-health researchers in the country. They've built up a body of knowledge larger than we've ever had before showing us the impacts—and adaptations we can use in response to those impacts—of human activity today.

Looking at an Arctic drilling rig and wondering about the effects of continuing to emit greenhouse gases at the going rate in this very moment and in coming years—something called the "business as usual" emissions scenario—I wanted to understand what the impacts of "business as usual" would look like on the ground in Seattle. I wanted to get the clearest picture I could by listening to experts about what would happen to Seattle 50 or 100 years out.

If we're talking about the future impacts of human activities that we're engaged in right this second, "We really start to see the effect of those decisions after the 2050s," says Lara Whitely Binder. She's an outreach and climate-adaptation specialist at the University of Washington's Climate Impacts Group (CIG). "Those are really influenced by the decisions we have or have not made in the last few years or the coming years," she says.

She agreed to help me tease out what the cost of doing little or nothing to limit global emissions today and in the future would look like during a typical Seattle summer in the 2050s. (I chose the decade.) Seven other climate scientists and public-health researchers agreed to help as well, and so did Seattle Public Utilities. (Also of help: the CIG's 130-page report "Climate Change Impacts and Adaptation in Washington State: Technical Summaries for Decision Makers" and the 271-page "Climate Change in the Northwest: Implications for Our Landscapes, Waters, and Communities.")

After talking with these scientists, it's pretty straightforward to see how a "business as usual" trajectory threatens snow in the mountains, the vast regional ecosystem that snow supports, and the very foundations of life in the sea. If the climate spirals out of control, Seattle may survive, but elements of the city's economic and cultural backbone—winter recreation, the salmon industry, the shellfish industry—could disintegrate.

In that kind of future, everything you think of when you think of Seattle might have to change. "At some point, it becomes transformative," Eric Salathé, a research scientist with the CIG and the US Department of the Interior Northwest Climate Science Center, tells me. "If Seattle's like Phoenix at some point, we can go along. But at some point, we alter our infrastructure so much that it changes our culture."

Other regions of the world won't have as much opportunity to adapt as Seattle does. Some may experience near-total destruction in the latter half of the century. "If you live in the Maldives or sub-Saharan Africa, it's a different story," Salathé says. "Some places won't be able to grow food."

That said, not all the local impacts of climate change will be negative for everyone. Some types of local industry stand to benefit from business as usual, at least in the short-term. As the Arctic melts, for example, industry may be watching the Seattle waterfront open up to new kinds of job growth. If global demand for fossil fuels keeps apace, Seattle could be poised to become a gateway to domestic oil and gas extraction in the Arctic like no other metropolis. And compared to any other place's summer, for example, Seattle's could still be the most beautiful by 2056. Summertime average temperature would hover around 80, and it'd be dry. People could access hiking trails earlier in the spring and later in the fall than ever before.

Then again, people might not want to go hiking out east. The presence of smoke from wildfires could make it hard to breathe, and wildfires and landslides could shut down some of the most popular trails anyway.

Smog could also get worse (though that would partly depend on the future popularity of electric vehicles), especially in the summer. It's likely that by the 2050s, most people in Seattle would decide they need air conditioners. Not everyone would be able to afford air conditioners, of course, which is why the city might have to do things like bus old people from the old folks' homes to the mall, one of the few air-conditioned public spaces in the city. That hypothetical was floated by Tania Busch Isaksen, a research scientist at the University of Washington's School of Public Health. There would be a serious medical justification for busing old people to the mall, too: Recent public-health research led by Busch Isaksen shows heat waves modeled under the high end of "business as usual" emissions killing and hospitalizing an increasing number of people in King County, particularly seniors and people with diabetes.

"The reason why that's important to us here in the Pacific Northwest is we live in a very temperate climate, and so we're not acclimated to these high temperatures," Busch Isaksen says. "So when we have a high heat event, it's a big deal."

Farmers in Yakima would have to get creative about conserving water in the 2050s, but even with new conservation efforts, they could still very well be struggling. The ones with newer claims to water in the state would get less than 70 percent of the water they normally use more than a third of the time, according to the peer-reviewed research of Julie Vano, a postdoctoral fellow and hydrologist at Oregon State University. In the 2070s, unless farmers undertake big adaptation changes, they'd be looking at the possibility of water shortages nearly four out of every five years.

Seattle Public Utilities managers have already been smart about saving drinking water, and they'll continue to carefully track wildfire data over the next several decades, says Paul Fleming, head of Seattle Public Utilities' Climate Resiliency Group. The possibility of a wildfire sneaking over the crest of the Cascade Mountains—which could happen in a more extreme climate-change scenario—and dumping ash or allowing runoff into the Cedar River Watershed, Seattle's unfiltered source of drinking water, could be problematic.

And skiing? Forget about most skiing. During a 2050s winter, snow would mostly fall as rain, and higher stream flows (coupled with erosion) could wash away salmon spawning nests. During the summer, more salmon would die off from the stress of lower stream flows and higher temperatures. Lower stream flows would also tax the Columbia River basin's hydropower system, and because of the air conditioners, paradoxically, the city would demand more of that power than ever. As a result, the city would perhaps have to buy more power, maybe from a coal plant.

The totality of the system would be stressed. And extreme events would collapse the system more and more often.

As the Antarctic ice shelf sloughs off, SPU's sea-level-rise projections show neighborhoods in South Park and Georgetown facing daily flooding by 2104. In the meantime, storms that sweep into the mountains on the Pineapple Express from Hawaii would turn severe, sometimes dumping six or more inches of rain over King County for 24 hours straight, says Salathé. (For all the clichés about how much it rains in Seattle, our rains are not intense like that.) The city is already planning for these future changes, but depending on the amount of time the city has to deal with them, the future rain floods could still overwhelm the drainage tunnel network underneath the city, gushing sewage and street junk into an increasingly polluted Puget Sound.

By that point, of course, the ocean would have absorbed many more decades' worth of increasing carbon emissions, acidifying the water. Oyster larvae wouldn't be able to form their shells. The state's formerly $270 million a year farmed-shellfish business would be a serious question mark.

But the debate has changed. Before world leaders meet in Paris this November to (hopefully, finally) sign a binding international climate treaty, they'll have to deal with a number of new arguments. One is whether keeping temperatures below the international community's famous ceiling—two degrees Celsius of global warming—can still be achieved (in May, the Guardian published a piece about an internal document reportedly showing that Shell, for instance, doesn't think it can). Another is whether politicians will still be able to organize climate action that isn't tied to that particular "two degrees" figure, or whether shorter-term geopolitical concerns, like the hunt for more unconventional fossil-fuel sources within the United States, stifle serious commitment.

And maybe international leaders will also start facing the premise of the controversial "keep it in the ground" argument. It's one that suggests tapping unconventional oil and gas from risky frontiers—like the Arctic—invites a future in which limiting global warming increasingly becomes impossible. Easy-to-access oil and gas will be burned first, obviously—as a Nature article earlier this year affirmed, based on earlier research showing that more fossil fuels in the ground than can be burned responsibly already exist. But that same study also showed that a future scenario in which the expensive, difficult-to-access stuff is being burned—like oil from the Arctic—is one that has effectively given up on limiting global warming below two degrees Celsius.

The scientists I spoke to also emphasized what they don't know. There's still so much we're only beginning to understand about the cost of unprecedented changes to public health, to our social fabric, to our own psychological well-being. "The whole economic discussion typically omits the social cost of carbon," says Philip Mote, director of the Oregon Climate Change Research Institute. "That is, what are the costs to society, globally, and to the environment of not doing anything? We tend to say, 'Well, we'll invest this amount of money in this energy source and it'll pay off,' but what are the costs of flooding some low-lying island nation? Or having a heat wave in India?"

We don't have all that information yet. But we do have—have had—more than enough to make decisions now.

Comments 76
Tags: Features
The Stranger depends on your continuing support to provide articles like this one. In return, we pledge our ongoing commitment to truthful, progressive journalism and serving our community. So if you’re able, please consider a small recurring contribution. Thank you—you are appreciated!
CONTRIBUTE NOW