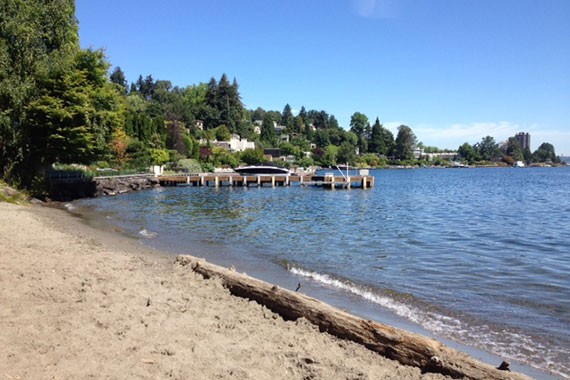 Seattle has 149 secret beaches. They sit at the ends of public roads and dirt paths and seemingly private driveways. Nearby, razor wire and security cameras guard expensive private properties that have tennis courts, groomed gardens, guesthouses, and long docks. These beaches are tiny crevices of public space, little known and offering the average citizen a chance to quietly take in the view of a multimillionaire without the fear of being evicted.

They exist (and are being improved) thanks to a 1996 city-council resolution that goes something like this: Wherever a public street dead-ends at water in Seattle, the space between that dead end and the water is public property. Your property!

On a recent weekday morning, pursuant to this resolution, an apartment-dwelling companion and I set out to survey some of our waterfront property. A few blocks south from Lake Washington's often-crowded Madison Park Beach, we located the final stretches of East Lee Street. This street reaches its eastern conclusion on a block of large homes with strong fences, and beyond the street's dead end, through the crisscrossing trunks of a tall bush, watery light and a glimpse of the lake beckoned. Walking around the bush, we found two young women on blankets, the water lapping gently in front of them as they stared out at a view of the Bellevue high-rises peeking up above the trees on the other side of Lake Washington. Perhaps wanting to remain the only ones there, the two women helpfully referred us to another secret beach—one so secret that it was talked about in their high school as, simply, "Secret Beach"—that sits a little farther south.

We decided to search for their "Secret Beach" but first stopped off at the dead end on nearby East Highland Drive, a rocky public shore that's only about 30 feet wide. To get there, we walked down a long driveway that seemed to be private but—city signs reminded us—wasn't. Then we followed a dirt path through blackberry bushes and—presto— quiet waterfront with rowers sculling past.

We'd found out about these two street-end beaches thanks to a handy map called "Seattle's Shoreline Street Ends" that the city has posted online. It ranks street-end beaches along Puget Sound, Lake Union, and Lake Washington as "worth a visit," "not yet ready for visitors," and "no public access." (With beaches in the latter two categories being improved as city money becomes available.) The first two beaches we visited were both ranked "worth a visit"—and rightly so—as was the third. It sits at the end of East Prospect Street and has the most interesting approach of them all. To get to this beach, you walk alongside the razor-wire-topped northern fence of the exclusive Seattle Tennis Club and then arrive at a public bench placed on a rocky shore with a perfect view of Mount Rainier to the south. (This view also includes 10 or so feet of non-razor-wired Seattle Tennis Club fence that extends into Lake Washington for good measure, but never mind that.) Around this time, we also noticed that all of these street-end beaches lack something significant: bathrooms. One of us may have peed in the bushes along the Seattle Tennis Club fence as a result. Plan ahead!

Next, the "Secret Beach." We found its entrance on 39th Avenue East, just north of Denny Blaine Park. It's guarded by a tall pole with several security cameras affixed to it, and at the time we arrived, a well-tanned woman was leaving and getting into her Range Rover. (Public beaches: They're for everyone!) This was by far the nicest of the street-end beaches along this stretch of Lake Washington, with a thoughtfully placed wooden bench, a stretch of grass for lying on, a sandy—rather than rocky—shore, and some lovely trees for casting shade at the right hour. We found only one other person there, surrounded by silence.

It was approaching lunchtime, so we changed gears and headed for a secret park—as opposed to a secret beach—that was in a neighborhood that seemed likely to have a sandwich: Queen Anne. The park we were looking for is "secret" according to Linnea Westerlind, who runs the amazing website Year of Seattle Parks, which chronicles how Westerlind set out to visit every single public park in Seattle in one year and ended up doing it—in four. "Certainly, every park didn't leave me amazed," Westerlind writes. But she developed a particular fascination with what she calls the city's "secret parks," which she devotes a section of her website to.

Some of them are street-end beaches like the ones we'd visited, but a number of them are tiny landlocked public parks that most people—even those who've lived their entire lives in Seattle—could easily miss if they didn't turn down the right streets in the right order. For example, Queen Anne's Bhy Kracke Park (at the end of Comstock Place), which has an evocative name that traces back to a surprising source: a man named Werner H. Kracke. He lived on property that is now the park and he liked the old-timey phrase "By cracky!" so much that it became his nickname, though he spelled his nickname in a special way: "Bhy Kracke." True story.

Anyway, Bhy Kracke Park is a wonderful little park with three parking spots, four benches, a little grassy lawn, and an epic view of South Lake Union. All around there are enviable homes, and down a switchback trail through blackberry bushes, some even-more-secret plots of grass and, if you take the right fork in the switchback trail, Lower Bhy Kracke Park, which has a nice picnic shelter and a working water fountain (but still no public bathroom, the marker of a park the city actually wants you to linger in).

Later on in the day, feeling that our morning had lacked a secret glimpse of water on the western side of the city, we drove to Andover Place (4000 Beach Dr SW), one of the secret parks Westerlind discovered in West Seattle. It can be found down a gravel path that leads between two waterfront homes—follow the smell of saltwater and the sound of seagulls. Once on the beach, we saw people out on their private patios eating dinner as waves splashed against tall private breakwaters and the sun set over the Olympics. We didn't have a dinner with us to eat, or a table to sit at, but we had the view, and even though 10 feet away the story would have been different, here on this little stretch of beach, we owned it all.