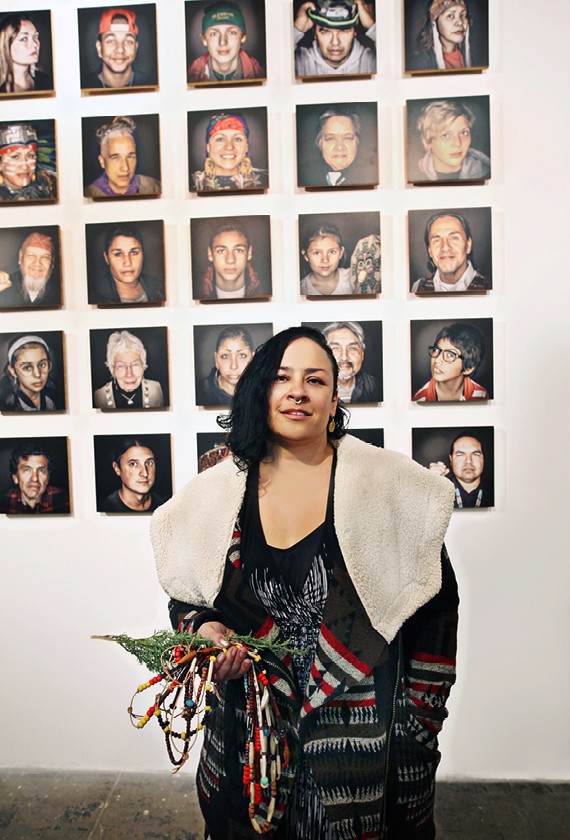 "Art is not separate from life for many indigenous people. It's as essential as food and water in many ways," says Tracy Rector. She's discussing You Are on Indigenous Land, a group show she both curated and participated in, collaborating with photographer Melissa Ponder as in·dig·e·nize to create a large collection of portraits.

"The in·dig·e·nize project was born after I was asked to contribute art to events related to Indigenous Peoples' Day in 2015. Melissa and I wanted to shoot 365 portraits—one person for each day of the year. Now we hope to continue and are flirting with being able to complete 1,001 portraits of modern indigenous people."

If anyone is going to complete such a large project it’s Tracy. As co-founder and executive director of Longhouse Media, Tracy’s other work has been featured, among other places, in the Cannes Film Festival, on National Geographic’s All Roads Film Project, and at the Smithsonian Museum of the American Indian.

“Native art isn’t just leathers and feathers as stereotypes would lead the public to believe.” says Tracy “And Native history is everyone’s history on this land called now the United States of America.”


You Are on Indigenous Land will be at CORE Gallery through January 30. Continuing events include in-gallery residencies by artist/weaver Joe 'wahalatsu?' Seymour and Tlingit tattoo artist Nahaan, who will host an indigenous tattoo revival on Friday, January 22. There's also readings and poetry by local indigenous writers Storme Webber and Sara Marie Ortiz on Sunday, January 17th.


Tags: Features Person of Interest
The Stranger depends on your continuing support to provide articles like this one. In return, we pledge our ongoing commitment to truthful, progressive journalism and serving our community. So if you’re able, please consider a small recurring contribution. Thank you—you are appreciated!
CONTRIBUTE NOW