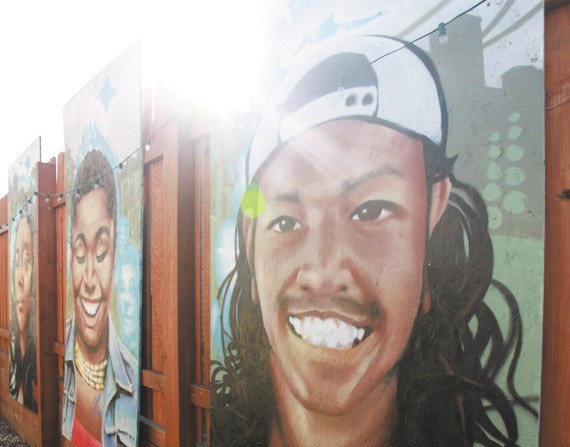 The Station is the heart of Seattle’s underground hiphop scene. Kelly O
Back to article

1
That safeway is a fucking shithole that preys on our foodstamp program with higher prices and seconds (old produce and dented cans)
meks on January 26, 2016 at 10:49 PM Report this

3
edit: 'black people'
ctmcmull on January 27, 2016 at 7:19 AM Report this
4
The Pinehurst neighborhood in Seattle (between Northgate and Lake City) is popular amongst first and second generation African immigrants. I would imagine this is due to the area having one of the few mosques in Seattle and an Eritrean church. A fair amount of food from that part of the world (both cooked and in grocery stores) as well as hair salons for those with curly hair can be found. But yeah, it is still mostly white (just a little more mixed than most of Seattle).
Ross on January 27, 2016 at 12:03 PM Report this
5
Not just cricket, but Samoan cricket, kilikiti, which means teams of unlimited size. Watching them change ends, 30 or 40 players running back and forth after each over, is pretty awe-inspiring.
Fnarf on January 27, 2016 at 1:28 PM Report this

6
Jeez, you make Seattle sound like a Klan rally, Charles. Portland, Denver, and Salt Lake are all whiter. By about 5 percentage points.

Max Solomon on January 27, 2016 at 4:03 PM Report this
7
Pray tell, the official censor from Zimbabwe will once again tell us how white Seattle is without explaining why there are so many black thugs in the city?

I mean, there's been an epidemic over the past twenty years of them pouring in here, yet we are told otherwise --- could it have something to do with Locke and Gregoire signing that Interstate Compact, bringing three out of every four ex-cons to this area? A subject no "reporter" at Der Stranger will ever touch?

America maybe, but future of South seattle is more likely to be more like the central district, or an expanded Columbia city. If we're getting whiter, how can north Seattle be any whiter?
Sgt freedompants on January 27, 2016 at 4:35 PM Report this
10
WTF Roxbury Lanes is the cracka asses cracka place i've been since i moved back to the PNW
ICwater on January 27, 2016 at 4:35 PM Report this

12
but since you'll have to walk thru the gentrifying Central District to get to Wonder or Lake Chad, why bother? Both of the buildings that contain those businesses displaced people of color, so you're supporting the white gestapo by doing so.
wilbur@work on January 27, 2016 at 6:39 PM Report this

13
Meks dear, are you sure you're not thinking of the Safeway on South Othello (which really is a dreadful place)? The Rainier Avenue Safeways really aren't that bad - nor are they seeing the white flight that Charles rhapsodizes over. Not everyone shops at the PCC. Personally, I think it's rather a ridiculous place.
Catalina Vel-DuRay on January 27, 2016 at 7:11 PM Report this
14
Or, you could just move to Tacoma.
Rad75 on January 27, 2016 at 7:42 PM Report this

15
@7, I'm used to the word "thugs" only being used by racists anymore, as one of their favorite dog whistles. I guess you missed the memo since you made your racism explicit by preceding the word with "black".
long-time reader on January 27, 2016 at 8:20 PM Report this

16
It's undoubtedly because of my advanced age, but when I hear the word "Thug", I think of people like this......

http://1.bp.blogspot.com/-UfdiwyuZ9wE/To…
Catalina Vel-DuRay on January 27, 2016 at 8:40 PM Report this
17
The Westfield Mall in Tukwila and Tukwila in general is ghetto like pre gentrified bed stuy with more sprawl, less public transportation, no jerk cuisine and a sprinkle of white people. Pretty vacant in culture and art. The African American Museum is certainly cool for culture as well as that Georgetown Bar--Georgetown is Capitol Hill of 25 years ago w/ fewer apartments and more pollution. New Blacks should check out #BlackinSeattle on twitter for a bit of the pulse of fellow resident blacks as well as the local #BLM collective.
neo-realist on January 27, 2016 at 9:29 PM Report this
19
Mudede left out quite a few places where there are African American populations (though the East and West African populations may be more recognizable).

Mountlake Terrace, Shoreline, Bremerton, Lynnwood, and (clinging, but still there) Everett have noticeable African American populations. Even Kirkland has a few disjointed scattered populations of African Americans. If you are black and do not want to be totally surrounded by people who clinch their purses, check their wallets, or run back to their cars when they see you in fear you will steal it, you can still find that in a few of those regions.

Kitsap and the north end of Seattles metro are not known for their black cultural centers outside of a few areas with decades old African American populations (pretty much Lynnwood, Bremerton and Everett and thats it). That being said, their is a community there. It isnt concentrated like in the south end, but as a whole if you are an African American, you will get the 'acknowledging head nod' regularly from other African Americans at grocery stores, bars, pharmacies, malls (Alderwood, Everett and Kitsap), community college campuses, eateries and even places as benign as bus stops.

The people that live in these 'extended regions' of Seattle across the water or way-the-fuck-out-there do so because many realize that Seattle is not the progressive utopia it sells itself as. As BLM speakers recently put it at a speaking event in Seattle, Seattle is a " white progressive utopia is that black people [...] are still brutalized, but now it’s even worse because someone will tell you they love you while sticking their foot in your face."

sgt_doom on January 28, 2016 at 10:26 AM Report this
25
I would have to highly disagree with this article! Seattle has people of color all over it. Im speaking inside the Seattle city limits as well. And not only that but Seattle also has the 3rd highest East African population in the nation behind Minneapolis Minnesota in Washington DC. Is there alot of White people here? Yes, but it is because of the tech boom and they keep moving up here from California! But still Seattle has 67% White and the Other 33% is people of color forwhich still makes for a lovely utopia of a wonderful rainbow.

ONLY1WIZER
"Seattle Watch Me"
ONLY1WIZER on January 28, 2016 at 1:06 PM Report this
26
Africa Town , Umoja fest. Pratt Park. Seatac YMCA . Burien Library. 12th and Jackson. 88 Keys . The Royal Esquire Club. Tabernacle Missionary Baptist.
Heather01010 on January 28, 2016 at 10:28 PM Report this
27
Not sure if I missed something but I wouldn't necessarily categorize The Blu Grouse as a "black bar" or a night club...The grouse is one of my favourite spots/once neighbour (before gentrification struck) and to my recollection I've only ever met one black person there. That's not to say the grouse isn't a wonderful, welcoming spot, totally deserving of recognition. I just don't know if this write up paints an accurate portrayal of the scene there.
Flora Fauna on January 29, 2016 at 4:54 PM Report this