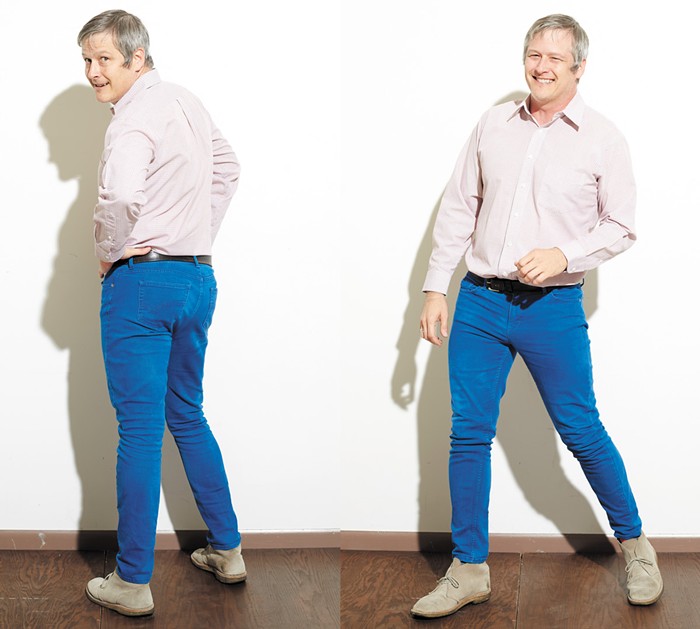 Stranger employees come and go, but only one has outlasted (and antagonized) them all: Mike Nipper, who started working here in 1994 and simply never left. In many ways, The Stranger never could have reached its silver anniversary without Nipper, whose flair for back-sass predates most civilized standards of decency. But in other ways, would we even want to, y'know?

In preparing this issue, we realized that we'd spent so much time skulking past Nipper's desk hoping he didn't clown us that we never really took the time to find out what really makes him tick. Then we thought about it a little more and realized that neither he nor anyone else would be interested in that particular conversation, so we cooked up this modified Proust questionnaire for him. Ladies and gentlemen and nonbinary humans, meet Mike Nipper, the true life and soul of The Stranger:

How long have you been the Stranger's receptionist?

How long did you expect to have the job when you started?

I had intended to go to grad school eventually, so it was just a basic hand-to-mouth sitch till I got into the UW. BUT LOOK AT ME NOW... I'm still here and still hand-to-mouth!

What is the trait you most deplore in people who call the paper?

Presumption. Most folks who call or show up with story ideas don't understand the steps the editorial department must take to shake out the narrative and steps which must be taken to avoid legal hassles, or they get upset when they find out no one except for them cares about their lack of parking or the truth behind Black Lives Matter. Oh, and the very important people who work for marketing agencies or arrogant dumb fucks who lucked into a pot-shop license are always fun on the phone.

What is the trait you most deplore in people who work for the paper?

Which Stranger staffer do you most admire?

Dale Yarger. He was an angel. RIP.

How much money would you estimate you've spent on records in the time you've worked here?

Estimate? ALL OF IT. And whatever I can punt onto my credit card.

What's the most disgusting piece of mail you've ever received at work?

What are some of the best nicknames you've made up for staffers?

Has a staffer ever objected to a nickname you've given them?

It's always been more of an issue if they did NOT get a nickname.

Things were WAY looser and more cheeky way back. And shit could get weird, like really weird. Remember, William Steven Humphrey™ once worked in The Stranger office, you know. WTF. His red hair was all over the place.

How gay is Dan Savage, really?

He matches his little precious butch-ass outfits to the color of his fucking bicycle. Speaking of his bike, it's such a gay bike it doesn't even have a seat. Jeeez, SO GAY!

Have you ever had sex at The Stranger offices?

DUH. Um, in the building, but NOT exactly in the office.

Do you know if anyone else has?

FUCK YEAH they have, so I know better than to sit on ANY couch in this motherfucker. "That ain't doughnut, that's nut DOUGH!" Fortunately, none are currently employed here. EXCEPT FOR SAVAGE. He has dragged his sack across everything in this office. Him and former staffer Counter, who tried to "scent" mark most of the office as his.

You're Southern. Has anyone ever had trouble understanding your accent on the phone?

Unless they're rural Canucks, they all seem to be surprised I'm Southern. Really, no one hears it, unless I say "orange" or "lawyer" or when I complain about the shitty Seattle BBQ and dodgy long-cut coleslaw.

What's your protocol when a stalker comes to the office looking for a writer: Contact the cops right away? Or is it like fishing, and you play with them a little to see just how scary they really are?

Is it true that you and Stranger music critic Dave Segal can now speak exclusively in record label catalog numbers?

Yes. And duh. We're not even verbal anymore; we blink to speak or just use our record-nerd knowingness.

If you had a gun to your head, what would you say are the three best singles ever pressed to vinyl?

GAH!! I DUNNO!!! This question has sent me into an anxiety attack!!

Hey, hang on a second: Have you ever had a gun to your head? Was there ever any violence at the entrance to The Stranger offices?

No gun, but I have dealt with the violent actions of some delusional jerks. Sometimes from people who didn't even work here.

You're famous for starting the tight, straight-leg, high-water pastel trouser craze when Seattle was all about saggy, baggy denim and rocker wear. Does it ever make you sad that your signature look became so popular?

Nope. I'm not sad about it, as I can find them off the peg and in my size rather than having to have ALL my britches tailored. Whatever, I still look better than all the wannabes.

What's the most important thing you've learned during your tenure?

Comments 6
Tags: Features Person of Interest
The Stranger depends on your continuing support to provide articles like this one. In return, we pledge our ongoing commitment to truthful, progressive journalism and serving our community. So if you’re able, please consider a small recurring contribution. Thank you—you are appreciated!
CONTRIBUTE NOW