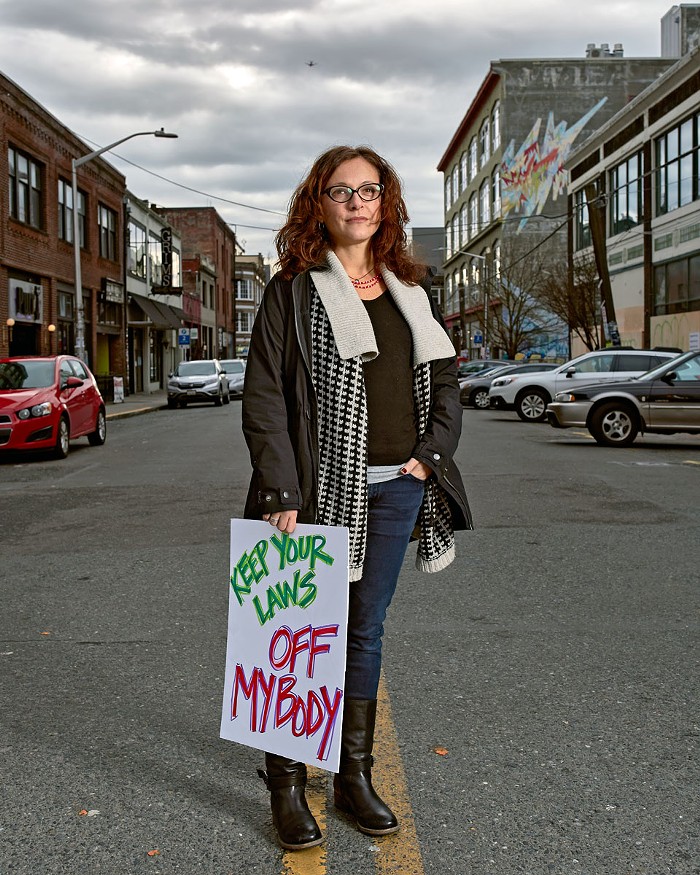 Stanton Stephens
Although she's long been involved with Seattle's social organizing community, Palmira Figueroa doesn't consider herself an activist. By day, she serves as the development director for environmental sustainability nonprofit Stewardship Partners. Outside of work, Figueroa is "a fighter for social justice." Most recently, she helped chair the Womxn's March on Seattle, which led about 175,000 people from Judkins Park to Seattle Center this past Saturday, January 21. The march is now the largest protest in Seattle history.

Although Figueroa considers the march a victory, she knows her work in social organizing is not yet over. "I am aware of the injustice in the world and want to be an agent of change," she said. "I want to leave a better world than the one I found, a better world for our indigenous people, women, Muslims, immigrants, queer [people], our Mother Earth—a better world for the children."

You helped organize the Womxn's March on Seattle, now recognized as the largest march in the city's history. How does that make you feel?

[It was] the most amazing day of resistance, solidarity, and connection!

Your work with Stewardship Partners focuses on climate justice and sustainability. What is the biggest misconception?

We live in a world where people live more years depending on the color of their skin, because the darker you are, the most likely you live near harming substances or pollution, or that you are exposed to chemicals that will harm you and affect your health and the health of your children. When we are able to look at the environment as a whole, including the people as part of it, we can talk about climate justice.

Some marchers expressed frustration that the demonstration still centered on white women. How can we make social movements more intersectional?

As people of color and minorities, it's very hard to forgive white people because they didn't stand up before. My perspective is that this needs to be a time of healing, a time of patience and compassion from both sides. For the people just standing up, this isn't just about them. This needs to be intersectional. The struggles of people of color, of queer and gay people, are much bigger than pussy hats.

What are you most worried about under the Trump administration?

I love Le Pichet. My husband and I go for a date sometimes when the kids allow us! We eat the most amazing chicken terrine. It is so smooth [that] I think it must have drugs in the recipe.

Do you have a go-to karaoke song?

I am originally from Mexico, and my go-to songs are mariachi songs. Juan Gabriel is a favorite, a wonderful writer-singer with a very dramatic life. He was gay in a very macho society. "Te Voy a Olvidar" is one of my favorites.

I listen to all types of music, but I've been inspired by strong women's music lately, [like] Beyoncé, Shakira, and Des'ree.

What other Seattle organizations are doing amazing work?

I used to work for Casa Latina and I loved it. I really like what Puget Sound Sage, Refugee Women's Alliance, and Children's Alliance [are doing].

I think that in general, the U.S. has a very entitled population, too much complaining about everything. One of the worst for me, [having come] from Mexico City 15 years ago, is when I am on public transportation and people complain because it is too full or uncomfortable. Comfort among white people is overrated. People here need to be “comfortable” all the time.

If you could fix one thing about Seattle, what would it be?

I would bring more sun, but I think at this time in the world, I would take Seattle out of the US map so Donald Trump was not our president.