One of the Drag Artists Turning the Scene onto Its Head 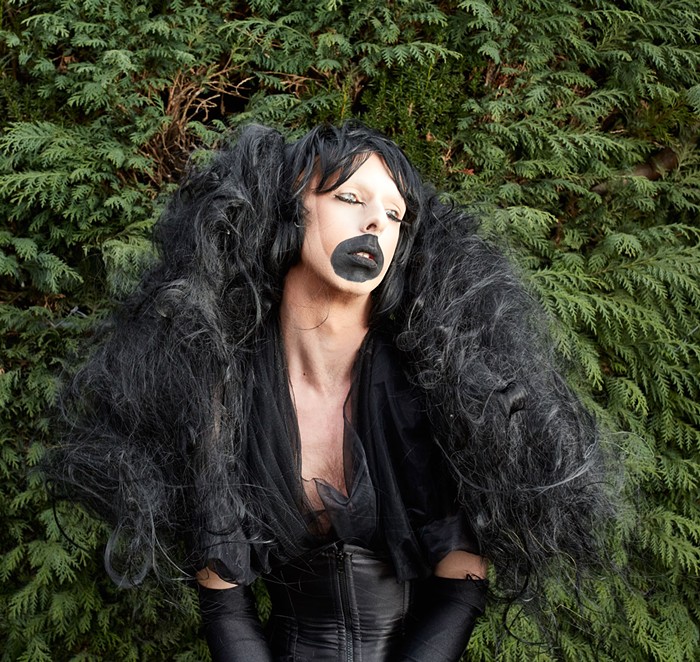 Drag artist Arson Nicki is renowned for their nontraditional getups: They proudly display their bare, flat chest and wear black makeup painted around their mouth and ski masks in lieu of well-coiffed wigs, transforming them into more of a creature than your typical, glamorous queen. Rather than curating pretty, pageant-style drag shows, Arson Nicki prefers to create unsettling displays. "There is something very wrong and 'off' with the way Arson moves in performance that sets me apart from reading as fully human," they said. Although there's no single term that can describe what Arson Nicki does, their friends have classified their performance as "post-drag" or "alt-drag," for a lack of better terms.

Arson Nicki is pioneering a new kind of drag in the Emerald City, but they still remember their humble origins. They first performed in drag in university during their senior thesis production of Hedwig and the Angry Inch at the University of Washington in 2015. "Every drag performer I know has their taste of the art that hooks them," Arson Nicki said. "That show was mine, and I haven't looked back since."

Today, Arson Nicki is the host of the Timbre Room's avant-garde Rapture party, held every second Saturday, and the Möbius Sisters' dark techno performances at the Eagle every first Friday. Up next for Seattle's self-described "aggressively transgressive" drag star: producing four art shows for the 2017 Seattle Fringe Festival. Lately, Arson Nicki is experimenting with "art in extremes," which has so far included performing a seven-hour-long lip sync and wearing a plastic dress that engulfed the stage. Clearly, there's no telling what they'll do next.

What do people misunderstand about drag performance? Is there anything that comes off as deceptively easy that's actually frustratingly difficult?

Drag queens traditionally perform lip sync as their main performance medium. To me, a strong lip sync is not just about moving your lips correctly and looking gorgeous. It has a beginning, middle, and end; it's peppered with stunts (reveals, death drops, gags, surprises, etc.); it incorporates improvisation with audience interactions and accepting tips; it brings a message or thesis statement to the table; and all of that usually has to happen within three or four minutes in front of drunk queer people at 11 p.m. on a weekend night. None of that is easy.

What excites you most about Seattle's drag scene? How is it unique from other cities'?

Two things: First, there is a still-relatively-untapped market for unusual drag queens like me. Second, Seattle's drag scene is currently experiencing a coming together of sorts that isn't happening anywhere else. Drag artists across genres and from all kinds of home bars are recognizing and appreciating the unique artistic qualities we all bring to the table. Bookers and bar owners are starting to wise up to all of this and book performers accordingly.

What's your favorite song to perform to?

"Gimme All Your Love" by Alabama Shakes. That song has slayed at Kremwerk, Annex Theatre, Neumos, R Place, and on tour. It has structure and plays with sonic extremes, which makes my job much easier.

My "getting into face" music is always about Sigur Rós, FKA twigs, LCD Soundsystem, James Blake, and Beyoncé. I also have a playlist with songs that I am planning on doing in the future that I need to learn—right now that playlist has the Cranberries, Fiona Apple, and Circa Survive on it.

My friend and mentor Cucci Binaca has said that Butylene O'Kipple is the most underrated drag artist in Seattle. I agree with that assessment.

Where would you recommend young LGBTQ people go in the city to find a community?

Unfortunately, we still live in a world where the answer to that question depends on your age. If you're 21-plus, you can't go wrong with going out to a bar that suits your tastes in aesthetics and clientele. Gay men especially will often proudly proclaim that they are "non-scene" (aka they don't "do" bars), but the reality is that you won't find consistently and reliably large regular gatherings of queer folks in person outside of bars, at least not today. Pony, Kremwerk/Timbre Room, and the Eagle are my personal usual suspects, but everyone has their own corner of the universe that works for them.

(Side note: It is perfectly acceptable to go to these places and not drink if that is something you are able to do. I have been sober for nearly two years and it has never been a problem.)

As someone who grew up in Seattle, I speak from experience when I say being under 21 as a queer person can be isolating. Neighbours currently has their 18-plus shows every Wednesday, which is an important event to the community, but my best bet was seeking out youth-oriented programs like Vera Project to hopefully run into some young queer people to befriend. Seattle needs to do better on this, and it starts by asking queer youth about their needs and actually listening to them.

I don't want to live in a world where Beth's Cafe in the Green Lake area is closed. I'm boring and order the ham scramble every time, and maybe the Six-Fiddy Shake if I'm feeling adventurous. There are other options for people who want a more creative culinary experience, and the place is open 24 hours a day.

Traffic. Don't act surprised when nobody can drive in the rain because everybody who lives here is from elsewhere/California. Also, skip the car and take a bike or public transportation more often if you are able-bodied and there is a route available to you.

Rent prices. High rents cause net harm. I have yet to see any arguments that come close to persuading me otherwise.

Civic Technology Advocate for the City of Seattle