This black lab is one of SPD’s best tools for finding hidden thumb drives. 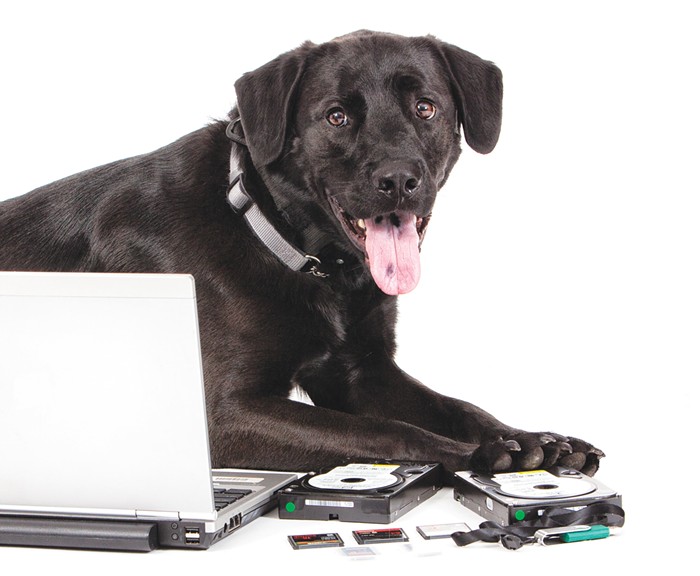 Before moving to Seattle, Bear used his nose to find child pornography inside the home of Jared Fogle, the former Subway spokesperson.

In 2014, Indiana firefighter Todd Jordan got a call from a distraught couple with a young dog. The couple's nearly 2-year-old black Lab, Connor, was jumping up on countertops and eating all their food. He wouldn't stop.

"[The woman] said, 'I love the dog, but it's just too out of control for us,'" Jordan recalls. He was used to getting these types of calls, having rescued multiple unwanted pups from the pound in order to train them to sniff out accelerants involved with arson. The woman asked if Jordan wanted a new dog for that purpose.

Jordan had another idea. A few months earlier, he had been talking to friends on the Internet Crimes Against Children Task Force, who told him they were often frustrated when serving warrants on child-pornography charges. The officers said they sometimes missed thumb drives and micro SD cards—storage devices the size of a fingernail—that had been hidden in cracks in the walls. They asked if Jordan might be able to train a dog to find these things.

At that point, there was only one other place in the country that had started training dogs to detect electronic-storage devices. A chemist working with Connecticut state troopers had demonstrated that dogs really could sniff out thumb drives.

So Jordan decided to give it a shot. He adopted the black Lab and renamed him Bear—after Pedobear, a meme that originated on 4chan but came to be known as shorthand for child molestation.

Then Jordan started training Bear in his own house.

Today, Bear may be the most famous electronic-storage-device-detection dog in the country. He used his nose to find child pornography inside the home of Jared Fogle, the former Subway spokesperson. Now Bear works at the Seattle Police Department, where he continues to conduct searches for thumb drives and SD cards on local warrants.

Electronics-sniffing dogs are a relatively new phenomenon. Mark Linhard, a K9 trainer and former Connecticut state trooper who worked with the first electronics sniffers in the country, says he was skeptical that dogs would be able to imprint on something as small as a micro SD card. But after teaming up with chemist Dr. Jack Hubball in 2011, Linhard discovered that electronics storage devices did indeed carry their own unique scents—and that dogs could detect them.

Dogs that are hyper and primarily motivated by food make particularly good electronics sniffers, Linhard says. Dogs have more olfactory receptors than humans, and a bigger portion of their brain is built for processing those intakes. "When we evaluate a dog, we're looking for a dog that obviously has a high food drive, who will basically put himself in harm's way to get to food," he says. "That is more than half the battle. If the dog doesn't have that internal rewards system, it's hard. When you have a dog that's ready to rock, you know it."

After reading about the anecdotal success in Connecticut, Jordan did some experimenting of his own. He was no chemist, but he did know dogs. In order to simulate an official search, he started messing up corners of his garage, hiding USB drives under piles of junk for Bear to find.

Bear was a natural.

After months of training, Bear and Jordan started to accompany detectives on warrant searches, where Bear would find thumb drives that human searchers would miss. But Bear and Jordan's biggest test came in July of 2015, when detectives called up Jordan one night and told him to meet them with Bear in a church parking lot early the next morning.

When Jordan got to the parking lot, he saw what he calls law enforcement "alphabet soup": FBI, local agencies, and the US Postal Service strapping on bulletproof vests. He didn't know at the time who the search warrant was going to, but soon learned it would be delivered at the home of Jared Fogle, the Subway guy.

Jordan was nervous. Dogs are fallible, after all, and so are humans. He tried to calm his nerves.

"They teach human handlers that what goes up the leash, goes down the leash," Jordan says. "If you get mad, they feel what you're feeling. So I knew that if I was nervous, the dog is not going to perform. I had to suck up the nerves and do my best at that point."

Eventually, detectives made it inside Fogle's home with Bear, who went into Fogle's office and indicated—meaning stopped and sat—in front of three spots in the room. He was trained, too, to use his nose to point to the source of the scent.

Jordan isn't a detective—he's a firefighter and a dog trainer. He had no idea what Bear had found until a month later, when attorneys filed child-pornography distribution and possession charges against Fogle. Bear had detected a thumb drive that humans had missed.

Today, some researchers have published papers showing scientific support for what Jordan and Bear learned intuitively. Dr. Lauryn DeGreeff, a research chemist at the US Naval Research Academy, published a study last year showing that micro SD cards and USB drives have scented compounds that are different from other kinds of electronics.

Dogs are capable of detecting multiple compounds at once and recognizing scent profiles in different contexts. So today, when Jordan trains electronics-sniffing canines, he tries to throw them off in realistic ways.

Jared Fogle isn't the only high-profile case Bear has worked on. He also played a role in the arrest of Marvin Sharp, the USA Gymnastics coach who was also charged with possessing child pornography.

Jordan sold Bear to Seattle police for $9,500 in 2015. Jordan's wife cried that day. Even though they're "tools," the dogs are also very much companions and family pets, Jordan says.

"Bear is my special guy, because he was the first one," Jordan says. "So giving him to [SPD detective Ian Polhemus], that was tough."

Comments 10
Tags: Features
The Stranger depends on your continuing support to provide articles like this one. In return, we pledge our ongoing commitment to truthful, progressive journalism and serving our community. So if you’re able, please consider a small recurring contribution. Thank you—you are appreciated!
CONTRIBUTE NOW