What Happens If Your Pooch Eats Your Stash? 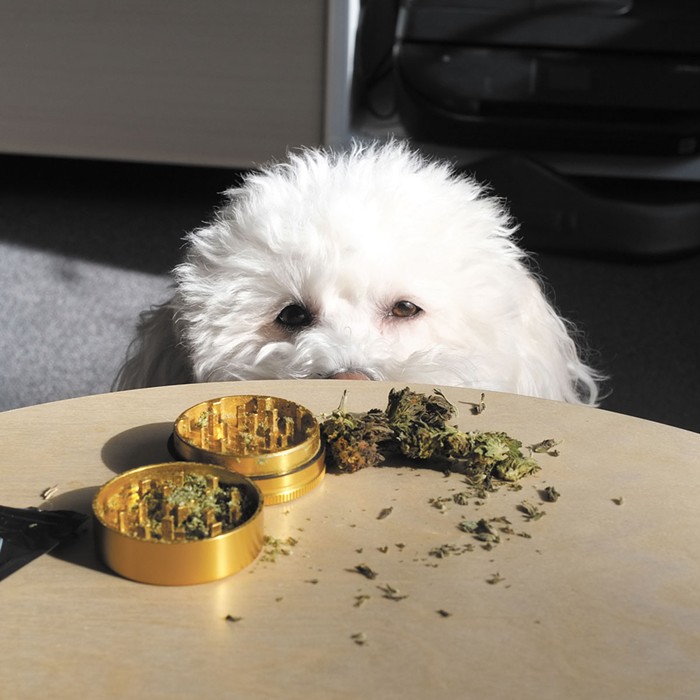 Yogurt was just a kid when she tried weed for the first time.

Now a full-grown adult with wiry gray hair and a serious underbite, the first time she ate weed, she wasn't even old enough to walk herself to the park, much less purchase a joint. This, perhaps, is why she stole her owner's stash off a coffee table when they weren't looking.

"It was kind of a lot," says Yogurt's owner, who asked to remain nameless just in case PETA gets wind of this. "At least a few grams. And this wasn't brownies, either. It was flower. It must have tasted like shit."

Had it been brownies, Yogurt's owner might have been more inclined to take her to the vet, but aside from some excessive drooling, Yogurt seemed mostly unfazed—unlike her human. This was in a state without legal cannabis, a state where an eighth of weed still set you back $50.

"I don't know if Yogurt learned her lesson, but I did," the human told me. "Always put your weed on a shelf."

Reports of pets eating weed have increased in states with legal cannabis. According to the American Society for the Prevention of Cruelty to Animals (ASPCA), calls to its poison control center hotline have gone up since 2016. Seattle vet Laura Monahan from the Atlantic Veterinary Hospital also says her clinic has seen an increase in cannabis-related visits in the past couple of years.

"Occasionally, they will eat a joint—but more often, they've consumed an edible product with THC," Dr. Monahan says. In that case, the vet may be dealing with two potential poisons—weed and chocolate. Despite the rise in cannabis consumption, the clinic still gets more visits from pets that have ingested over-the-counter or prescription medications than pot.

When pets do consume pot, it can be scary. Last year, Jen Gunter, a doctor in Marin County, California, found that after a run, her 3-year-old chocolate Lab, Hazel, was twitching uncontrollably, drifting in and out of consciousness, and unable to support her own weight. Gunter took Hazel to the emergency vet, where a toxicity screen showed signs of cannabis poisoning. Gunter thinks Hazel must have eaten some errant pot on their run. The high didn't last long: Hazel recovered within a day, and Gunter told me that today she is "perfect." The only long-term impact of the experience, she says, was the vet bill.

Still, serious complications can and do happen. A 2012 study published in the Journal of Veterinary and Emergency and Critical Care found that the "ingestion of baked goods made with medical-grade tetrahydrocannabinol butter"—or THC butter—has resulted in the untimely deaths of two doggies.

If your dog does steal your stash, the best thing to do is watch them closely. Symptoms may include lethargy, drooling, urinary incontinence, glassy eyes, a sudden lack of coordination, dilated pupils, vomiting, and, in about a quarter of dogs, agitation and excitement. If your dog is acting funny, take him or her to the vet immediately. While ultimately most dogs will recover, a small percentage will insist on putting on Led Zeppelin and telling you all about the dream they had last night. In this case, it's best to ignore them.

As for Yogurt, her first experience with weed was also her last—at least as far as her owner can tell. "I don't think she's ever eaten pot again," her person told me. "But a few weeks ago, she got out of the yard and came home reeking of skunk, so who knows?"