Why Are Dogs Cute?

Here is the scientific answer. 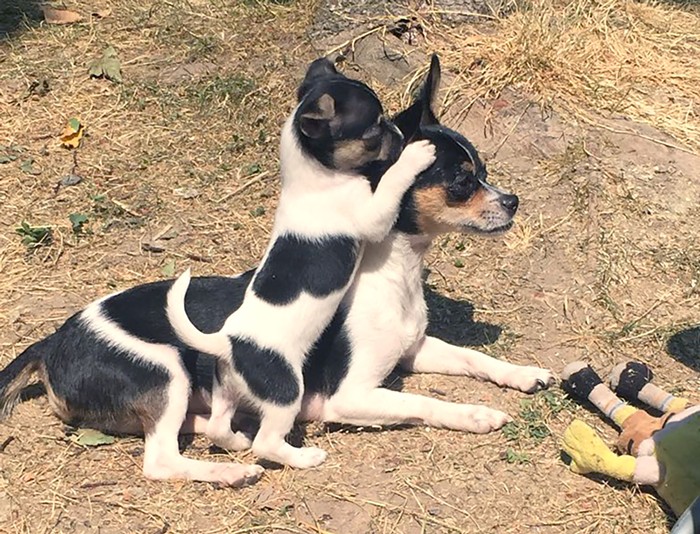 A dog mother doing her best. GILLIAN ANDERSON
Back to article

I would venture that things don't "evolve" as much as they change, for better or worse. The Pekinese was bred from a wolf, evolution had nothing to do with it.

@1 True. But it is amazing that a species has the evolved the potential for such astounding genetic variation that it can be tapped so easily by selective breeding.

As for the rest of the article. Pretty much all baby mammals are "cute." Mammals leveled to care for those traits in the young. Then again adult lions, tigers and bears are cute (oh my). And their evolution has nothing to do with interference by human section. But I suppose cute is subjective. And we may not find them cute if they were going around eating us regularly.

I've heard (somewhere) that "cute" is the eye-to-head ratio that we find appealing. (Hence those insipid "Precious Moments" creatures that go too far, but you get my point.) As ProfessorHistory mentions, most animals that are around this age - where this would be of a closer ratio - are considered cute, even the ones that we know become pretty ugly and terrifying later in life.

@1, thank you. Came to lease the same comment with the additional note that individuals do not evolve, only populations do. So if you did leave a group of wolves on an island and came back a few million years later and, by chance, found a group of pekinese, none of the those pekinese would have individual evolved from an individual wolf.

If " evolution is a very real phenomenon...." then why does The Left try so hard to stop all evolutionary progress by trying to stop species from going extinct?
That is not very scientific...

baby ducklings are cute and I doubt that is an evolutionary adaptation to human benevolence. Or the eye-to-head ratio.
'Cute' is rather an interesting concept to explore, subjective as it is.
Most examples given so far are universally recognized as cute, but then you get to mice or baby squirrels- cute to some but some folks (me) find them repulsive.

@1 You are limiting the term "evolution". It can apply within species, and it can mean both
natural and "unnatural" selection. The Pekinese most definitely evolved from a larger animal, even if it is the same species and one species was doing all the work.

No, dogs that happened to resemble human babies the most became most likely to survive.

Genetic mutation is random. It does what it does, and the environment selects the winners.

It’s a painstaking process. A breeding program run by humans might introduce an element of determinism and speed things up, but the original domestication of wolves, I am guessing, happened the more traditional way: by accident. Some wolf mutated to be more sociable and was lucky enough to run across a human.

Most of the time, human whim is a much more destructive environmental force. If you aren’t a useful species, we dispose of you, usually by ignoring you as we steal your resources (we burn your forest down until you starve so we plant coffee or sugar cane). Or we introduce our favored animals, which kill you. Dogs, for example, are theorized to be part of the extinction of the dodo.

Not so “cute,” after all. Cute is not benign. Cute, like all seemingly harmless human impulses, is cruelty in disguise.

The real question is, with so many frickin' dogs running all over the place (veritable "hund stadt", amirite?), why don't we eat them more often? Other culture's point the way, they are known to be tasty. And the younger the more tender. Does "cute" equal "delicious" also?
We need to science this out.

I'm going to fire up the barby... who wants to come over for some empirical testing?
And do you think red wine? or white? or beer. I'm thinking beer.