Free Food Worthy of the Gods

After eating a vegetarian burrito given to me by a Hare Krishna on the Ave, I ventured out to Sammamish for a Love Feast. 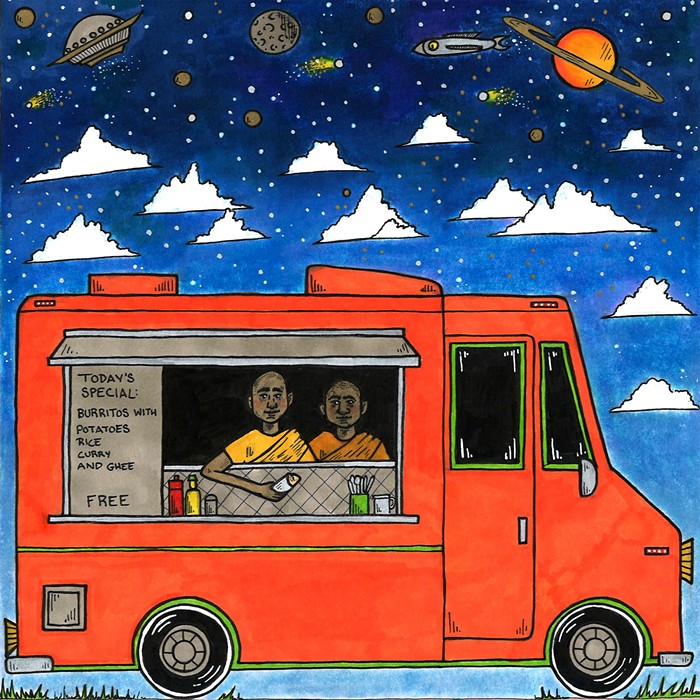 I usually can't remember something I ate more than seven years ago (unless it made me throw up or something). But I still remember that burrito wrapped in tinfoil. A Hare Krishna handed it to me on the Ave back when I was in college. "For you," was all he said, silently waving away my offers to give it back. He went back to chanting.

"I wouldn't eat that," my friend warned me. Well, the Hare Krishna didn't give it to him. I unwrapped the foil.

I think about that burrito more than any other single item of food I've eaten. It was so good, I read the pamphlet he gave me along with it: Easy Journey to Other Planets. Hare Krishnas (they are officially known as the International Society for Krishna Consciousness or ISKCON) are religiously opposed to space exploration, believing that money would be better spent supplying the entire world with quality vegetarian food.

Although the pamphlet originally came out in 1970 (to protest the space race between the United States and the Soviet Union), now that Jeff Bezos is using space exploration as a justification for destroying Seattle, the pamphlet is weirdly locally relevant. The amount of free food that the Hare Krishnas give out each Saturday in the University District from their Free Vegetarian Food Truck gives a taste of what a difference could be made if Elon Musk spent his money on feeding humanity instead of launching a Tesla into orbit.

Hare Krishnas believe there is food in outer space, but none of it is meant for humans. The demigods on the moon drink soma-rasa, which is delicious for demigods but can't be digested by Earth people. For us there is thandai, an Indian milk drink with a cinnamon/almond flavor that is occasionally served from the food truck. What they're serving at the food truck varies from week to week, but no matter what it is, it always tastes good. Since our time on Earth might as well be enjoyable, Hare Krishnas invest heavily in good food.

"It's not food, it's prasada," spiritual leader Harry Terhanian corrected in a recent sermon at the ISKCON Vedic Cultural Center in Sammamish. Each Sunday they hold a Love Feast, a free vegetarian banquet, at the center. I'd been wanting to go for years, but if you don't have a car, getting to their big pink temple surrounded by evergreens is like getting to the moon. There is no bus service remotely close to it on a Sunday.

To learn more about prasada, I finally decided to splurge and head out there. I got there partially by bus and partially by Lyft. I learned that for food to become prasada, it has to be offered to Krishna first. Not even the cooks are allowed to sample the food before it has been presented to Krishna.

Before the Love Feast, we chanted to the altar of Krishna playing the flute while the food for the banquet was laid below the statue's feet. All of Lord Krishna's senses are fused together—so for him, looking at the food is the same as tasting it. The founder of the Hare Krishna movement, Srila Prabhupada, explained the reasoning: "If a tuberculosis patient eats something and you eat the remnants, you will be infected with tuberculosis. Similarly, if you eat food left by Krishna, then you will be infected with Krishna consciousness."

They do not serve homeless people any food they would be embarrassed to serve God.

After Krishna tasted it, the food became prasada and we could eat.

In the dining hall, everybody sat on the floor with their shoes off. Having no tables made cleaning up afterward easy, as men with brooms just walked through the room during the feast, sweeping up anything that happened to spill. On entering, I got a paper cup of thandai and a paper plate. People walking around with metal buckets and ladles dropped enormous piles of food on my plate. At no cost to you, there is chickpea cucumber salad, curried potatoes with peas, and slender basmati rice covered in a curried tomato sauce.

Hare Krishna cooking is vegetarian, but not vegan, as they firmly believe that God loves dairy. The prasada is soaked in ghee (clarified butter), which makes it delicious. For religious reasons, they cannot eat any "foods in the mode of passion." That includes caffeine and hot peppers. If you like Indian food but (like me) have extremely white taste buds that can't handle heat, Hare Krishna cooking is perfect.

I was one of only four white people in the dining hall. And with my shoes off, I realized my feet could star in a haunted house movie about the world's palest ghost. Those who remember Hare Krishnas as being Caucasian burned-out hippies from the 1970s are always surprised to learn that the movement is now primarily Indian. The old Hare Krishna scene crashed hard back in the 1990s following a string of pedophiliac sex-abuse scandals in Hare Krishna boarding schools.

Terhanian, the Sammamish temple's spiritual leader, is a white holdover from the 1970s. His mother was a survivor of the Armenian genocide, and before the feast he gave a sermon condemning racism. But despite the sermon, and all the old Hare Krishna pamphlets depicting white, Indian, black, and Asian children playing together, the temple is obviously primarily meant for middle-class and rich Indians.

But the Love Feast is open to all. If you're looking for a free meal and a sense of community around the holidays, it's worth checking out. That said, my bus trip to Issaquah, followed by a Lyft ride from there, plus a Lyft back to Seattle after the bus stopped running, cost me a total of $66.50.

And while you may be rolling your eyes at the bad stuff Hare Krishnas have done, those same things have been done by basically every other religion on the planet, and those religions don't provide great vegetarian food for free to homeless people. The temple might mostly be for Indians, but their U-District food truck is for everybody.

Comments 6
Tags: Features David Lewis
The Stranger depends on your continuing support to provide articles like this one. In return, we pledge our ongoing commitment to truthful, progressive journalism and serving our community. So if you’re able, please consider a small recurring contribution. Thank you—you are appreciated!
CONTRIBUTE NOW