And Their Fries and Onion Rings Are Literally Called "Munchies" 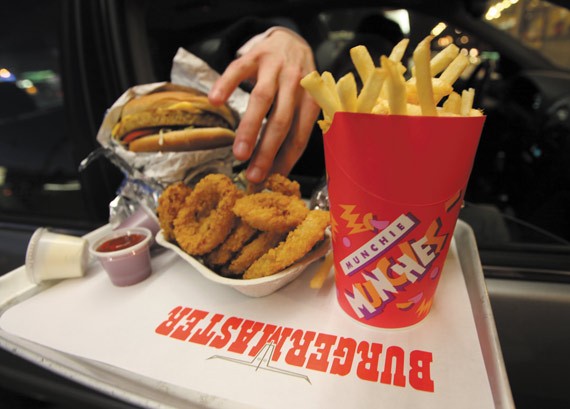 You are not allowed to drive stoned but there’s nowhere better to be already stoned in someone’s passenger seat. Kelly O
Tweet

The Aurora Burgermaster's western-font signage, topped by a huge glowing bull skull, was morbidly fascinating to me as a child who became vegetarian for the same reason I imagine anyone does at 7: I realized on a ranch that beef cattle are cute, like big dogs.

I grew up a few blocks from Burgermaster, and as far as I can recall, the place has never changed. Like the nearby cement elephant and Twin Teepees diner (RIP), the eye-catching sign is quite at home on a strip where business is dependent on inspiring enough curiosity to make people pull off the highway. I didn't fully understand until a trip to the Dancing Bare strip club in grad school that what fascinates me about Aurora is its multitude of advertisements for sex, booze, and every other mysterious and alluring pleasure of adulthood. Ocean Greens, one of the first recreational pot stores to open in Seattle, couldn't have picked a better location than being close to the Aurora Burgermaster.

Also, Burgermaster has veggie burgers, making it an ideal stoner-food destination for me. "I'm so hungry, but I don't think the food I want exists," I told my girlfriend, Mary Anne, one night when I became so hungry while stoned that it woke me up.

As I mentioned, I don't even eat meat. So making a corned-beef cereal sans meat wasn't exactly going to be easy. I ended up constructing a food of some kind out of a savory scone, peanut butter, and chocolate chips. It was glorious. This is the way I get hungry when I'm high—craving the most improbable things and then energetically devouring something only semi-edible (or not edible, like papier–mâché) that magically tastes like it should be featured in Food & Wine.

I would love to go out to eat stoned—there would be far less danger of eating something just because it looks like food—but I'm not yet comfortable enough with weed to be high in large groups of people I don't know. Also, there is the matter of getting to and from a restaurant; it is illegal to drive while stoned. A visit to Aurora pot shop Ocean Greens followed by dinner at Burgermaster with my non-stoned girlfriend behind the wheel felt like a potential step toward being comfortably stoned in restaurants. Also, weed and nostalgia seemed like at least as good a combination as corned beef and cereal.

At Ocean Greens, the old hardwood bar that functions as a counter (the place appears to have formerly been a house, and then a tavern) was full to the ceiling with drawers of weed—more varieties than I'd ever seen in one place. Cabinets of pipes, lighters, grinders, rolling papers, and stoner knickknacks lined the walls. I asked one of the weed salespeople for something to make me hungry and relaxed. He offered me a bag of Suspended Brands' "Platinum Girl Scout Cookies" weed—24.27 percent THC and 0.07 percent CBD—for $15.

The little silver package was decorated with the silhouette of a woman holding a surfboard. It looked like a bag of wasabi peas and felt about as innocuous to buy. It reminded me of my first-ever weed-buying experience, in middle school, minus the danger and the glamour. And yet there was something luxurious-feeling about acquiring a bag of weed as easily as a candy bar and pulling into the Burgermaster half a block away.

Burgermaster is a drive-in burger place. You park and roll down your window, and then someone comes to take your order—and when it's ready, they come back with all your food on a tray that attaches easily to your partly rolled down window. The fries and onion rings are actually served in paper cups with the word "munchies" printed on them, festooned by colorful geometric shapes. Parked next to us was an older guy in well-worn Carhartts who had a very long, thin beard that he wiped his hands on after pushing his napkins into the recycling. He reminded me of my dad's friends from work at the shipyard. In Seattle in the 1990s, that was what everyone's dad looked like.

We got three veggie burgers with cheese ($5.89 each), fries ($2.39), onion rings ($3.49), and a peanut-butter milkshake ($3.09.) I was alarmed by the presence of the words "grilled crab" on the menu (upon further study, it's a grilled cheese sandwich with crab) and confused by something called a Tom and Jerry milkshake (it was hard not to picture blended-together cats and mice).

And I was nervous to smoke in front of our servers, friendly as they were, probably because I associate drive-in uniforms and paper hats with a sort of 1950s Norman Rockwell conservatism. And because it's literally against the law to smoke in your car or even have marijuana in an open container. Also, the most portable pipe I could find was one Mary Anne discovered in a 102-year-old friend's headboard after he died. The carved stone pipe was beautiful, but I wondered how functional it was, and how haunted. I sank as low in my seat as possible. The weed had a bitter, almost metallic aftertaste.

Ten minutes later when our food came, I was incredibly hungry, though I couldn't tell yet if this was because of the weed. Food at Burgermaster is simple but reliably good, especially for anything that incorporates iceberg lettuce. The highlight was the milkshake, whose only detectable flavors were vanilla ice cream and peanut butter—nothing that called to mind a plastic vat with a pump marked "peanut-butter shake."

Back at Mary Anne's place, I took another giant hit of Platinum Girl Scout Cookies from my miniature bong that for obvious reasons wouldn't have fared well in the car. This answered my questions about the functionality of the stone pipe, because I was immediately three times as high as I'd been in the Burgermaster parking lot. I couldn't stop laughing. I thought I would never stop laughing. I rolled all over the bed and then dashed into the kitchen.

"What did you eat?" Mary Anne asked after.

I had eaten the few remaining Burgermaster fries and now-hours-old warm milkshake, both of which were overwhelmingly good.

"The milkshake," I said, my voice trailing off as I tried to find the words. "It was like peanut butter climbing regular butter into a Christmas tree."

A doctor, a pot grower, a cannabis extractor, a weed shop, a policy advisor to the governor, and a stoner film festival talk about this very weird moment in time.