Thank God I Never Have to Roll Another Joint

My Favorite Thing About Marijuana Legalization

2
I, for one, cannot smoke an entire joint of modern weed. Even divided by 1 or 2 compatriots, 3 hits off a joint is my max. So they are, indeed, a WOW.

It's really not that hard to do, but there are such things as rolling machines for the less-than-nimble-fingered.
Max Solomon on October 29, 2015 at 12:20 PM · Report this
3
I roll joints regularly, and smoke a considerable amount of weed. I would have to argue that it is not in fact, a waste of weed. Bowls continue to burn too, and joints burn out quickly if not smoked. I put my roaches in an ashtray, and when I have an appropriate amount collected, I just tear them open, regrind the weed and smoke a killler "Frankendoobie" a process I call "Emergency redoobification". Amateurs. ;-)
Kwizard on October 29, 2015 at 12:30 PM · Report this
4
i guess if you always have money for weed you dont have to worry about making your stash last
ICwater on October 29, 2015 at 12:39 PM · Report this

5
My favorite part of legalized weed isn't pre-rolled joints. You're still smoking it, whether you roll it yourself or not. While I like the pot high, I've never enjoyed smoking it, regardless of whether it was a joint, bong, vaporizer, hookah, or whatever.

No, my favorite part of legalized weed is the edibles. Way easier on the lungs.
Reverse Polarity on October 29, 2015 at 1:09 PM · Report this

When combusting, I use a small glass one-hitter; easily cleaned.

Rolled joints are great for living/re-living the Seventies, but really dumb - so much just burns into the room.

Karlheinz Arschbomber on October 29, 2015 at 1:22 PM · Report this
7
While I certainly recognize the health benefits of consuming over smoking, I do find the effects to be noticeably different. Consuming takes longer to kick in, and for me at least the high is more full-body than the faster, mostly brain-high I get with smoking.

But so far as joints are concerned, yeah, in the days before hydroponically grown, genetically-modified cannabis extracts that could be smoked with a small e-cig style vape pen, joints had the distinct advantage of being light, portable, relatively discrete and easily shareable. Bongs and water pipes are fine, so far as they go, but for the most part they're not very practical for public consumption. One-hitters & pipes require frequent re-loading and most people would be rather adverse to dropping them in the event of a sudden confrontation with someone you didn't want to have seeing you with it. And let's face it, the weed of the '70's and '80's, with very rare exceptions (e.g. Thai Sticks or hash oil) wasn't terribly potent to begin with, so you had to have a fairly substantial amount to get high, and particularly if you wanted to get several people high at once.

8
COMTE@7: The weed in joints in my youth, it was like inhaling burning newsprint. Harsh and very little effect. The local shit on Oahu is a reminder of those days.

In Seattle, I prefer the smoking version - and yes, the one-hitter experience is a bit fussy and manual.

For 'public' consumption the oil-cartridge pens win, hands down.
The candy lozenges are great for mild sleeping aids, or long flights.

12
Waste of weed? I mean, yeah, it keeps burning, but seriously: You're telling me you've never put a roach in a pipe?
disintegrator on October 29, 2015 at 4:15 PM · Report this
13
I have never been able to roll a good joint. I have made a few "passable" ones after a few tries....but honestly i've never had any problem. If you got weed and papers, just shout "can someone roll a joint for me?" and someone will come.... someone always comes. smoke them out and the joint will be perfect everytime. and you've just made a new friend!
Nihilist Apatheist on October 29, 2015 at 10:14 PM · Report this
14
I work in the legal weed industry. Here's how pre-rolls are made:
The paper and roach are rolled into a cone, which is very easy without any product to manage. The cones are loaded into holes cut into a tray. The scrappiest, shittest shake at the bottom of the bag during nugget packaging gets dumped onto the tray and packed into the cones.
So you're overpaying for otherwise unsellable pot. I'd suggest you buy fresh flowers, grind it up yourself, roll your own cones, and pack the quality, ground pot in manually.
hersh on November 2, 2015 at 10:54 PM · Report this
15
Your editor indulged you. "Brevity is the soul of wit."
kallipugos on November 3, 2015 at 6:26 AM · Report this 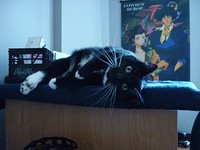 chibby on November 3, 2015 at 7:11 PM · Report this
17
go buy some pre rolled cones, all you have to do is fill it with whatever you want to smoke and youre in business. and get a grinder if youre big on joints, it'll burn much more evenly and pack much better
orgasm on November 5, 2015 at 11:46 AM · Report this
18
@ #7,8 and 16: Disagree on the quality of vape pens and oil cartridges sold...they haven't quite nailed those things yet.....kinda like the difference between going to Schick Shadel and Malibu Passages if you get my drift....
EonBlueApocalypse on November 11, 2015 at 7:32 AM · Report this